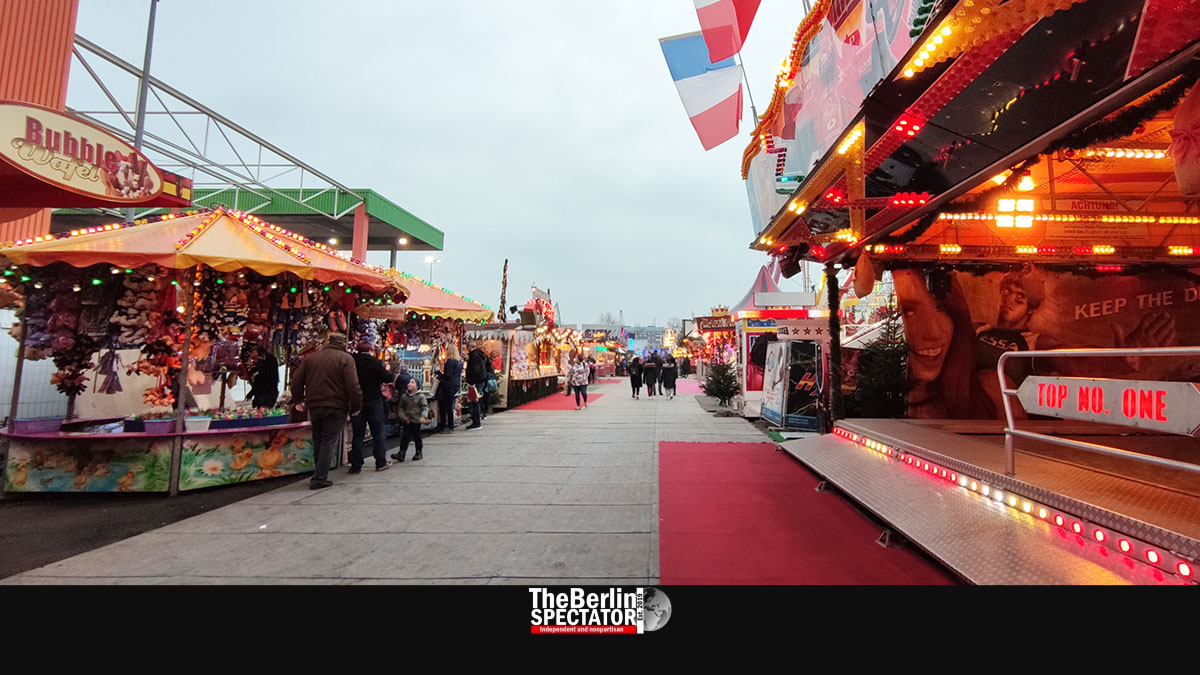 Located in the area of former East Berlin, Lichtenberg is a district known for its ugly satellite towns. This is where we found an unconventional ‘Christmas market’. Squeezed in between furniture stores and apartment blocks, it brings some colors into the grey atmosphere.

Berlin, November 17th, 2021 (The Berlin Spectator) — Landsberger Allee is a major traffic artery in Berlin. Follow it all the way and you will end up in some canola field in Brandenburg province. But first, it will take you into the deep gorges of Berlin’s eastern satellite towns. They have is the kind of look you can find in Moscow, Kiev, Sofia and Belgrade as well. In this area, the meaning of the word ‘beauty’ is not known. What would anyone need it for on Landsberger Allee?

After an endless drive and a traffic jam, ‘Höffner’, a giant furniture market will appear on the right. A tiny bit further east, a second furniture store comes up. This time, it is a Swedish one. Here, in between big stores and within sight of those mostly grey apartment blocks, a million lights are attracting people. All of those bulbs make this location look like the Las Vegas Strip. They are attached to all kinds of fairground rides and food stands.

The organizers call this a Christmas market, but ‘Winterzauber’ actually is a fair which wants to be a Christmas market because this label will attract more people. On Sunday evening, the place was crammed, which is exactly what the owners of all of those fun rides had been hoping for. But, because of the alarming Corona situation, the ‘Winterzauber’ management probably feared the authorities would close their fair. So they quickly switched to ‘2G’ mode, in order to prevent a closure, and to keep visitors safe. This means only vaccinated and cured persons may enter. As a result, less people have been showing up since.

Up in the Air

Actual Christmas markets in Berlin are scheduled to open on November 22nd, if they do not end before they begin because of the bad Corona situation. This one, ‘Winterzauber’, opened on November 5th. The Christmas decoration on some of the fun rides is the only Christmassy element here. But those roasted almonds they sell are just the right treat for the season. Are those chocolate-coated Bananas decadent? Yes, but they do taste well. Steak sandwiches, sausages and sauerkraut, anyone?

For those who feel the inner urge to spill the food they just consumed all over this fun fair should hop on the ‘Super Giant’. This fun ride will actually fly people to the edge of the Earth’s atmosphere and spin them around like crazy. Just make sure to put your cell phones and ivories in a safe place. Just watching people being catapulted up in the air here is scary as hell. At least nobody spilled his roasted almonds on our reporter on Tuesday evening.

There are more ways to get scared at ‘Winterzauber’, including the tunnel of horror, a ride which is not too Christmassy, but probably diverting. Not scary enough? Remembering the Corona situation in between rides is yet another effective approach.