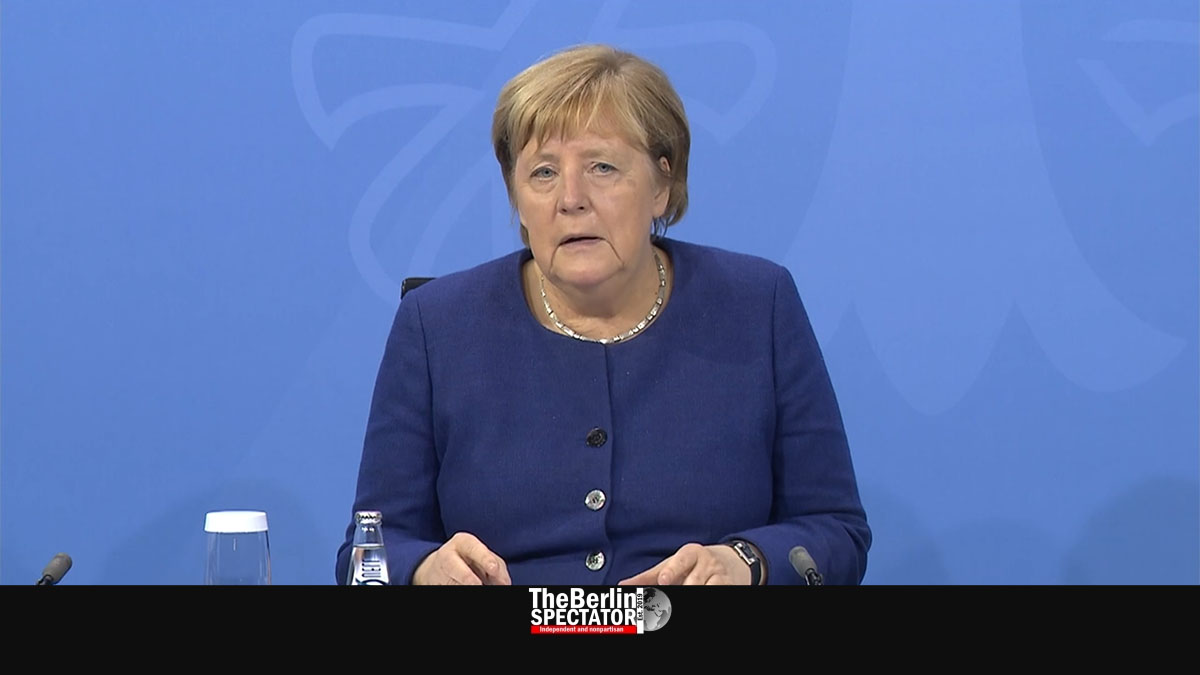 Because unvaccinated persons do not only put themselves in danger, but everyone else too, they will now be excluded from public life. The departing Chancellor Angela Merkel and the heads of government of Germany’s federal states took some decisions.

Berlin, November 18th, 2021 Update: 9:36 a.m. CET (The Berlin Spectator) — Germany’s federal government and the country’s federal states decided to implement a number of anti-Corona measures to slow down the exploding infection numbers. Yesterday, the Robert Koch Institute had reported more than 65,000 new Corona cases within 24 hours. It is the highest number of new infections of all time. The acting Chancellor Angela Merkel and her likely successor Olaf Scholz participated in another ‘Corona conference’. So did the First Ministers from the sixteen states.

After the meeting, Angela Merkel presented the results in Berlin. She stated the containment of the exponential growth of the Corona infection numbers in Germany and quick booster vaccinations had been the two main points in the discussion. The situation was grave, also because the doubling time in regard to the infection numbers was 13 days right now. And every 23 to 24 days, the number of Corona patients in intensive care was doubling, the acting Chancellor explained. She said the country could not afford another doubling.

“We know we could be in a better situation if the vaccination gap was not as large as it is”, Angela Merkel said. Many of the measures that needed to be taken now would not have been necessary if more people had decided to get vaccinated against Corona. “It is never too late to get vaccinated”, the Chancellor said in front of the press. According to her, 27 million persons need to get their booster shots now that the Permanent Vaccination Commission recommended them for everyone from 18 years of age. Those third vaccination shots are supposed to be administered five to six months after the second shot.

In public transport, ‘3G’ rules will have to be adhered to. Vaccinated, cured and tested persons may enter buses and trains. The passengers’ documents will be checked along with their tickets, meaning there will be spot tests only because it is impossible for check tens of millions of public transport passengers every day. Germany’s governments, the acting one and the next one, were asked to work on a ‘3G’ rule for work places. Caretakers at foster homes and similar establishments will need to get tested every day.

Angela Merkel, her likely successor Olaf Scholz and the First Ministers also decided to extend the existing aid program for companies affected by the Corona pandemic. It was supposed to expire in December. Now, it will continue until until March 31st, 2022. Nursing staffers will get another bonus, and pharmacists may have to take part in the vaccination campaign, in order to speed it up again.

This early morning, the Robert Koch Institute reported an extremely high number of new infections yet again. There are 52,970 of them. Since yesterday, 201 Corona patients died. Germany’s Seven Day Incidence is 340.7. Rottal-Inn county in Bavaria now has an Incidence of 1,423. Even 423 would be far too high. Another eleven German counties have reached four-digit Incidence levels. One of them is Elbe-Elster in Brandenburg, the others are located in Bavaria and Saxony. The entire state of Brandenburg stands at 507.1, which is extremely high, but the situation in other states is even worse, namely in Thuringia (585.4), Saxony (593.6) and Bavaria (625.3). Berlin’s Incidence level is 346.0.