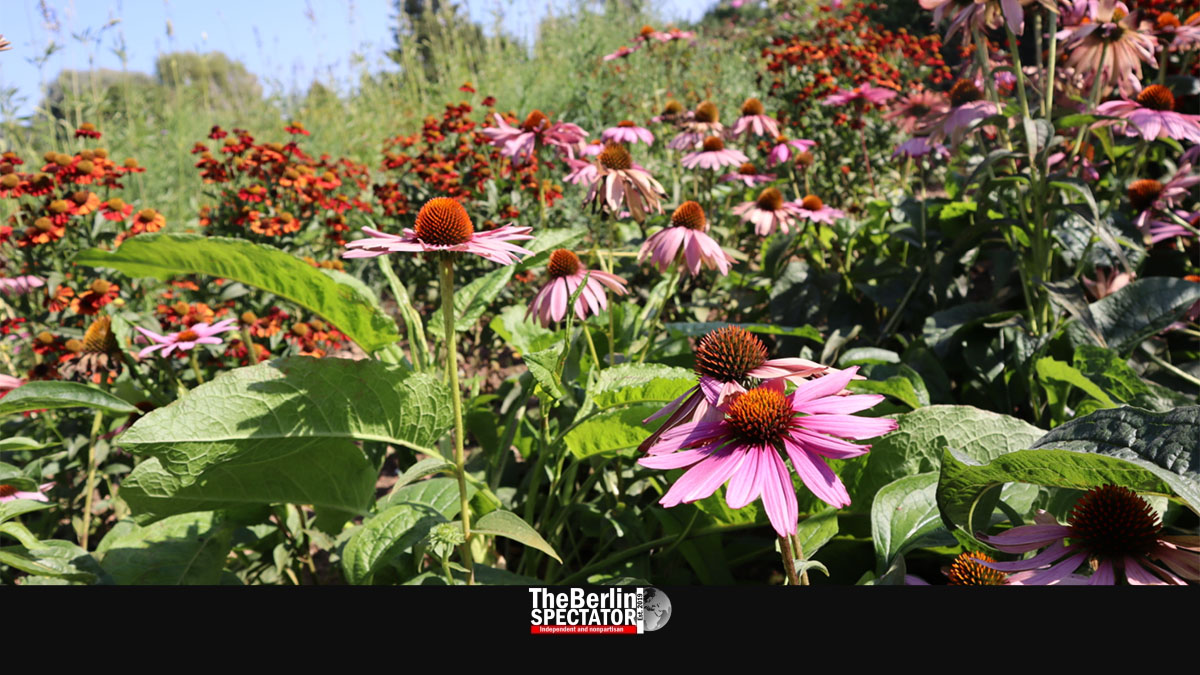 Half a year ahead of the State Garden Show in Beelitz, the event is already being prepared. Expect truckloads of beautiful flowers in all colors and thousands of other plants.

Berlin, November 21st, 2021 (The Berlin Spectator) — So, you want to experience a botanical overkill? You want flowers all over the place, as far as the eye can see? You need the smell of roses and hundreds of other kinds of plants? Then you should head to Beelitz, a small town in Brandenburg, in spring. The State Garden Show is scheduled to commence on April 14th and last for 201 days, until October 31st, 2022.

So far, Beelitz is known for three things, namely its Treetop Path, its spooky old sanatoriums and juicy asparagus. This spot in Brandenburg province even calls itself ‘Town of Asparagus’. Bon appétit. Now, a fourth “thing” can be added, namely the event the Germans call ‘Bundesgartenschau‘. The organizers announced a “festival for all senses”. The Garden Show is being prepared right now, at the ‘Park at the Nieplitz’, a little river, and at the Arche Gardens.

Brandenburg is putting a lot of effort into the endeavor. The two parks are being renovated and extended. Not only the State Garden Show’s visitors will benefit, but also tourists who will visit Beelitz afterwards, and the locals. The state government in Potsdam is covering all expenses. After another bad Corona winter Germany will obviously go through, a sea of flowers is just the right place to visit in spring. Hundreds of thousands of visitors are expected, also from Berlin, which is only 50 kilometers (31 milers) away.

In the past 21 years, Luckau, Eberswalde, Rathenow, Oranienburg, Prenzlau and Wittstock have presented Brandenburg’s Garden Show. Now, it is up to Beelitz. The town is inviting people for “extended walks between artfully designed flowerbeds”. At this stage, tons of soil and stones are being delivered while trees and bushes are being planted.

Since mid-October, gardeners have also been working on planting many as 1.2 million flower bulbs. There will definitely be a lot of beauty and colors once the cold season is finally over. But this is about more than just plants. One of the largest playgrounds in Brandenburg was just installed on the Garden Show’s premises. Kids will have a lot of fun there too.

Cultural events were announced as well. The Swiss Schlager music star Beatrice Egli will be performing there. So will Howard Carpendale and Vicky Leandros, two more artists known for terrible and cheesy songs. Deborah Sassoon is supposed to deliver excerpts of operas and musicals, Max Mutzke and the SWR Radio Bigband are scheduled to play some quality music on July 24th, 2022. So, it is flowers, other plants, playing and culture. See you there.

The Brandenburg State Garden Show’s website (in German only) can be accessed here. Tickets are being offered in Beelitz only, at Poststrasse 15 and Berliner Strasse 18. Both locations have weird opening hours.