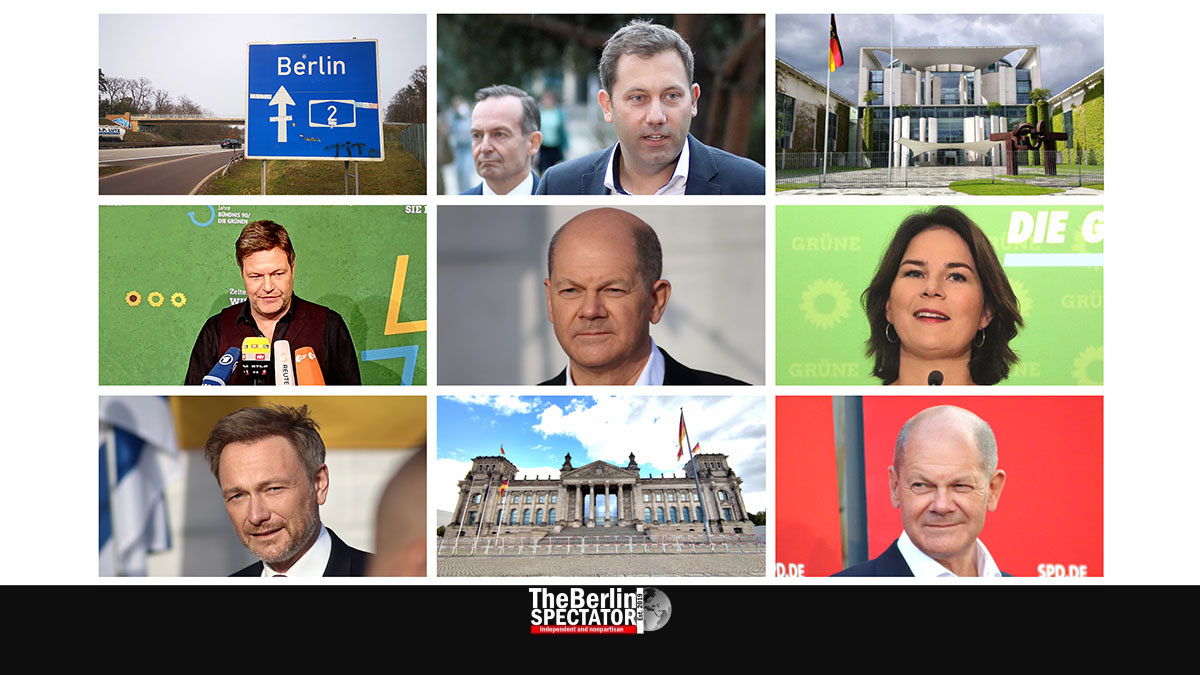 In Berlin, the die is cast. The new government coalition is ready to take over. This afternoon, the three parties involved were going to announce details. Most of those were leaked to the press beforehand.

Berlin, November 24th, 2021 (The Berlin Spectator) — Germany will have a new government in 12 days from now, on December 6th, 2021. This is when the three parties involved in the ‘traffic light coalition’, the SPD, the Greens and the FDP, intend to elect Olaf Scholz Chancellor at the Berlin Bundestag with their majority.

There was a lot to discuss. The official coalition talks had commenced on October 21st. It took a little more than a month to come to an agreement. In 22 work groups, experts from the three parties worked on details. The main negotiation team which consisted of six high-ranking party members who took final decisions. Considering the alignments of the coalition parties are very different, the talks were completed rather quickly.

The center-left Social Democratic Party of Germany (SPD) will obviously populate the chancellery. Olaf Scholz used to be Hamburg’s Finance Senator and First Mayor before he became Vice Chancellor and Finance Minister under Chancellor Angela Merkel, whose 16-year-reign is about to end.

According to German-language media reports, including the ‘Welt’ daily, the left-wing Greens will run the Foreign Ministry. Annalena Baerbock will be the first female Foreign Minister of the Federal Republic of Germany, ‘Business Insider’ and ‘Bild’ reported. Her colleague Robert Habeck is supposed to get a ‘Ministry of Commerce and Climate Matters’. The separate Environment Ministry, if there is one, the Family Ministry and the Agriculture Ministry will go to the Greens too.

Of course, the third coalition partner, namely the center-right Free Democratic Party (FDP), will head several ministries as well. Their chairman Christian Lindner is about to become Finance Minister, if those reports are accurate. His party is supposed to get three more ministries as well, namely those for Education, Justice and Transport. The remaining ministries will be run by the SPD. Their people will be taking over the Ministry of the Interior, the ones for Labor (which they already had), Defense, Health and Development. On top of it all, the Social Democrats will get a new Ministry of Construction and Residence. What the latter aspect shows is that the ‘traffic light coalition’ intends to try to resolve Germany’ affordable housing crisis.

The new German government has many things to deal with, including two of the country’s biggest problems, which are the Corona pandemic and the climate crisis. The other night, the three parties’ leaders Olaf Scholz, Christian Lindner, Annalena Baerbock and Robert Habeck, went to see the acting Chancellor Angela Merkel. They stayed at the chancellery for two hours and presumably discussed the transition and necessary measures against the pandemic.

For most of the 16 years Mrs. Merkel was in office, the SPD was her junior coalition partner. For four years, she changed horses and worked with the FDP, which was part of the government with the CDU’s Helmut Kohl for 16 years as well, after it left the ‘social-liberal’ coalition with the SPD’s Chancellor Helmut Schmidt in 1982. The Greens were part of the ‘red-green coalition’ with Chancellor Gerhard Schröder of the SPD, from 1998 to 2005.

In the past weeks, there were media reports according to which the Greens did not manage to have their say on climate matters. As it turns out now, they actually do. The phase-out of coal energy is supposed to take place in 2030, eight years earlier than initially planned, according to the coalition agreement. Regenerative energy sources are supposed to cover 80 percent of Germany’s energy mix once this decade ends.

The three parties will have to approve the coalition agreement before the new government takes over.