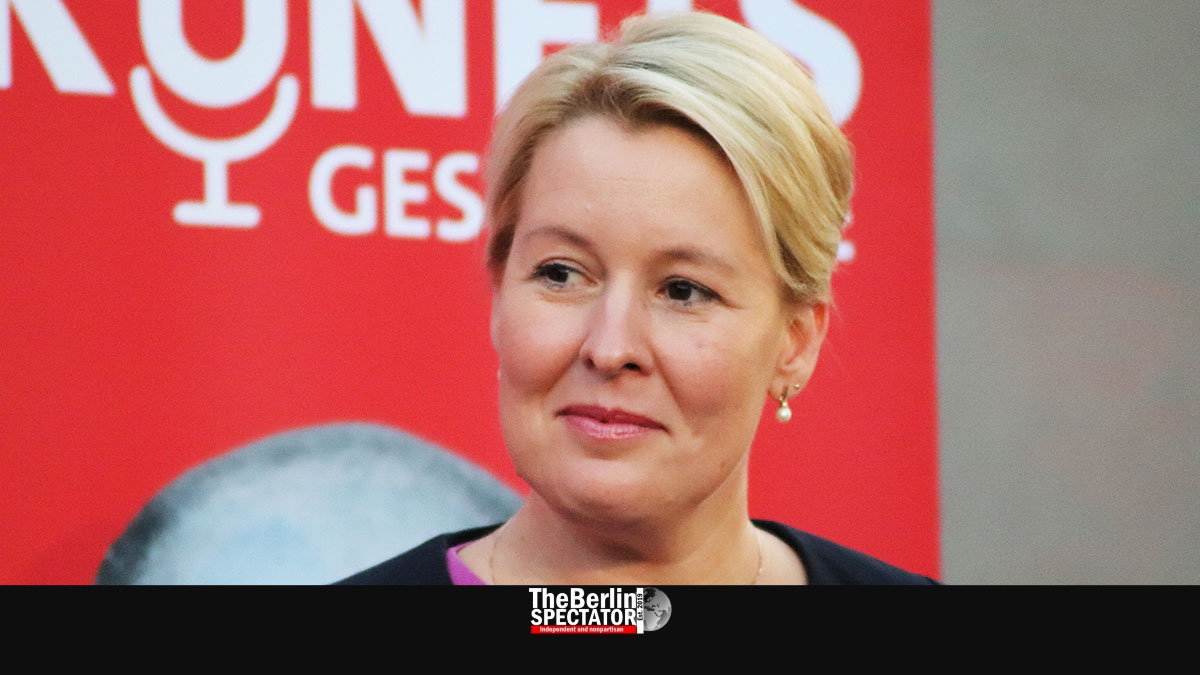 In late September, the Social Democrats (SPD) in Berlin won the state elections. They teamed up with the Greens and ‘Die Linke’ again. Now, they presented an ambitious coalition agreement.

Berlin, November 30th, 2021 (The Berlin Spectator) — On September 26th, 2021, the SPD scored a triple election victory. They won on the federal level, in the state elections in Mecklenburg-Hither Pomerania and in Berlin. Franziska Giffey will be elected Governing Mayor soon. But a few steps still need to be taken beforehand. Now that the negotiators reached an agreement on the coalition’s plans, the three parties have to approve them. Once this is done, the Berlin House of Representatives can go ahead with the election, probably on December 21st.

Franziska Giffey’s coalition talks with the center-left Greens and the far-left ‘Die Linke’ took five weeks. On 149 pages, they listed their plans for the next five years. Their intention is to strengthen Berlin’s culture. Because the German capital is “the number one film and cinema city in Germany”, the future Senate even wants to set up an office responsible for giving out filming permissions. More women are supposed to have leading roles in Berlin’s cultural institutions.

The coalition wants to change Berlin’s education system, by making teachers civil servants again. Some rules at academic high schools, the institutions the Germans call ‘Gymnasien’ (plural of ‘Gymnasium’), are supposed to change, and more schools will be built. Berlin’s security services, including the police, can expect more personnel. The fight against organized crime will be stepped up. Motorists will have to watch it more, also because the new Senate wants to purchase more radar traps. The public transport system will be extended.

Of course, the coalition agreement for the city state of Berlin contains a chapter about climate protection. The city is supposed to become ‘climate neutral’ before the entire country of Germany does. All laws and plans the Senate works on will get “climate checks”. What this means is that climate-friendliness will be the measure of all things, and climate protection is supposed to be added to Berlin’s constitution. The coalition wants to get rid of coal energy by 2029.

Mrs. Giffey and her future coalition partners decided to invest into hospitals more. They will also jump-start a program with the purpose of getting nurses and other caretakers back into the health system. But, affordable housing is probably the most important task for the new Senate. Twenty thousand apartments per year are supposed to be built in Berlin.

“We are a government for everyone”, the future Governing Mayor Franziska Giffey stated. Her SPD will head Red City Hall as well as the Senate Departments of the Interior, of Education, Commerce and City Development. While the Greens will grab the Senate Administrations of Health, Science, Finance and the Environment, ‘Die Linke’ is supposed to be responsible for the Departments of Culture, Labor and Social Affairs.