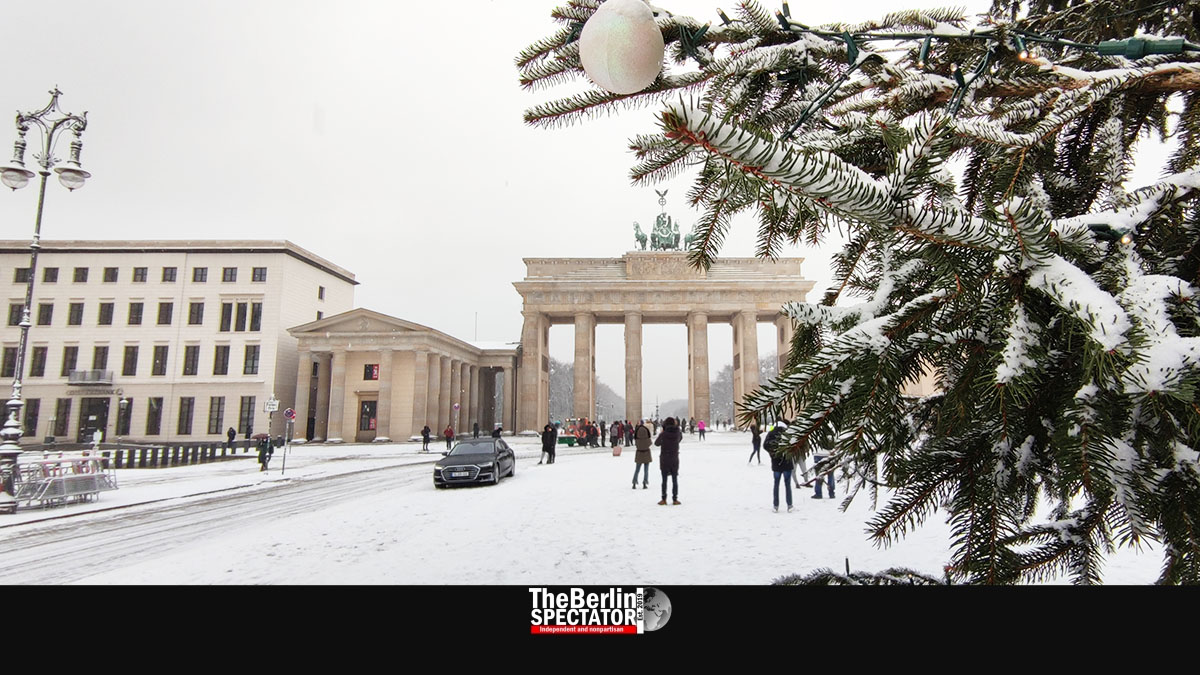 Berlin experienced its first real snowfall of the season on Thursday. It started in the early morning and was supposed to continue until 8:00 p.m.. On major streets, the snow quickly turned into slush.

Berlin, December 9th, 2021 (The Berlin Spectator) — Berlin was covered with white powder on Thursday. No, it was not flour, confectioner’s sugar, washing powder or cocaine, but actual snow. Since the climate is changing, it does not snow that often in the German capital anymore. When it happens, it usually does not last. Last winter, Berliners did have the opportunity to go for sleigh rides.

Today, Berlin’s 9,500 streets, 200 squares, hundreds of parks, hundreds of thousands of roofs and probably twice as many cars turned white. The weather did not exactly speed up the traffic flow, but there was no major traffic jam during the first half of the day, except at spots that are always congested, no matter what the weather is like.

At Alexanderplatz, a major square in Berlin’s eastern city center, building workers continued to dig deep holes into the ground, in spite of the snowfall. Vendors at the Christmas market there prepared their stalls for a long day in the late morning. With snow, any Christmas market will look a lot nicer and more authentic. The only issue is that far more snow should have fallen from the sky. The more snow, the more beauty at Christmas markets.

Police on the Lookout

At the intersection of Otto-Braun-Strasse and Karl-Marx-Allee, police officers who wore thick jackets and winter hats were busy stopping motorists and cyclists who supposedly crossed the street on red. They had two scouts who followed every move on the intersection, and a team of six officers who were in charge of stopping offenders. They were hidden behind an ambulance parked on the bus lane on the north-eastern side.

Further east on Greifswalder Strasse, a major traffic artery which is part of Federal Highway no. 2 and connects Alexanderplatz to Brandenburg province, a vendor offered white Christmas trees today, but they will likely change their color to green again very soon. Berlin’s official Christmas tree at Brandenburg Gate looked nice in the snow as well.

According to forecasters, sleet should be expected in Berlin on Friday, at temperatures around the freezing point. On Saturday, they will drop to -4 to 1 degrees Centigrade (25 to 34 degrees Fahrenheit), but it is supposed to be a dry day. By Tuesday, it will be a bit warmer in Berlin. Meteorologist expect up to 5 degrees C (41 degrees F). What this means is that, after today, the snow will disappear rather quickly. No more white powder is in sight right now.

Scholz on Corona: ‘We Want to Act Quickly and Resolutely when Necessary’