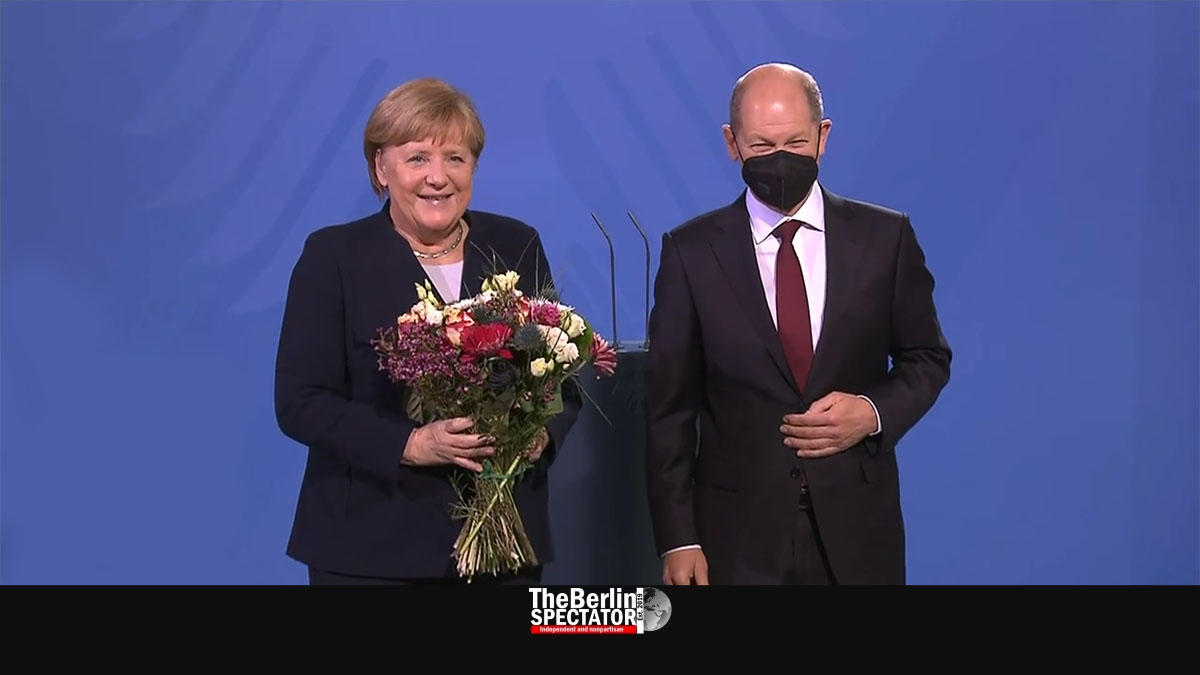 Berlin, December 9th, 2021 (The Berlin Spectator) — Olaf Scholz is the man who was supposed to suffer a bad defeat, according to the polls. When he started his election campaign, heretics in the media and elsewhere said the SPD did not really need a candidate for Chancellor, because the party was drowning. They firmly believed there was no way to save the sinking ship, and they were right, from the perspective of that moment. The closer Super Election Sunday came, the more they became aware of the fact that they were not right anymore, but dead wrong, including the author of these lines.

Then, all of a sudden, it is December 8th, 2021. Before 9:00 a.m., Chancellor Angela Merkel’s Finance Minister Olaf Scholz arrive at the Berlin Bundestag from his home it Potsdam, the capital of neighboring Brandenburg province. Early on, exactly 709 MPs cast their vote. The Bundestag’s new President Bärbel Bas allows everyone to take photos inside the parliament, on this big day only. Many of them, including Olaf Scholz and several guests, make use of it. Yesterday, more selfies were shot at the Bundestag than at Brandenburg Gate and Checkpoint Charlie combined. At about 9:45 a.m., the voting is completed.

From this moment forward, the suspense increases by the minute, like in a Hitchcock movie, until 10:15 a.m.. Mrs. Bas announces the result. Olaf Scholz, the man who believed he could become Chancellor when hardly anyone else did, is actually elected Chancellor, with 395 votes, 26 more than he would have needed. Now, dozens of MPs, including his conservative opponent Armin Laschet, congratulate him. Because of Corona, only few people shake his hand, but they give him presents, including a. basket full of apples. Scholz seems to be enjoying the moment, but he is already in a hurry because he has truckloads of appointments.

Minutes later, at around 10:40 a.m. the star of the day is in the car, on his way to Bellevue Palace, where President Frank-Walter Steinmeier is already waiting. In a two-minute ceremony, he appoints Scholz Chancellor of the Federal Republic. A moment later, the new Chancellor jumps into the car again, which takes him back to the Bundestag. The busiest person in the solar system? Scholz. In the morning, he is just warming up for the rest of the day.

It is 12:00 noon in Berlin. Scholz takes the oath of office. Like his predecessor Gerhard Schröder in 1998, he skips the “so help me God” part. Schröder is in the audience at the Bundestag on this big day. He and hundreds of others watch Scholz get sworn in by Bärbel Bas. For a little while, he sits down on the Chancellor seat, which was reserved for Angela Merkel from 2005 until Tuesday of this week. Then he has to get to Bellevue Palace for the second time, because Steinmeier is about to appoint the new Ministers. At 12:40 p.m., the new government is in office.

It is great to have a nice lunch, especially on a busy day. At 3:00 p.m. the next important appointment takes place at his new workplace, the chancellery. Berliners call it “the washing machine”, because that is exactly what its north and south sides look like. Angela Merkel officially hands over the building to her “dear Olaf Scholz”. He thanks her with flowers. Transitions in democracies can be so smooth.

Scholz says he would “gladly tie in with the north-eastern German mentality” which had dominated in the building. By saying so, he admits that there is not such a big difference between Mrs. Merkel’s calm, restrained approach and his own. Indeed, their personalities are obviously similar.

For Scholz, the end of the big day is still not in sight. His first cabinet session is coming up. Before it does, he gives a million interviews. On Wednesday evening, Germany’s new Chancellor appears on ‘Welt’, the ARD’s first TV channel and ZDF television while his Ministers take over their new workplaces. Foreign Minister Annalena Baerbock is getting ready for her first trip. Before the day ends, she heads to Paris. Scholz will go there on Friday, when he has at least some more time. Germany’s new heads of government always go to France first.

In the course of the big day, Scholz receives good wishes from President Joe Biden, but also from Beijing, Moscow and other capitals. There is one thing he absolutely did not have the time for, which is handing over the Finance Ministry to Christian Lindner. It will happen today, on day no. 2.