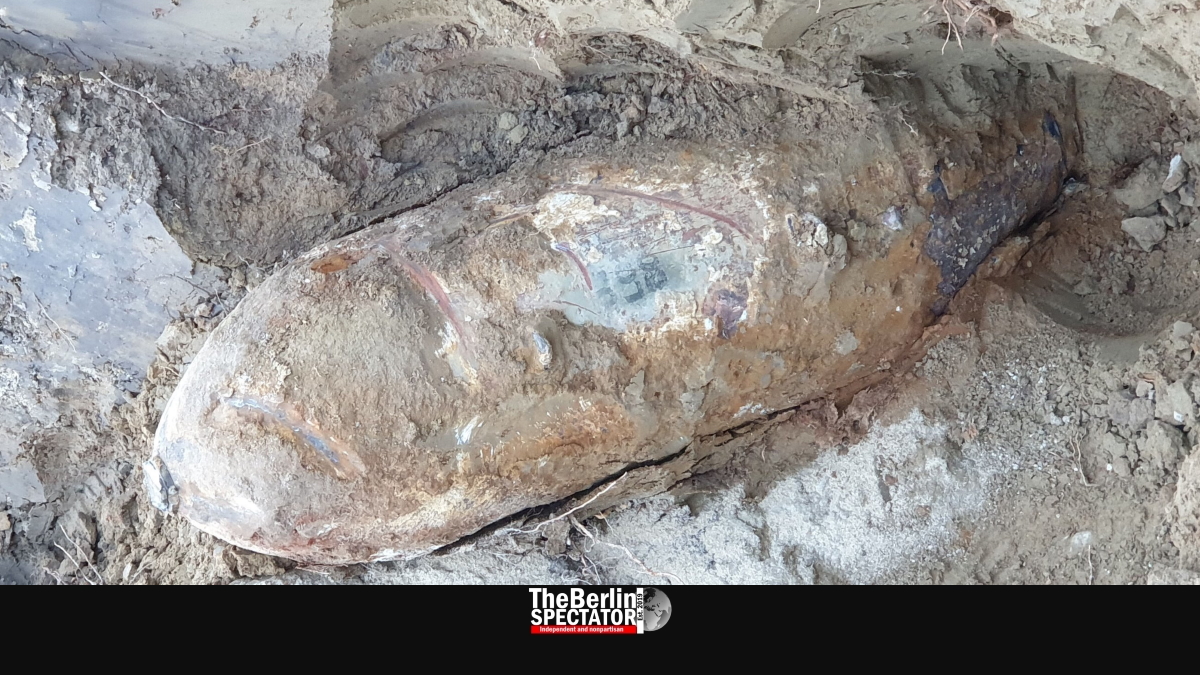 A World War II bomb found on the premises of Berlin’s Jewish Hospital will be disarmed on Sunday. An entire clinic and thousands of residents have to be evacuated beforehand.

Berlin, December 11th, 2021 (The Berlin Spectator) — One could not make this up: At a construction site on the premises of Berlin’s Jewish Hospital in Iranische Strasse (‘Iranian Street’), a WWII bomb with a weight of 250 kilos (551 pounds) was found in November. It obviously did not explode during the Allies’ war against fascist Nazi Germany, and it urgently needs to be disarmed. For this purpose, 15,000 Berliners, including an unknown number of hospital patients, need to be evacuated.

On Sunday, nobody is supposed to be present inside a perimeter with a diameter of half a kilometer (0.3 miles) set up by the Berlin Police Department. The restricted area has to be vacated by 6:00 a.m. on Sunday. It is located in Berlin’s Gesundbrunnen neighborhood. The area includes parts of several streets and one square, including Osloer Strasse, Drontheimer Strasse, Residenzstrasse, Reginhardstrasse, Reinickendorfer Strasse, Nauener Platz, Seestrasse and Groninger Strasse.

Low temperatures and the Corona pandemic make the endeavor a nightmare. Even in pre-Corona times, the diffusing of WWII bombs was complicated. This applies even more now. The people affected were asked to stay with relatives or friends. Those who have nobody to go to will be taken to three collective accommodations on shuttle buses. Residents are supposed to move their vehicles out of the danger zone beforehand, just in case.

Pets are not allowed at the collective accommodations. The authorities asked the affected Berliners to check on their neighbors and inform them about the mandatory evacuation. The police believe there might be elderly people who do not hear well and might not have heard the news, as well as persons who might not understand German.

There are special emergency accommodations for individuals with Coronavirus infections and those who need to be in quarantine right now because they have been in contact with infected persons. There is a phone number affected residents can dial to get more information: 030-9018 46 660. Infected persons will presumably transported to their accommodations separately.

According to the Jewish Hospital its patients will be taken to other clinics starting today, until the bomb is diffused. As many patients as possible are supposed to be discharged today. The hospital’s 500 employees will stay at home until everyone is allowed back into the area.

Berlin’s main public transport provider BVG is reacting as well. On Sunday morning, all ‘U-Bahn’ (subway, underground, metro, tube), bus and tram lines in the area will not be in service.

An experienced bomb disposal unit is part of the Berlin Police Department. WWII bombs are being found at construction sites and elsewhere in Berlin on a regular basis. During the last months of the war, thousands of bombs rained down on Berlin. Hundreds did not explode and pose a danger to people today.

Scholz on Corona: ‘We Want to Act Quickly and Resolutely when Necessary’