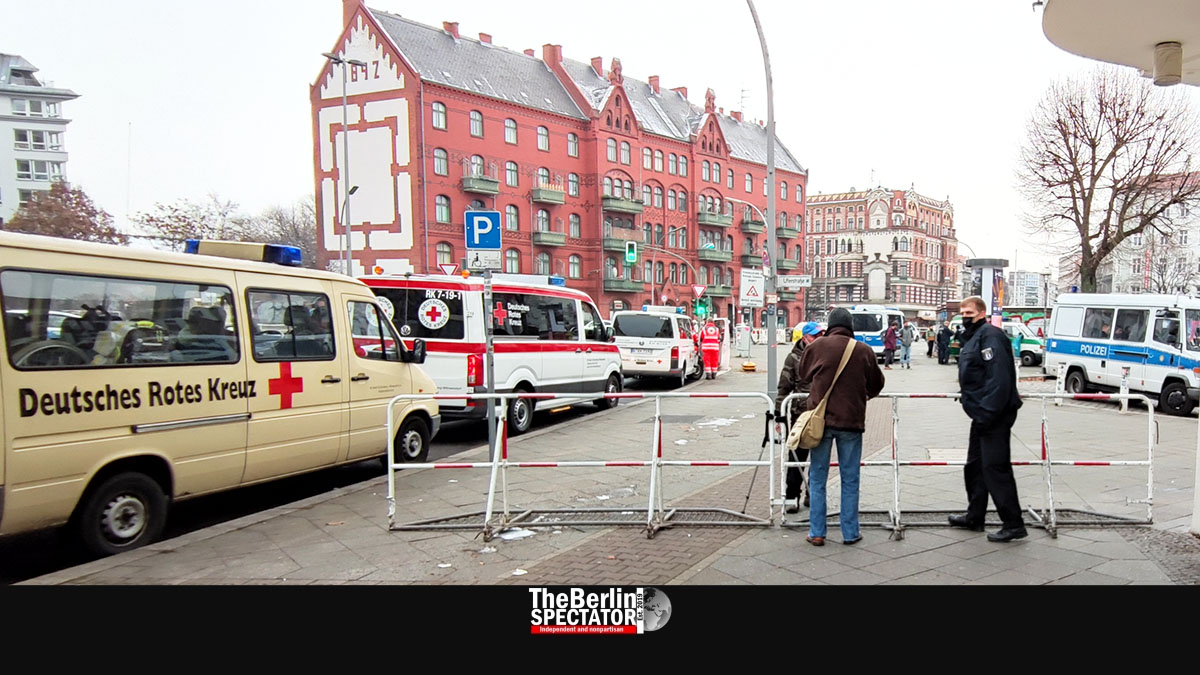 The defusing of an American-made World War II bomb in Berlin’s Gesundbrunnen neighborhood was supposed to take place on Sunday afternoon. First, thousands of residents needed to be evacuated. Police officers went from door to door.

Berlin, December 12th, 2021. Update: December 13th, 2021, 7:33 a.m. CET (The Berlin Spectator) — In Berlin, the Gesundbrunnen neighborhood felt like a ghost town on Sunday in the late morning. All streets in a perimeter of half a kilometer (0.3 miles) were empty. There was no sign of life, with the exception of medics, representatives of the Berlin Fire Department and the police. On Schulstrasse, groups of officers entered all apartment buildings, one by one, rang all bells and knocked on all doors at around 11:00 a.m..

For the Berlin Police Department, spokeslady Dajana Hirth told The Berlin Spectator on site, four hundred officers were involved in the operation. She said apartments in which nobody reacted to ringing or knocking were considered empty. According to her, there was no deadline until which the area needed to be evacuated. She said once the evacuation was completed, the bomb disposal unit would be notified. At this point, the experts will start disarming the American WWII bomb. The latter was likely dropped on Berlin in 1944 or early 1945 and weighs 250 kilos (551 pounds).

Last month, the bomb was found on the premises of the Jewish Hospital. The clinic is being extended. When a hole was dug on the construction site, workers found the explosive. On a regular basis, unexploded bombs are being found in Berlin. Depending on their kind and exact location, smaller or bigger evacuations have to be organized. These days, things are more complicated, because of Corona.

Out of the Danger Zone

At about 11:00 a.m., another bus with evacuees from a retirement home next to the Jewish Hospital moved out of the danger zone, escorted by two vehicles marked with red crosses. At the same moment, the chief of operations for the Fire Department and four medics arrived at an apartment building at the intersection of Schulstrasse and Exerzierstrasse. He said their mission was to transport one patient to a different location. There were emergency accommodations for persons who did not have relatives or friends they could go to. And there was a separate location for individuals with Corona infections and those who were in quarantine.

Berlin’s public transport provider BVG was going to stop all ‘U-Bahn’ trains (metro, subway, tube, underground), buses and tram lines in the area at around noon. In the morning, all trams on the lines 50 and M13 skipped the ‘Osloer Strasse’ and ‘Louise-Schröder-Platz’ stops. The same applied to the ‘U8’ and ‘U9’ lines downstairs in the tunnel.

One of the many police vans in the area was converted into a catering vehicle. Some of the police officers involved in the evacuation got hot tea and coffee as well as warm sausages with ketchup and mustard. Because of the cold, the press officers sent by the Berlin Police Department warmed up in their van now and then, while their colleagues who were in the process of going from door to door marked the buildings they had already checked with chalk on the pavement in front of them. The doors to most apartment blocks remained open.

Traffic around the closed perimeter was tight. Hundreds of motorists who did not know about the disarming or the evacuation wanted to continue on Osloer Strasse. They were diverted into traffic jams in side streets. Cyclists and pedestrians were not allowed in either. Businesses, including fast food places, had to close.

Much later than intended, the evacuation was completed and the bomb disposal unit could finally do its job. Shortly before 7:00 p.m., the explosive was disarmed and residents could return to their homes.