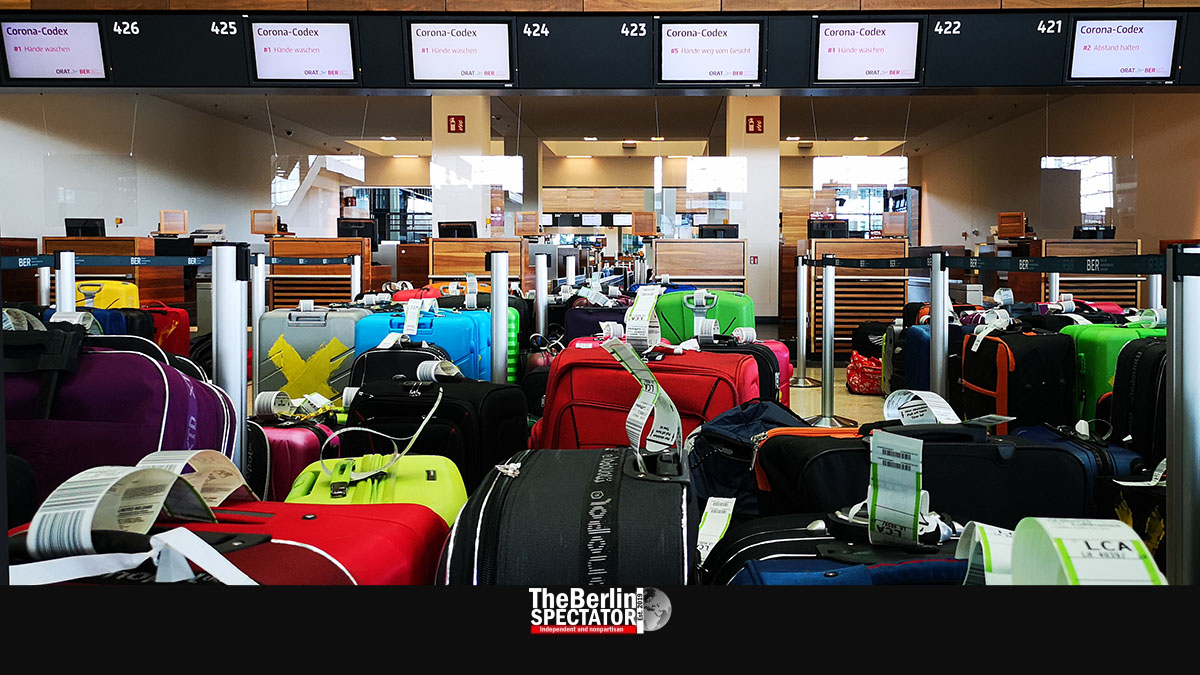 The management at BER Airport is expecting more traffic in the next two weeks. Because of Corona, the processes at check-in counters and security checks will take more time. In order to avoid another big mess, passengers are supposed to adhere to rules and prepare properly.

Berlin, December 17th, 2021 (The Berlin Spectator) — Christmas is coming closer and closer. In Berlin, the holidays commence on December 23rd and end on January 2nd, 2022, while neighboring Brandenburg’s schoolkids are on vacation from December 20th, which is Monday of next week. They too will return to school, or online classes, on Monday, January 3rd. Many residents in the region will be travelling, and quite a few vacationers already chose airplanes as their means of transport.

Aircraft need airports. The Berlin-Brandenburg region has an elegant and shiny one called BER, which opened last year with a slight delay of nine years and keeps on hitting the headlines in newspapers all over the world because of the countless issues it still has. First there was a bad draft, then BER Airport did not manage to deal with all passengers in the fall vacations, then they found bacteria in BER’s drinking water. Now, in and around Christmas of 2021, things are supposed to run smoothly at BER.

Flight passengers always had to follow rules, even in pre-Corona times. Do not take fluids on board, do not transport suspicious packages given to you, do not smoke, do not board the plane in an intoxicated state, fasten your seatbelt, put the back of your seat in an upright position for takeoff and landing, remain seated until the captain has brought the aircraft to a complete halt, and do not forget anything in the seating area or the overhead compartments when you finally leave the metal tube with wings you were transported on, almost at the speed of sound.

Because of Corona, there are more rules, and a good preparation is even more important, especially when the number of passengers more than quadruples compared to last year. Because of the big lockdown the German government implemented ahead of last year’s Christmas holiday, BER Airport only counted 150,000 passengers during the vacations in 2020. This time, they will have to process 640,000 of them. This is a lot more than a year ago, but only about half the number the former airports Tegel and Schönefeld registered around Christmas in 2019, before the virus hit Europe.

Before those passengers arrive at a total of 118 destinations in 46 countries, they need to get to the airport and go through all of those annoying procedures. The more they adhere to the rules, and the better they prepare, the smoother the experience will be for everyone. Masks and keeping one’s distance are the standard Corona rules that still apply. Of course, the distance part does not work too well on those flying metal tubes, does it?

Apart from the obvious, the airport management is asking all passengers to check what kinds of documents they need when they arrive at their destinations and prepare those ahead of time, in order to avoid trouble. Also, they are supposed to plan their trip to BER Airport properly and remember that the ‘3G’ rule applies on public transport in Germany. This is not about G-forces that press people into their seats, but about being vaccinated, recovered or tested for Corona. Everyone is supposed to bring along all required documents, including digital vaccination certificates. And they should be ready to show them to airport staffers at a moment’s notice.

There is more: The airport management wants people to pack their baggage properly. Only one piece of hand luggage was allowed per passenger, it says in a press statement sent out by BER Airport. What about Ryanair passengers who booked trips with two pieces of hand luggage? They will probably be confused yet again. All passengers are supposed to be at the airport at least two hours ahead of their flights’ departure times.

On all aircraft, the ‘3G’ rule applies, meaning you need to be vaccinated, recovered or tested for Corona, obviously with a negative result. At all restaurants and shops at BER Airport, the ‘2G’ rule needs to be followed, meaning Corona tests are not good enough. Being vaccinated or cured within the past 28 days to 6 months is required. There is yet another request by BER Airport’s management: Have your boarding pass ready even before it is your turn at the security check.

Have a good flight. That’s an order. And see you soon.