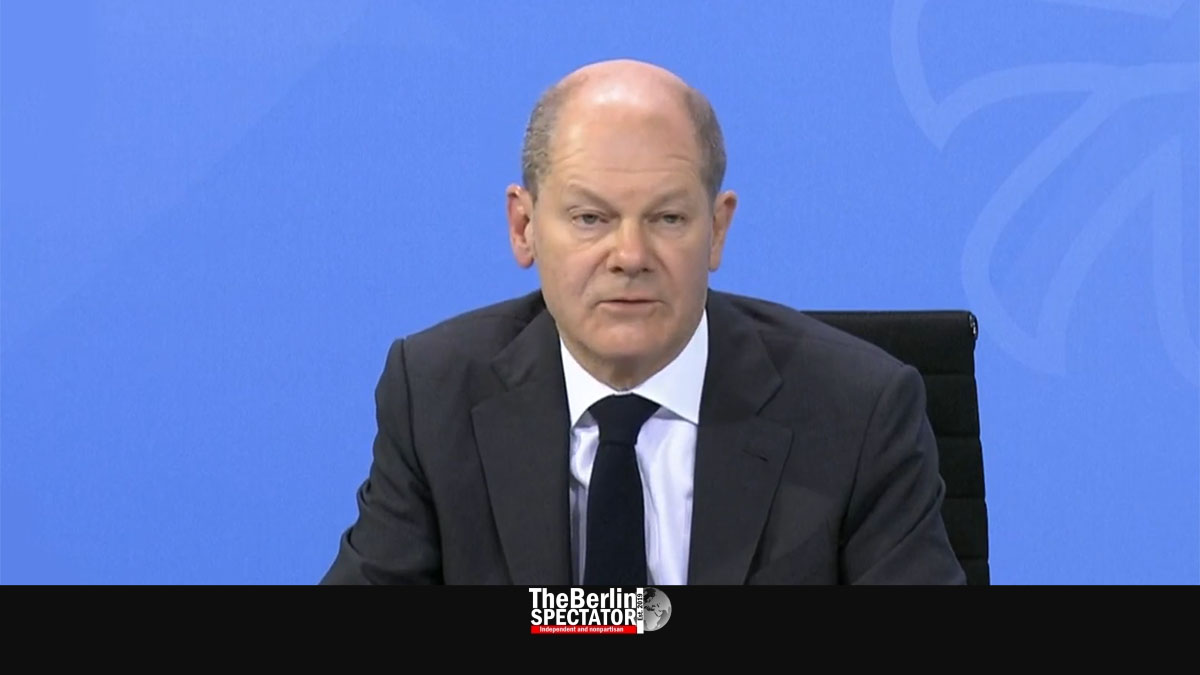 Chancellor Olaf Scholz held another Corona conference with the heads of government from Germany’s federal states on Tuesday. The outcome is a list of strict measures that are supposed to slow down the Omicron mutation of the Coronavirus.

Berlin, December 21st, 2021 (The Berlin Spectator) — Olaf Scholz’ online Corona conference with the First Ministers included Berlin’s new Governing Mayor Franziska Giffey who was elected just a few hours ago. She and Hendrik Wüst, the head of government of North Rhine-Westphalia who also is head of the Conference of First Ministers, were present at the chancellery in Berlin, while their fourteen colleagues took part via video feeds on the Internet.

For a bit longer than two hours, the participants discussed a draft proposal they had put together beforehand. Then, Scholz, Wüst and Mrs. Giffey informed the press in Berlin. Olaf Scholz said the Corona vaccination campaign needed to continue over the Christmas holidays. He reiterated his goal to use 30 million doses of vaccine until the end of the year. The count started in November.

The measures he announced are supposed to take effect “on December 28th the latest”. They include a protection of Germany’s critical infrastructure. He called on hospitals and other existential establishments to activate or prepare their pandemic emergency plans. Their core functions needed to be guaranteed, the new Chancellor said. The critical infrastructure also includes the police, the fire departments, the electricity and water supply and telecommunications services. Experts are expecting exploding infection numbers. The more doctors, nurses and police officers are infected, the more problems Germany will have.

Olaf Scholz also announced the existing restrictions for unvaccinated persons would remain in place, including the contact restrictions for them which were announced last week. When unvaccinated individuals are involved, persons from one household may gather with up to two people from up to one more household. Children up to 14 years of age do not have to be counted.

From December 28th, 2021, general contact restrictions will also affect vaccinated Germans, residents of other nationalities and visitors. Up to 10 people may gather indoors or outdoors. “This is not the time for big parties”, Scholz stated. Especially on New Year’s Eve, this rule needed to be adhered to. He also said clubs, including discotheques, needed to close. The fifth measure is a sales ban on fireworks and firecrackers which had been announced before.

There are at least two reasons why the measures will not apply until after Christmas. Scholz said experts had established that people’s behavior during the Christmas days was not contributing to a quick spread of the Coronavirus. Still, he asked people to get tested for Corona before they gathered with their families for Christmas. Another reason why the government refrained from putting in place the contact restrictions right now is the fact that the new Corona expert council believes the Omicron wave will hit Germany in early January. Some of its nine neighboring countries were already hit.

Scholz said Corona did not take Christmas breaks. He knew everyone was tired of Corona and that the pandemic was exhausting. “Still, we have to stand together and protect ourselves.” First Minister Hendrik Wüst added the recent statement by the Corona expert council had been a warning. Omicron was a lot more contagious than the Delta variant of the Coronavirus. There could be dire consequences for hospitals and in regard to the number of people who needed to be in quarantine. “The measures are our protective barrier against Omicron”, Wüst stated.

At the press conference, Governing Mayor Franziska Giffey said Christmas was the time to gather with loved ones, but this time it also was the moment for caution. She thanked everyone who was contributing to the vaccination campaign during the holidays. The next Corona conference is scheduled for January 7th, 2022.