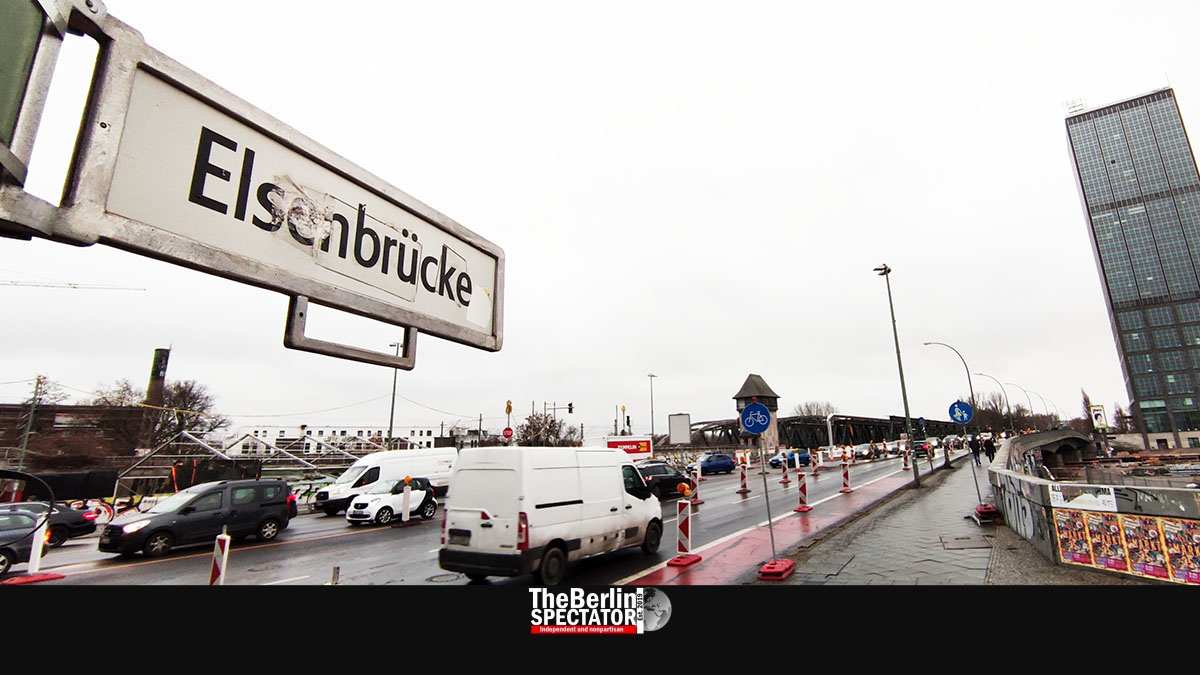 Berlin is supposed to have more bridges than Venice. The Italian marvel with its countless canals has 400 of them. Berlin counts 960. Great. The problem is that many of them seem to be falling apart. ‘Elsenbrücke’ just showed alarming symptoms. It was not the first time.

Berlin, December 22nd, 2021 (The Berlin Spectator) — Hamburg has 2,500 bridges, more than any other city in Europe. Vienna has 1,716 of them. Amsterdam is the city with the third-highest number of bridges on the continent. Here, the count ends at 1,281. And Berlin is the fourth city on the list. If there was a contest for cities with the worst bridges ever, Berlin would probably win it.

Regine Günther was Berlin’s Transport Senator until Tuesday, when a new Governing Mayor and a new Senate were elected by the Berlin House of Representatives. In an interview with the ‘Morgenpost’ daily published the other day, she conceded many bridges of Berlin were “in a very, very bad state”. Yes, when Senators use the word ‘very’ twice in one sentence, and when they follow it up with the word ‘bad’, something is ‘very, very’ wrong.

Every now and then, symptoms appear. In the German capital, one of the bridges that causes bad headaches is Elsenbrücke. Its construction commenced in 1964. Four years later, this important connection between East Berlin’s city center and former Schönefeld Airport was inaugurated. Since Germany’s reunification, the bridge has played an even more important role. In 2006, the Elsenbridge badly needed a renovation. It took three years to improve this bridge across the Spree River. For the next nine years, everything seemed fine.

August 30th, 2018, was a bad day on which the Elsenbrücke was checked by experts. On its underbelly, they discovered a huge crack. A day later, the Berlin Senate had the bridge closed for all northbound traffic. It took another few months until the city came to the conclusion that the Elsenbrücke could not be repaired anymore and that it needed to be pulled down and replaced. Today, three and a half years later, half the bridge is gone. The part that was already removed used to carry the northbound traffic. Motorized traffic in both directions, pedestrians and cyclists are now using the other half.

More headaches were caused on December 13th, 2021, a few days ago. Early in the morning, sensors on the bridge triggered an alarm. There is one thing that should not happen to bridges, namely sagging. But this was exactly what had happened. Because there was a danger of collapse, the bridge was closed to all traffic almost immediately. But the next day, a miracle happened. Things were fine again. Why else would Berlin have reopened the Elsenbrücke for pedestrians and cyclists the next day? Another day later, motorists were allowed to cross it again. As it turned out, the sagging issue was related to the temperature.

Of course, Berliners who are using this bridge are asking themselves how safe it actually is. The bad news is that the Elsenbrücke will continue to be in a ‘very, very bad state’ until it disappears. More bad news? Here we go: Building a new bridge at the same spot will take until 2028, at least. But there is good news too: An auxiliary bridge that is probably a lot safer than the remainder of Elsenbrücke is already there. These days, it will be opened for traffic. Once all traffic is off the original bridge, it can finally fall apart.

Just before Regine Günther ended her term as Berlin’s Senator of Transport, she told the ‘Morgenpost’ she expected the city’s problems with old bridges to last for another decade.