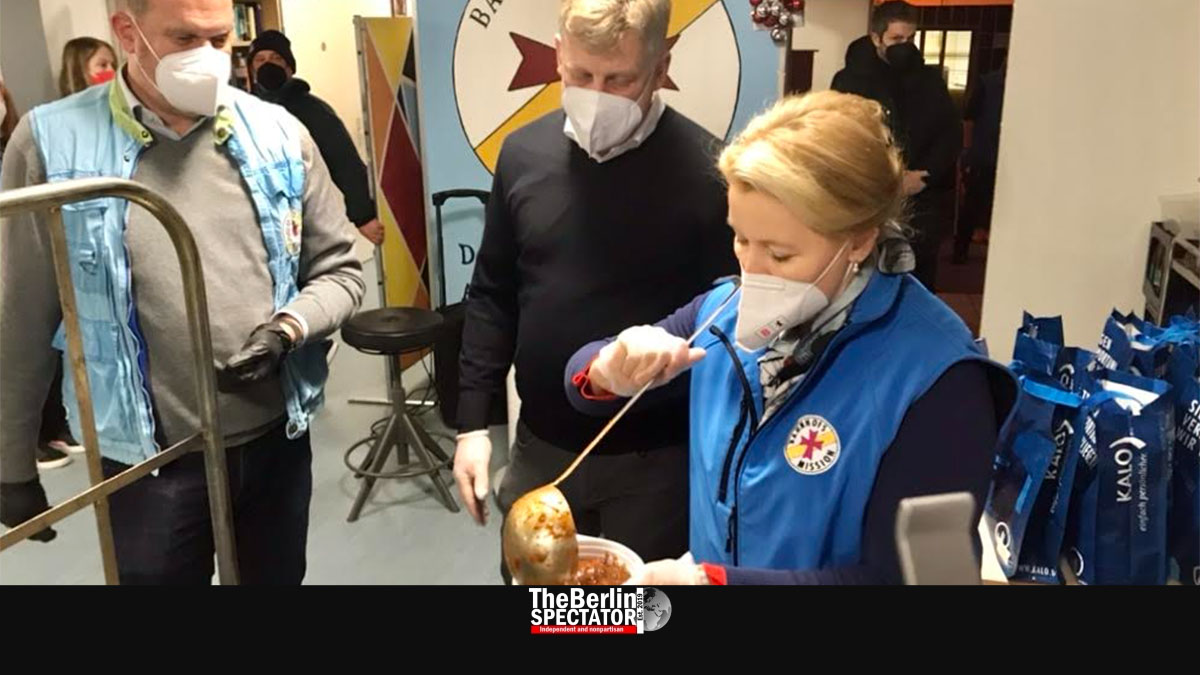 Berlin’s new Governing Mayor Franziska Giffey appeared at a City Mission location at Zoo Station on Friday and distributed food to homeless persons who were lining up. In the meantime, the city was expecting freezing cold Christmas Days.

Berlin, December 25th, 2021 (The Berlin Spectator) —  Christmas, the annual Christian festival that commemorates the birth of Jesus Christ, was celebrated quietly in Berlin, as temperatures were going south. Germany has two Christmas Days. For December 25th, -2 to -8 degrees Centigrade (28.4 to 17.6 degrees Fahrenheit) were forecast, but at least there was supposed to be sunlight for seven and a half hours. On the second Christmas Day, December 26th, it was supposed to be more cloudy and even colder, with lows at -10 degrees C (14 degrees F). These will be the coldest days of the year, so far.

Just days after her election, Berlin’s First female Governing Mayor Franziska Giffey headed to the City Mission at Zoo Station. At the organization’s food distribution center, she joined other volunteers and gave warm meals to homeless persons, wearing a blue vest with the charity organization’s logo. Apart from food, she also gave out Christmas presents.

After her visit, she said she was impressed by the large number of volunteers. Many Berliners were thinking of those who were not so well, Franziska Giffey stated. She thanked everyone involved and said the City Mission would give out 600 meals per day. This was not limited to Christmas Eve. Hygiene articles and other supplies were also being handed out to the homeless.

The Governing Mayor pointed out there were 40,000 homeless people in the German capital. “Not only during the Christmas holiday, the City Mission does a great job lending these people its support.” She announced she would work on supporting the homeless in future as well and reminded people of Berlin’s emergency phone number for homeless people in the cold. It is 030-34397140. People who see homeless people suffer in freezing temperatures should call this number.

On Christmas Eve, both the Catholic and the Lutheran churches as well as congregations that represent other Christian denominations were offering prayer services in Berlin. There will be more services on the two Christmas Days. The Catholics offered services at which ‘2G’ rules applied, meaning only persons who were fully vaccinated against Corona and those who recently recovered from COVID-19 could take part, and some ‘3G’ services which included unvaccinated individuals too, as long as they had fresh and negative Corona tests. The Lutheran church let its congregations decide which Corona rules they would follow.

Many Berliners left the city for the holidays. Suddenly, lots of parking spaces were vacant all over the place. The public service providers in the capital switched to Sunday schedules for both Christmas Days. Because of Germany’s weird laws, all supermarkets in Berlin closed on Christmas Eve at 2:00 p.m. and will not reopen until Monday, December 27th.

Steinmeier: ‘Pandemic Will Not Just Disappear All of a Sudden’