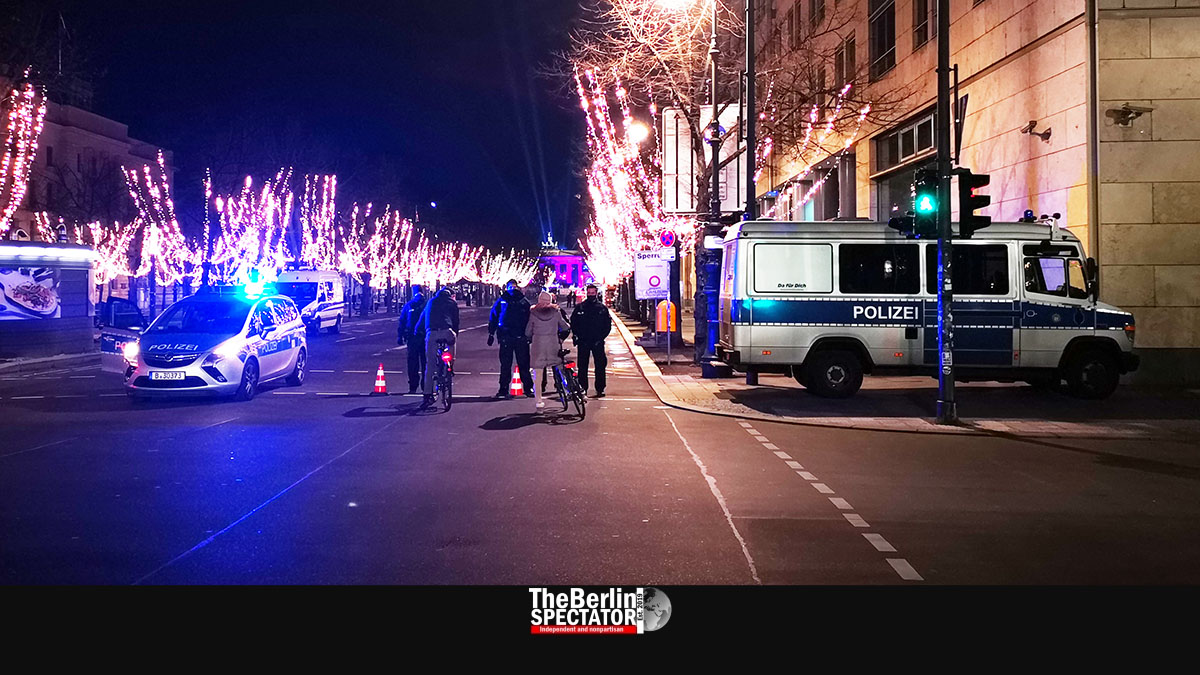 For New Year’s Eve, Berlin put in place firecracker bans in dozens of areas, on top of the firecracker sales ban which applies in all of Germany. The main goal is to keep people from gathering in large groups.

Berlin, December 26th, 2021 (The Berlin Spectator) — In Berlin, restrictions apply on New Year’s Eve. Normally, thousands of people gather at official, private at spontaneous parties all over the city. They dance, drink, light fireworks and firecrackers and have a good time. A few years ago, before Corona hit, police officers were attacked by intoxicated individuals who were throwing lit firecrackers and empty bottles at them. That is why the Berlin Police Department put in place firecracker bans in some areas, including Alexanderplatz, even before the pandemic.

Apart from those violent incidents, fireworks cause other problems too: They scare pets, they pollute the air and the city has to clean up a lot of trash the next day, when pyrotechnical products are being used. Now, in the middle of the Corona pandemic, firecrackers may not be sold. The industry which produces them all year long, for New Year’s Eve only, is supposed to be reimbursed by the government. But the use of such products is generally allowed.

But where do people get firecrackers from, now that there is a sales ban? Some Berliners might still have firecrackers and fireworks they purchased before the pandemic hit. Others buy illegal products made in neighboring Poland. The police already caught some individuals with large amounts of firecrackers who were going to sell them in Berlin. Many offenders probably still do.

In order to prevent large groups of party people from gathering, Berlin listed more than 50 firecracker ban areas which the police intend to enforce on New Year’s Eve. Here they are:

Potsdam, the capital of neighboring Brandenburg province, which is part of the Berlin-Brandenburg region and connected to Berlin by public transport lines, will be a firecracker ban zone in its entirety.

Kelvin Jones at the Gate

At Brandenburg Gate, one of the ban zones, ZDF television has a special permission to stage a big New Year’s Eve event. Andrea Kiewel and Johannes B. Kerner, two national TV stars, will be presenting ‘Willkommen 2022’, a big show that is supposed to welcome the third Corona year. The British–Zimbabwean vocalist Kelvin Jones, his colleague Nathan Evans, a Scottish folk singer, and some German artists will be part of it. But there will not be audiences, at least not on site. As long as the Coronavirus does not spread through TV signals, watching it from home is fine.

Some New Year’s Eve concerts are scheduled to take place at famous venues in Berlin. Here, the ‘2G Plus’ rule applies, meaning vaccinated or recovered persons will be admitted as long as they wear masks and do not take them off until they leave the concert hall. But dance parties at clubs are off. Discotheques and similar clubs are forced to close again in the entire country, for obvious reasons. There are new contact restrictions too. Starting on Tuesday, vaccinated persons may gather in groups of up to ten people. As soon as at least one unvaccinated person is involved, the rule changes. In this case, people from one household may be with up to two individuals from up to one more household.

Steinmeier: ‘Pandemic Will Not Just Disappear All of a Sudden’