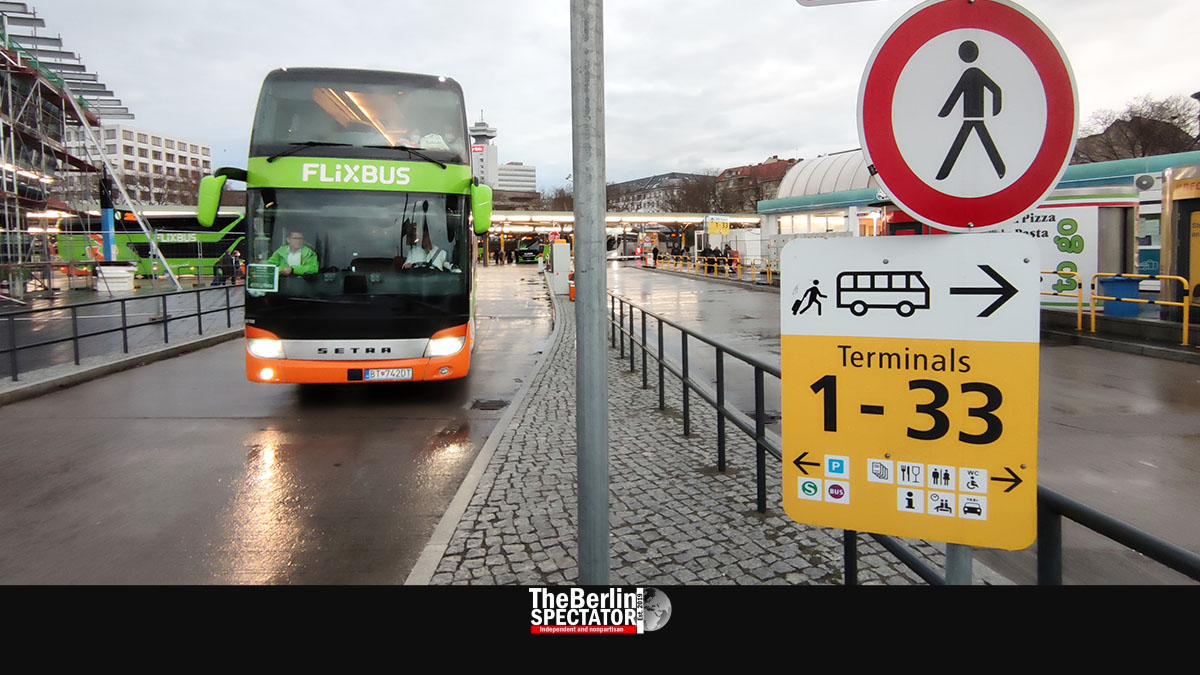 Berlin is having its main bus terminal renovated. But somehow the construction does not seem to advance much. At the same time, the costs keep on increasing. Will the endeavor ever be completed?

Berlin, January 3rd, 2022 (The Berlin Spectator) — The long-distance bus is an attractive means of transport in Germany and most of Europe. Since the market was liberalized, lots of players entered the arena, but only few survived. ‘Flixbus’ has the largest market share today, by far. Every few minutes, one of the brand’s green and orange coaches arrives at Berlin’s central bus terminal while another one leaves it. On Sunday, some ‘Bla Bla Bus’ vehicles appeared as well. There are buses to Warsaw or Zagreb, but also to Augsburg or Dortmund. They go absolutely everywhere.

More and more people travel by coach, also because it is relatively inexpensive compared to the train tickets Deutsche Bahn sells. How about a bus ride to Hamburg, which costs a fraction of the train ride? Or do you prefer to go to Sofia, the Bulgarian capital? The trip via Munich, Salzburg, Villach and Zagreb takes some 32 hours, but it only costs 55 Euro (63 U.S. Dollars or 46 Pounds Sterling), if you get the ticket a few days in advance. A flight ticket costs about the same, but deceleration is exactly what some travelers seem to want. Why get there in two hours if the trip can be 16 times as long?

All those long-distance buses need a proper terminal in Berlin. This is the conclusion the city state’s Senate got to in 2014. So, they piled up 14 million Euro (16 million Dollars or 12 million Pounds). The renovation commenced in 2016. In the summer of 2019, the construction was supposed to be completed. But, apparently, there were some issues. The plans had to be amended when the renovation already was in progress.

In December of 2019, the German capital’s bus terminal looked pretty bad. At this point, passengers got off and entered their buses on a construction site. There was rubble and gravel all over the place, but it was hard to find the entrance for pedestrians, which is why passengers kept on walking across the bus ramp in spite of signs that told them not to. In the past two years, this situation has hardly changed, but the price tag for the renovation has.

In late 2019, the price the planners were calculating with had reached 39 million Euro (44.4 million Dollars or 32.8 million Pounds). By now, the Berlin Senate is expecting another price increase, as the RBB radio and TV network reported some three weeks ago. What this means is that the original costs have almost tripled. So has the time it takes to finish the terminal. This is almost like the airport disaster on a smaller scale.

Located close to the trade fair grounds in the area of former West Berlin, the bus terminal was inaugurated in 1966. It was about time for a renovation. According to West Germany’s laws, Berlin was the only city coaches were allowed to go to or leave from. All other domestic intercity connections were reserved for the monopolist Deutsche Bundesbahn, the predecessor of Deutsche Bahn. On January 1st, 2013, the market for bus trips within Germany was opened, meaning they are allowed to take passengers from anywhere to anywhere. International bus trips never were restricted.

The 5.5 million coach passengers who arrive in Berlin or leave from here every year will see a construction site. For years, the bus terminal has been a big mess, and it still is today. Why does it take so long to erect a two-storey building for waiting rooms and a few snack bars? And why are they still working on some of the 37 bus platforms this terminal is supposed to have, four and a half years into the renovation? Nobody seems to know the answer. What we do know is that the target date for the completion of this black hole was moved forward yet again, to the end of this year.