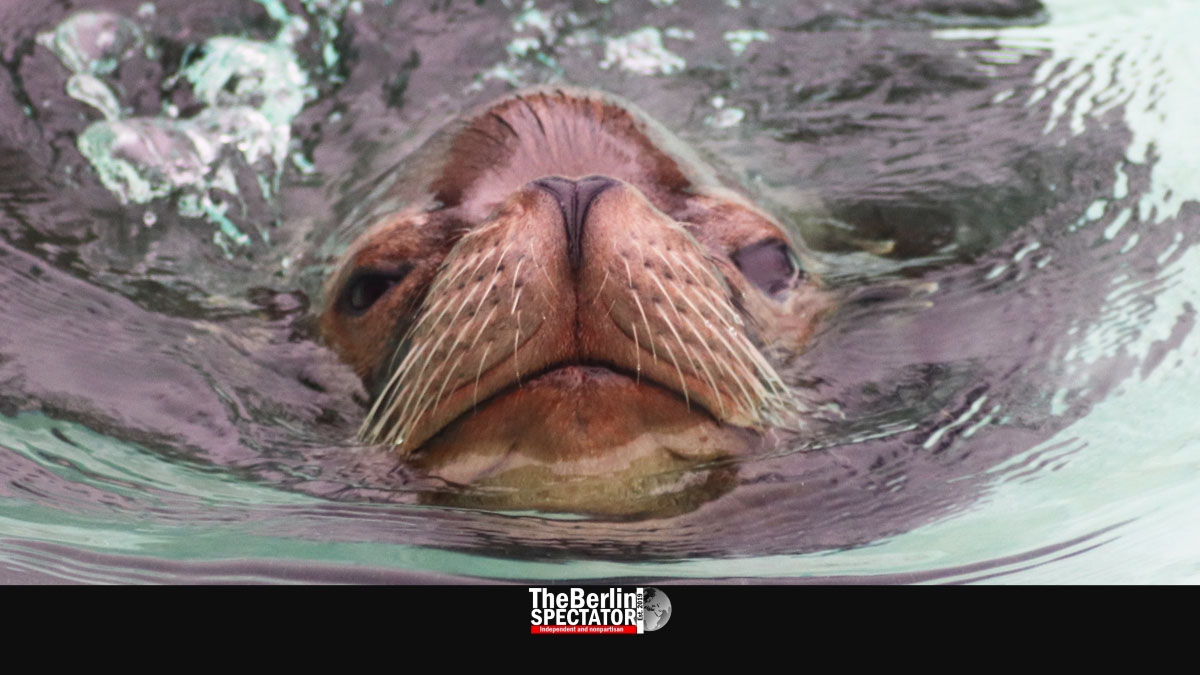 ‘Zoo Berlin’ has a lot to deal with this year. First of all, there is Omicron. Secondly, there are two big construction projects. On top of it all, the zoo’s two biggest stars will be moving out soon.

Berlin, January 14th, 2022 (The Berlin Spectator) — Former West Berlin’s zoological garden was not exactly crowded on Thursday morning. This probably had to do with the 3 degrees Centigrade (37 degrees Fahrenheit) the thermometer showed and the record Corona infection numbers Berlin registered on the 716th day of the crisis. At 10:30 a.m. a kindergarten group appeared at the main entrance at Budapester Strasse with three nursery school teachers. The twelve kids, all dressed in thick winter coats and yellow security vests, could not wait to get in there. They were in for a long walk, but also a lot of fun.

Between the many cages and other exhibits, most paths were empty. But, at least two more children’s groups were on the premises. So were a few mothers with babies, daddies with toddlers, several small families, a young couple and some elderly ladies who were taking their daily walk at this special place this time. Because of the low number of visitors, Zoo Berlin’s 20,000 animals had yet another rather quiet day. Too quiet. Because of Corona, Zoo Berlin lost many visitors.

In 2019, a record 3.7 million visitors showed up, or some 10,000 people per day. When the pandemic hit, the zoo was closed, at first. During the first wave the Senate shut it down for six weeks. The aquarium on the premises had to close for an even longer period. Later, both Zoo Berlin and the Tierpark, which is former East Berlin’s zoo, were allowed to remain open, in spite of high Corona infection numbers. In 2020, the visitor numbers shrunk by 40 percent to 2.27 million. The 2021 numbers are not available yet, but they will be low too. Welcoming less visitors means generating less income, which is why the not-for-profit public company which runs Berlin’s zoos got Corona aid money. It was badly needed and still is.

On a Thursday in mid-January, many animals were not seen. The elephants were indoors most of the time since their ears tend to freeze in the cold. The same applied to countless other species. But Zoo Berlin’s superstars were very active, as always. Meng Xiang and Meng Yuan, two adorable pandas, were born right here in September of 2019, only a few months before Corona hit. They were supposed to attract even more visitors, but the pandemic screwed it all up.

Berlin might be a very international city. But, apparently, the names Meng Xiang and Meng Yuan were too international, which is why the two cuties got German names as well. As long as they still are on German soil, they are known as Pit and Paule. But the little ones will be moving to China, the country their parents Jiao Qing and Meng Meng were born in. A spokeslady for Zoo Berlin told The Berlin Spectator it would probably happen in spring or summer. Jiao Qing and Meng Meng, the parents, are supposed to stay in the German capital. Their kids, on the other hand, will soon be trained for the one-way flight they will have to take.

When Meng Xiang and Meng Yuan leave, other animals will be moving in. Because of Corona, the completion of the zoo’s new feline predator’s world was delayed by two years. If the virus does not mess up this inauguration too, it will take place in spring. One tiger already lives in the one enclosure that was already opened. Yesterday, it hid in a cave because of the cold wind. A few steps away, workers were dealing with wooden coverings for cages. Three baby lions do live at Zoo Berlin already, but only their caretakers see them at this point. Soon, a leopard and slightly smaller cats will be delivered.

Speaking of cats: Zoo Berlin has several domestic ones too. Their task is to keep intruders of their kind out of the zoo. Of course, they are also making sure the number of mice does not increase too much. Cats, big or small, need some warmth. That is why some of the caves in the feline predator’s world will actually be heated. During the construction, old heating pipes were found. This means that at least some former enclosures for lions and tigers were probably heated some 100 to 150 years ago. Zoo Berlin was founded on August 1st, 1844.

There is a second construction site. Recently, the enclosures for great one-horned rhinoceroses, warty pigs and tapirs had to be demolished because they were falling apart. They are being rebuilt from scratch right now. The rhinos will be living in a separate Indian style enclosure that will include a wooden pagoda. Yes, both construction projects do cost money, funds that are not coming in right now.

On a cold Thursday in early 2022, action was going on in the monkey house. Some apes looked rather sad and bored. Others, including the toque macaque apes from Sri Lanka, climbed, jumped and argued like crazy. A big gorilla next door was busy picking its nose. In yet another cage, a mandrill slowly enjoyed a banana. This beautiful animal seemed to want to enjoy it to the fullest. The seals seemed to have far more fun than all other animals in the entire zoo. They constantly went for spins in their big pool. Around the corner from that location, one small penguin behaved like a seal in his own pool while his mates just stood there and watched.

At Zoo Berlin, Corona vaccinations are required. Persons who recently recovered from COVID-19 may enter as well. Everyone needs to wear masks, except for the seals.

Related feature: Zoo Berlin: Where Lions and Tigers are Not Being Fed (July 2019, republished in March of 2020)

The English version of Zoo Berlin’s website can be accessed here.