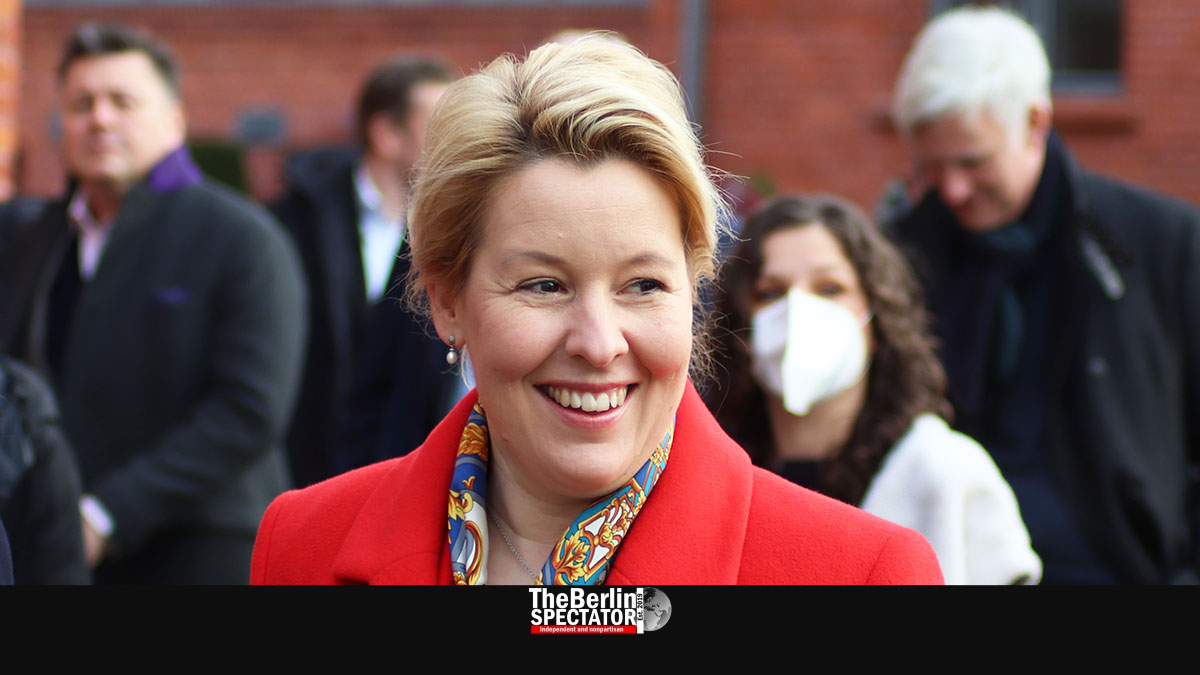 At a hotel in neighboring Brandenburg, Berlin’s new Governing Mayor Franziska Giffey and her Senators got together over the weekend. Their intention was to decide what they want to get done in the coming weeks.

Berlin, January 16th, 2022 (The Berlin Spectator) — Twenty-five days after she was elected Governing Mayor by the Berlin House of Representatives, Franziska Giffey arrived at a “bio hotel”, whatever that is supposed to be, located a few miles from the town of Nauen in Brandenburg province. So did her Senators and some state secretaries. Berlin can be loud and distracting. In Brandenburg province, the air is a lot better too. This little trip was about defining priorities for the first 100 days twenty-five of which have already passed.

Capital of the Future

Mrs. Giffey, a Social Democrat, is running a government coalition with the left-wing Greens and the far-left ‘Die Linke’, just like her predecessor. With them, and with her SPD colleagues, she came to some conclusions. Berlin is supposed to become more caring, safer and its economy is supposed to be strengthened. Furthermore, the city of cities will be more sustainable, more diverse, citizen-oriented and more digital. With its new 100-Day Program, the Senate wants to turn Berlin into a “capital of the future in which all residents benefit from improvements”.

Of course, this sounds wonderful, and it is supposed to. By March 31st, 2022, Franziska Giffey and her team intend to “implement milestones”. First of all, there is something called Corona, a mean virus that is hitting Berlin pretty hard as we speak. The fact that the fight against the pandemic, including Omicron, is one of the priorities the Senate identified, goes without saying. Several projects for the next 75 days are related to Corona.

A “post-Corona aid package” for cultural venues, projects and persons is among them. So is a “reboot program” for the economy that is supposed to kick in when the damned virus finally vanishes. A big health center for the Neukölln district is part of the ambitious plans too. On top of it all, a police station at Kottbusser Tor in Berlin’s Kreuzberg borough will be planned. This chaotic square is a crime hotspot.

The Senate’s to-do list is rather long. All departments and the State Chancellery have tasks they are supposed to work on. Franziska Giffey herself and her aides will be dealing with an “alliance for the construction of apartments and affordable living” and the foundation of a Senate Commission for the same purpose. The Governing Mayor will talk to Berlin’s friends in neighboring Brandenburg and take everyone to a sitting of both state governments in order to discuss the ongoing cooperation. Mrs. Giffey also intends to improve the cooperation between Red City Hall and Berlin’s twelve District Mayors.

Bettina Jarasch, the green Environment Senator, will be working on the climate goals Berlin intends to reach. She wants to accelerate the construction of proper bike lanes, plan new bus lanes all over the place and find a new location for the consumer advice center in the eastern part of the city. Is this all? No. An improvement of other parts of Berlin’s traffic infrastructure, including the many bridges (read separate feature ‘Berlin: Capital of Bad Bridges‘), is yet another task.

In the next 75 days, Culture Senator Klaus Lederer of ‘Die Linke’ will not be bored either. He will be working on those aid programs for the city’s culture and a ‘Cultural Summer 2022’, a festival with free cultural events all over the city. The other Senators are busy as hell too.