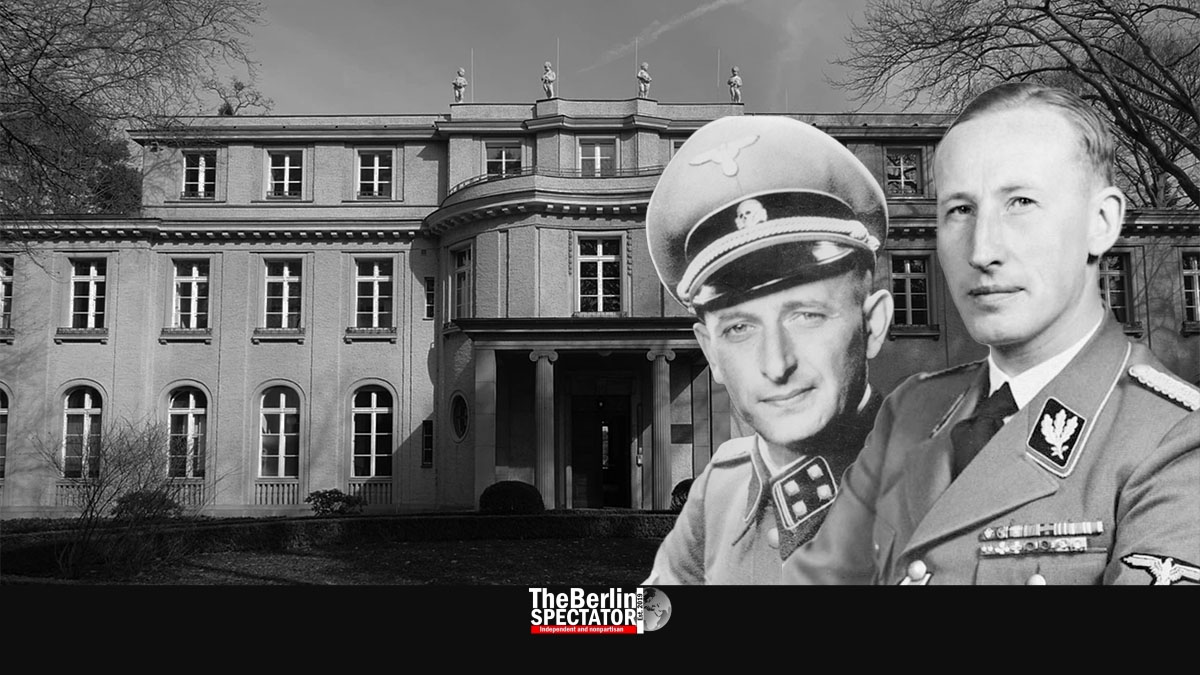 On January 20th, 1942, some of Hitler’s henchmen gathered in a villa at the Wannsee, one of Berlin’s lakes. Reinhard Heydrich, the head of the Reich Security Main Office, SS-‘Obersturmbannführer’ Adolf Eichmann and thirteen more Nazi officials discussed the deportation and murder of Europe’s Jews while they were enjoying drinks.

Berlin, January 16th, 2022 (The Berlin Spectator) — The Wannsee Conference was a gathering of fifteen high-ranking Nazi officials who outdid each other with ideas on how to optimize the mass murder. When the 85-minute meeting took place exactly 80 years ago, the Holocaust was already going on. In Berlin, Reinhard Heydrich and the other participants organized the deportation of all European Jews towards the east, in order to exterminate them in death camps. Half a year before this encounter of murderers, Hermann Göring, one of the most powerful figures in Nazi Germany, ordered Heydrich to organize what he called “the final solution of the Jewish question”. The man who kept the minutes during the meeting was Adolf Eichmann, Heydrich’s ‘aide for Jewish matters’ who is known as the ‘architect of the Holocaust’ today.

Several subjects were on the agenda. Heydrich wanted to make sure the responsibilities would be clarified. All measures for the implementation of the murder of an entire people were supposed to be defined and scheduled. Even back then, Germans were said to be good organizers. This definitely applied to Adolf Eichmann, one of the keenest mass murderers ever. Another task was the definition of Jews who would be deported and killed. According to historians, Heydrich was not sure whether all participants of the Wannsee Conference would support the “final solution”. As it turned out, all of them were not only supportive, but enthusiastic about the genocide campaign they were planning.

At the meeting, the SS-Obergruppenführer said 11 million Jews, including those from countries the Nazis had not occupied, needed to be deported. His aide Eichmann was prepared. He brought a list of 32 regions and countries with the number of Jews who lived there. The total number on the bottom of the page was 11 million. According to Eichmann’s minutes they were supposed to be forced to participate in road building activities during which there would be “a natural decline”. The “remainder” would need to be “treated accordingly”. The Nazis, and especially Adolf Eichmann, knew how to word their plans for the worst crimes ever committed in human history.

‘Half Jews’ and ‘Quarter Jews’

Reinhard Heydrich, Adolf Eichmann and the other participants consumed cognac during their Wannsee Conference. While they enjoyed their expensive drinks, they discussed how to proceed with “half Jews”. Only those who were married to partners “with German bloodlines” and had children were going to be spared, but sterilized. Persons the Nazis called “quarter Jews” because they had one Jewish grandparent were not supposed to be deported either, unless they “conspicuously looked Jewish”, according to the Nazis’ sick race theories. After 85 minutes, the Wannsee Conference was over. Eichmann’s minutes are an important historical document which proves Nazi Germany’s intent to murder all European Jews. It succeeded in six million cases. Tens of thousands of people of Romani origin and members of other minorities were murdered as well.

Reinhard Heydrich died four months after heading the Wannsee Conference. He was targeted and attacked by two Czech nationals who had been sent by Czechia’s exiled government. Adolf Eichmann, on the other hand, lived for another 20 years. He managed to flee to Argentina after the war, where he was captured by the Israeli Mossad in 1960 and flown to Jerusalem. He was tried there. In 1962, the ‘architect of the Holocaust’ became the first and only person Israel ever executed. Later, it turned out West Germany’s government knew about his whereabouts early on, but refrained from apprehending him because it feared the Federal Republic’s image would suffer otherwise.

Today, eighty years later, the Wannsee Conference is the subject of a new film that will be screened at the ‘Zoo Palast’ cinema in Berlin on Tuesday. President Frank-Walter Steinmeier was scheduled to be there and hold a speech beforehand. The film will also be shown on ZDF television on January 24th, 2022 at 8:15 p.m. CET. On Tuesday, Steinmeier will also visit the exhibition ‘The Meeting at Wannsee and the Murder of the European Jews’ at the ‘House of the Wannsee Conference‘, a memorial site at the villa at the lake.