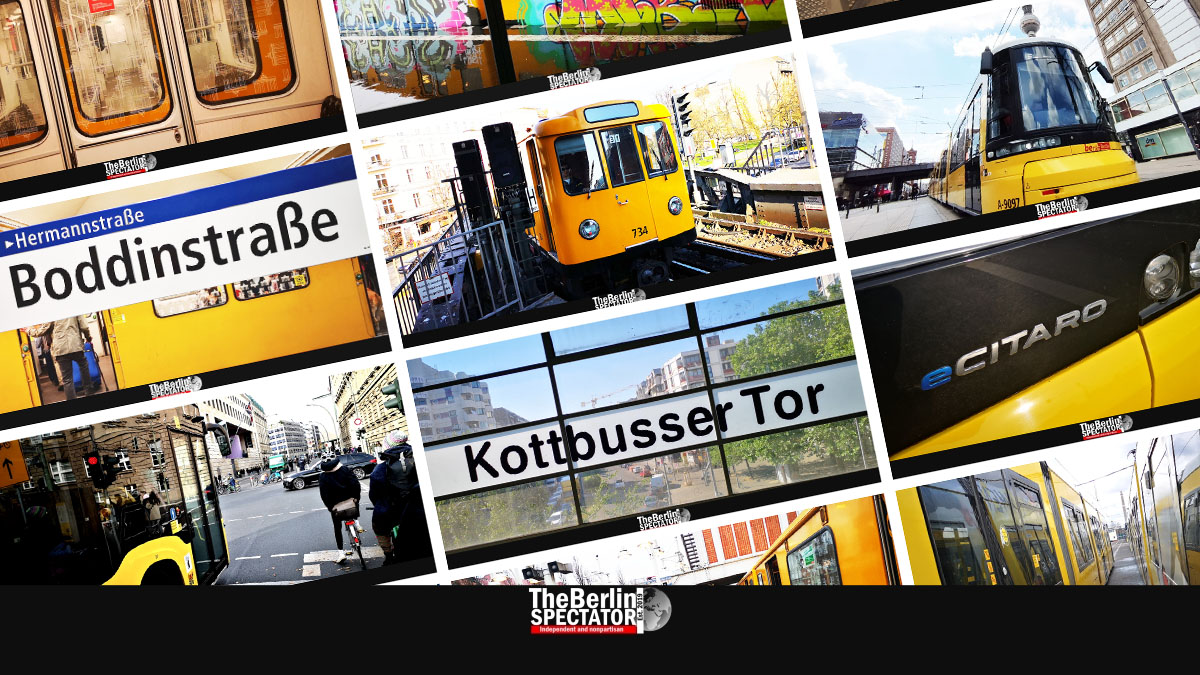 Millions of Berliners rely on their city’s main public transport provider BVG every day. Like them, the state-owned company is affected by the ongoing Omicron wave. Now, passengers will have to wait a little longer. But their travel time is supposed to decrease soon, thanks to new bus lanes.

Berlin, January 21st, 2022 (The Berlin Spectator) — Berlin’s BVG is known for its yellow buses, trams and ‘U-Bahnen’ (metro, subway, underground, tube, plural form), for its delays in its partially chaotic city and for its funny ads. In most cases, the latter are based on word games that do not work in English. The BVG is Berlin, and Berlin is the BVG. The BVG is everywhere in the city. There is no escaping it.

The state-owned company runs almost 1,500 buses which move back and forth on 152 lines with as many as 6,452 stops. More than 350 tramcars are on the move as well. At 173 ‘U-Bahn’ stations and 803 tram stops, passengers are always waiting to be picked up. Before Corona, the BVG transported 3.5 million passengers per day, almost as many as there are residents in Berlin.

Running an endeavor like the BVG is never easy, and there are always issues to resolve. For instance, the ‘U-Bahn’ fleet needs to be modernized, the bus fleet is being electrified, which is easier said than done, while the train tracks, tunnels, signals and bridges need to be renovated all the time. The pandemic makes things even more complicated. Because of the spread of the latest Corona mutation known as Omicron, more and more drivers are calling in sick. Many are either infected or in quarantine because they were in contact with infected people.

That is why the BVG had to thin out the frequency of some bus lines. The company says 95 percent of all rides were not affected, which means that 5 percent are. Changes are being felt on 21 bus lines. But, “Berlin can rely on the BVG”, Rolf Erfurt, a board member in the operations department, says. He is right. Still, Corona does affect the ‘U-Bahn’ frequency too. Starting on Monday, passengers will have to wait for their subway trains a little longer. On the lines U2, U5, U6 and U9, they will depart their stations every 5 minutes during the day, instead of every 4.

Two of a total of 22 tram lines are affected as well. Starting on Monday, the intervals between trams on the lines M5 and M6 will be 10 minutes. According to the BVG, all changes were reconciled with Berlin’s Senate Administration of Mobility. The schedules on the company’s website and those in its app were updated. It is unclear when the schedules can return to normality. This obviously depends on Omicron.

In the meantime, the Berlin Senate is working on speeding up some of the BVG’s bus lines by looking into a quick installation of more bus lanes. Red City Hall just offered the city’s twelve districts an intensified cooperation. The Senate Administration wants to take things into its own hands in order to make sure previously planned bus lanes will actually be installed.

Bus lanes are only part of the plans Governing Mayor Franziska Giffey and her people have. They also intend to accelerate their “mobility turnaround”. This is not about making buses or trams move upside down, but rather a plan that is supposed to make public transport more attractive and encourage Berliners to take the bus, the tram or the ‘U-Bahn’ instead of going to work, to school or to the hairdresser by car.

Public transport in Berlin is supposed to become faster, bigger and cleaner. On Wednesday, Mrs. Giffey and Mobility Senator Bettina Jarasch visited one of the BVG’s bus depots. In order to make the ‘mobility turnaround’ work, the changeover to environment-friendly vehicles needed to be facilitated, the Governing Mayor said. She also stated the extension of the U7 line to BER Airport in Schönefeld was a priority.