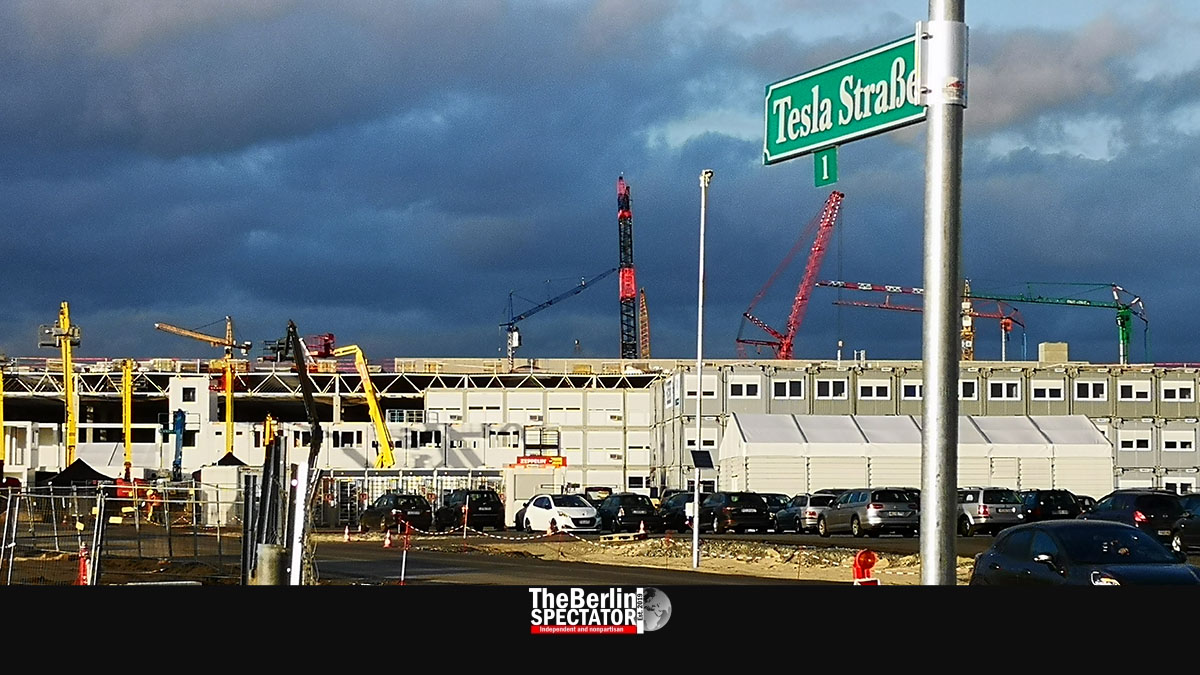 So far, Tesla’s ‘Gigafactory’ in Brandenburg does not have the final permission it needs to start manufacturing vehicles. Still, dozens of Model Ys are leaving the factory. The American company seems to be fine-tuning its assembly line.

Berlin, January 25th, 2022 (The Berlin Spectator) — There was a time when everyone wanted German-made cars because they were the most reliable, the most elegant and the technically most advanced vehicles available on the planet. On top of it all, they served as status symbols. Innovation was something the engineers at Audi, BMW, Mercedes and Volkswagen worked on all the time, by inventing all kinds of safety systems and extras which made those vehicles even more comfortable. But they somehow forgot to get away from the combustion engine.

German auto makers had many reasons to develop arrogance and to deride their American competition. Over there, on the opposite side of the Atlantic Ocean, they were basically building bathtubs on wheels. Nobody expected an American company to revolutionize mobility. Now, the Americans will be producing electric vehicles in Brandenburg. Tesla’s idea to use the ‘Made in Germany’ label is probably a good idea. So is merging American innovation with German engineering and producing vehicles for the European market on that same continent.

At Freienbrink industrial park, the production of Tesla Model Ys is about to commence. It might happen in mid-February, when Elon Musk is scheduled to be in Berlin and Brandenburg province again. But, even before Tesla even got the official permission to manufacture cars in Germany, the pre-production seems to be in full swing. According to insideevs.com, some 160 Model Ys are parked on the factory’s premises. According to their report, more pre-production cars from Freienbrink are being tested in Norway.

Drone videos shot by Tobias Lindh seem to be proof for some of those claims. Indeed, the latest one shows dozens of mostly black Model Ys parked in a big construction mess, behind giant concrete pipes, over there in Brandenburg. These cars did not just fall out of the sky, meaning they were ‘Made in Germany’, right there at the Freienbrink ‘Gigafactory’.

The Americans were quick, in spite of the infamous German bureaucracy which causes a lot of headaches. In February of 2020, the Brandenburg project commenced in sync with the Corona pandemic. First, Tesla needed to get rid of a tree plantation. A court stopped the felling twice. Then, the construction of the factory commenced in fast motion. Elon Musk was not going to waste time. The first “Berlin Model Ys” were supposed to be manufactured in the summer of 2021, but it was not meant to happen. The following formula explains it: Bureaucracy + Corona = Delay.

From the Elise to Model 3

Very soon, the final permission is supposed to be granted. The beginning of production is going to be another milestone in Tesla’s incredible history. The madman who used to convert Lotus Elise roadsters into electric vehicles now sells more Model 3s than anyone would have imagined only a few years ago. In the fall of last year, this popular Tesla vehicle came close to the Volkswagen Golf, in regard to the sales numbers in Germany.

Germany: Scholz and Governors Agree to ‘Stay the Course’ in Regard to Corona Rules