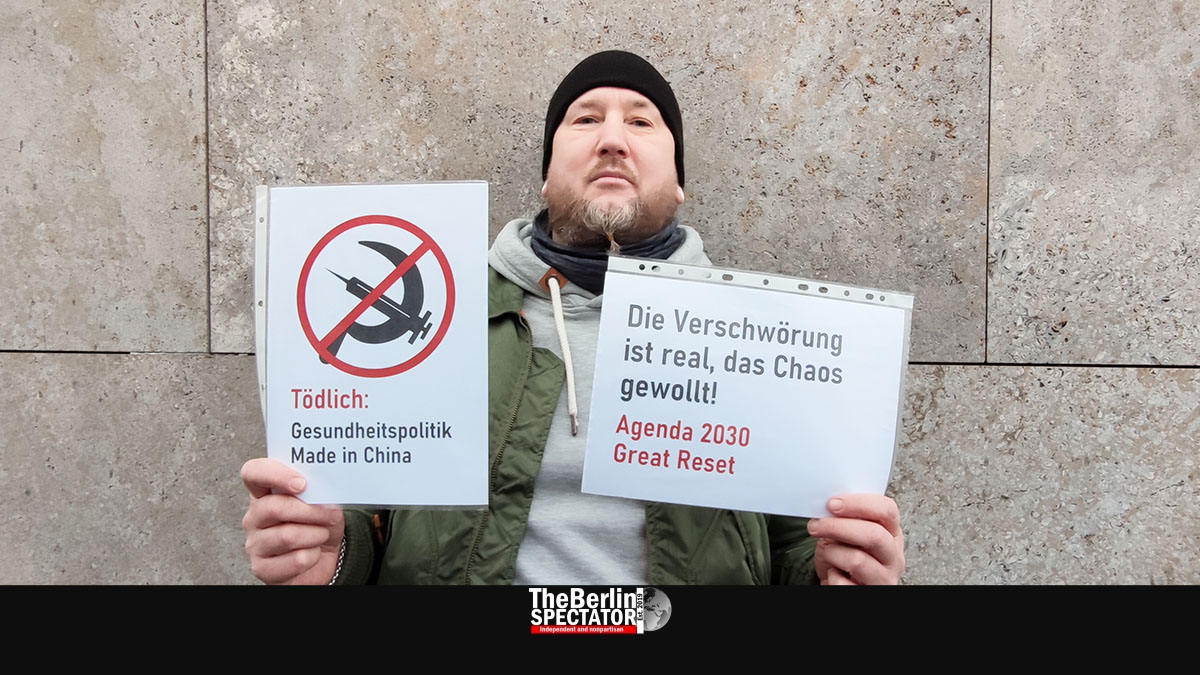 In Berlin, Corona deniers and anti-vaxxers appeared close to the government quarter on Wednesday. The police were prepared. In the early afternoon, they had the situation under control. An arrest was made.

Berlin, January 26th, 2022 (The Berlin Spectator) — Berlin’s Marshall Bridge was named after the late U.S. Army General George C. Marshall who initiated the Marshall Plan for Western Europe after World War II. It crosses the Spree river in Berlin’s Mitte district, which is Germany’s Corona hotspot right now, with a Seven Day Incidence of 3,109.6 (no typo). The Reichstag, the building which houses to Berlin Bundestag, is in sight distance. Today, its members started discussing mandatory Corona vaccinations.

Just before the parliament convened, in the early afternoon, the Marshall Bridge and the intersection on its southern side became pretty crowded. Yet again, conspiracy theorists and anti-vaxxers appeared. As always, many of them refrained from wearing masks and keeping their distance even though the police told them to, through loudspeakers mounted on top of a vehicle. For about an hour, officers walked around in order to tell people to follow the rules, face to face. It did not help much, because the minute the cops looked the other way, those masks were taken down again.

The situation on the other side of the bridge was similar. Here, a protest motorcade was supposed to get going. Shortly before 1:00 p.m., two policemen threatened to arrest a participant who would not adhere to their orders either. A bit later, when more and more protesters arrived on the southern side, the Berlin Police Department tightened the rules. They announced the maximum number of protesters at the location had been set to 50. Dozens of people who wanted to participate in the demonstration were turned back towards the Friedrichstrasse train station.

A total of 1,600 police officers were on duty in Berlin today. One of their main tasks was to protect the MPs at the Bundestag. Another one was to keep the protesters at bay. That is exactly what they did when a woman with a megaphone actually compared the situation of Jews in Nazi Germany to that of Germans the government wants to protect by implementing a mandatory vaccination law. It is not the first time this kind of disgusting comparison was voiced at protests of this case. But, this time, the police reacted quickly. In the middle of the woman’s scandalous speech, they arrested her and took her away.

More police officers observed the events unfold from a helicopter which stayed at the same spot, a few thousand feet above the city, for a long time. Hundreds of policemen and policewomen had cordoned off the entire government quarter in the morning. They made sure nobody had the opportunity to come close to the Reichstag or the Chancellery without permission.

After a while, hardly any protesters were left at Marshall Bridge. Instead, they suddenly appeared at Unter den Linden, the famous boulevard that connects Brandenburg Gate to Berlin Cathedral and Berlin Palace. Police officers stopped their rally before the dozens of participants could reach the important intersection with Friedrichstrasse. But there were still hours to go until the end of another crazy day. The game of cat-and-mouse was going to repeat itself over and over, on a rainy Wednesday afternoon in Berlin.