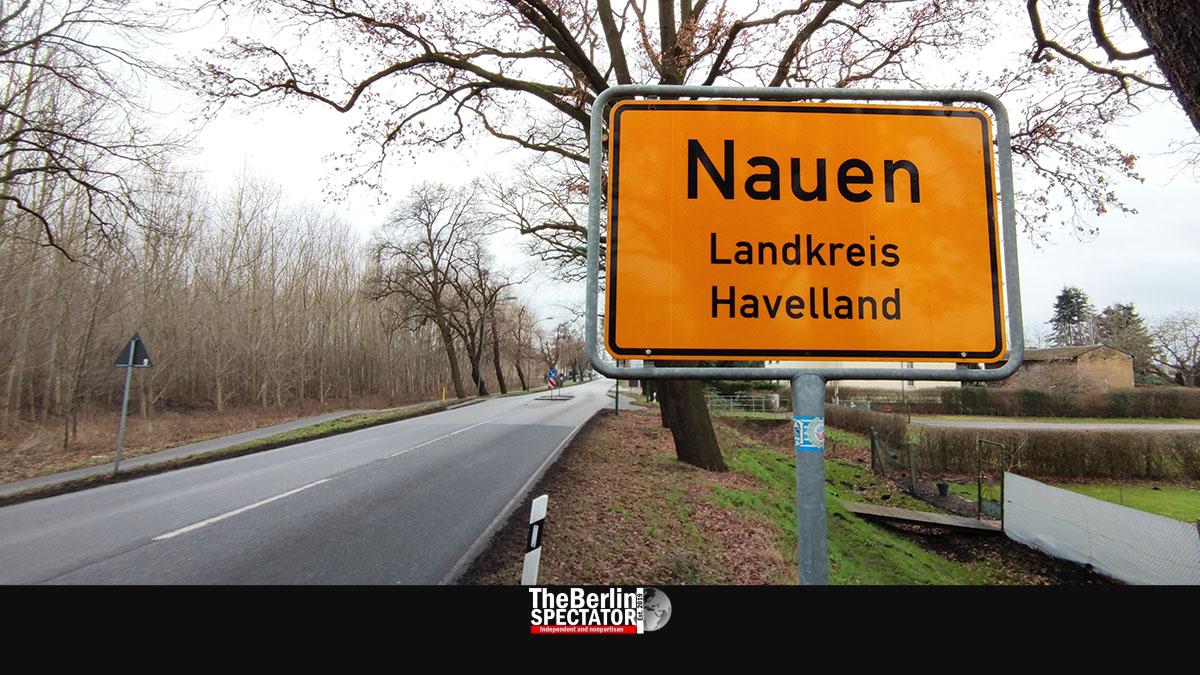 Located 25 miles from Berlin’s central station, the Brandenburgian town of Nauen might be a good place to live in, for people who like quietude and good air. But, as a tourist destination, it should probably be skipped.

Berlin, January 29th, 2022 (The Berlin Spectator) — Brandenburg has some of the most beautiful spots in Germany. Those include Dahme Spreewald county, where people kiss their ostriches goodnight. Let’s not even mention nice little towns such as Brandenburg an der Havel, or Potsdam, the capital. Nauen should probably be part of the list of Brandenburg’s more scary locations, along with Oranienburg, the most radioactive place in the province, the spooky Beelitz sanatoriums and BER Airport in Schönefeld.

Contemporaries who insist on visiting Nauen anyway should either take the train or head west on Federal Highways 2 and 5. After 25 miles (40 kilometers), they will reach their destination. If the town’s dull train station is the first impression visitors have, they should not expect a lot more for the excursion that will follow. Throughout GDR times, Nauen had about eleven and a half thousand residents. After Germany’s reunification, the number of inhabitants shrank by 1,000, probably because younger citizens moved to places that offered more opportunities. Starting in 2003, Nauen grew rapidly. Today, there are 18,500 inhabitants.

What do they do all day long? On a Saturday afternoon in January of 2022, this place seems dead. Hardly anyone is on the street. This applies to the partially sort of nice alleys in what the municipality calls the “historic center”, and to Dammstrasse, a main street that connects the town center to the nail care salon, the ‘dm’ drugstore, the ‘Rewe’ supermarket, the Vietnamese restaurant and the train station. Here and there, some teenagers are spending their time chatting and smoking. A father is pushing a child in a stroller, and two individuals, the ones with the best idea, are waiting for the train to Berlin which leaves eight minutes past the hour, every hour.

During a tour that leads the visitor to some of the places listed as sightseeing spots on Nauen’s official website, the excitement is being kept within reasonable limits. City Hall might have been built in 1891, but because it was renovated well, with northern-German red bricks, it does not look that old or historic even though it is. Across the street, the ‘Theater of Friendship’ has not attracted friends in a long time. Its old sign in GDR design and its boarded up windows make it a relic of a past in which everyone was equal, except those who were more equal.

Another main sightseeing spot, the ‘Richart-Hof’, a former farm the town purchased in order to turn it into a cultural venue with a little museum, is closed on this chilly day, probably thanks to Omicron. Secretly, the visitor is glad he cannot enter this exhilarating spot, but he will not admit it. Looking at the two churches from a distance is good enough. The same applies to the former water tower the top of which has become Nauen’s highest apartment.

Some 835 years ago, in the 12th century, Nauen was mentioned in an official document, which makes it rather old. In 1292, it finally got its town privilege. Then, in the past few centuries, Nauen was partially destroyed in wars several times. When the Nazis came to power, local labor leaders were persecuted. One of them was beaten to death, and an outpost of Oranienburg’s concentration camp was set up. The local synagogue was destroyed during the Night of Broken Glass.

During the Cold War, Nauen had to endure a lot of traffic because the transit route from Hamburg to West Berlin ran right through it until the Autobahn was finally built. The communist GDR did not really care about the town’s historic buildings. Today, the decay is still noticeable. Private owners seem to have renovated some of the beautiful old houses that survived the Allies’ bombing on April 20th, 1945, during which 83 citizens died.

In 1989, Naueners were part of the peaceful revolution that led to the fall of the Berlin Wall and Germany’s reunification. Thousands of them took part in protests against the regime in East Berlin. Twenty-six years later, in 2015, a refugee hostel which was being built for some of the hundreds of thousands of migrants who came to Germany that year was set on fire. As a result of this act of racism and hatred, a coalition of thirty organizations and Nauen’s municipality called for tolerance. They did not want their town to become a hotspot of right-wing radicalism.

Residents call Nauen ‘Funkstadt’. Unfortunately, the ‘Funk’ part has nothing to do with the music genre, but rather with radio engineering. A hundred years ago, pioneers in this field successfully installed the Nauen Transmitter Station, which was a sensation back then.

After one and a half hours, this visit to Nauen is over. It does feel good to be on the way back to this other eastern German town known as Berlin.