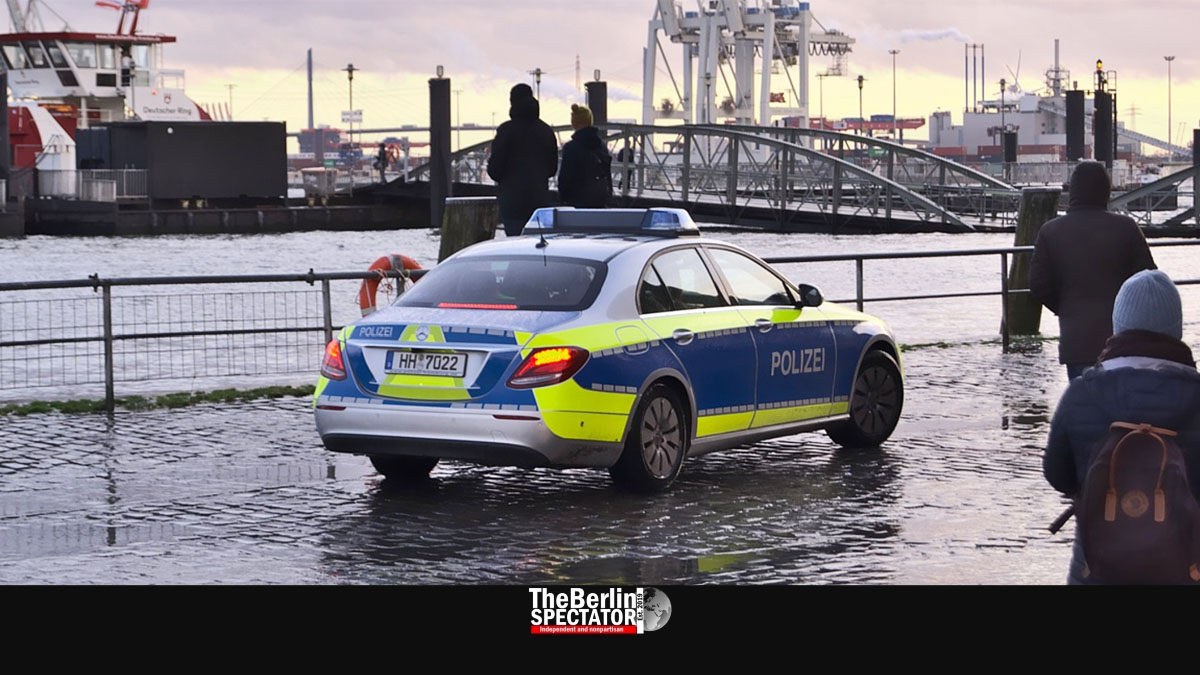 Especially in northern and northeastern Germany, a rather strong storm front battered cities, towns, villages and the countryside last night. In Hamburg, the authorities warned residents not to come close to the Elbe river. Deutsche Bahn reported problems too.

Berlin, January 30th, 2022. Update 10:55 a.m. CET (The Berlin Spectator) — Hamburg’s warning system for storm surges was just activated. A strong storm front that hit northern Germany on Saturday is pushing water up the Elbe river. Hamburg’s residents, especially older ones, know what this means. The city’s famous fish market already was flooded since the water in the Elbe was 5.2 meters (17 feet) above the sea level, and 2.8 meters (9.2 feet) above the usual high tide.

In cooperation with the Hamburg Police Department, the city’s ‘Storm Surge Warning Service’ (WADI) ordered residents to leave the port and all lower areas that could be affected. People were also asked to remove their vehicles from there before they disappear in the water. Hamburg’s elegant concert hall ‘Elbphilharmonie’ is located in the danger zone. Kolya Blacher’s concert might have to be cancelled or postponed.

The storm front ‘Nadia’ brought winds with speeds of up to 110 kilometers per hour (68 mph) to Hamburg. As a result, the fire department has been busy since yesterday. Its crews had to get rid of trees that had fallen on train tracks. Several ‘S-Bahn’ (city train) and ‘U-Bahn’ (metro, subway, tube, underground) lines were interrupted. The biggest problem was caused by a dredge which crashed into a bridge. As a result of the incident, train and road traffic had to be rerouted. On Sunday morning, a warning was issued for a potential second storm surge. Schleswig-Holstein and Mecklenburg-Hither Pomerania were affected as well.

Deutsche Bahn deported “influences caused by the weather”. Even in German, this sounds weird, but everyone knows what they meant. The storm system affected train connections between Hamburg and Berlin. Delays and cancellations were reported. More trouble was announced for routes between Hamburg and the North Sea coastline. Deutsche Bahn asked passengers to expect longer travel times and check their train connections ahead of time.

In Berlin and Brandenburg, the authorities asked people to stay at home as much as possible and warned them of the danger posed by falling trees or branches and objects the storm could catapult through the air. On Saturday, one tree fell on the train tracks used by the ‘S2’ line. The lines ‘S3’, ‘S9’ and ‘S25’ were affected too. Because of the storm, the Berlin Fire Department ordered several volunteer fire brigades to get ready.

On Sunday in the late morning, Berlin’s main public transport provider BVG sent out a statement according to which as many as 18 bus lines were affected by damage caused by the severe weather. Seven tram lines had to be interrupted temporarily because items were blown on their overhead wiring. ‘U-Bahn’ trains on overground stretches were ordered to decrease their speeds. The BVG’s F12 ferry was stopped this morning. After a temporary break, it will be back on the water.

In Berlin, ‘Nadia’, the storm front, was heard all night long. It made doors clatter and shook trees. In neighboring Brandenburg, the Uckermark region was affected most. On Sunday afternoon, the storm was supposed to recede, according to meteorologists.