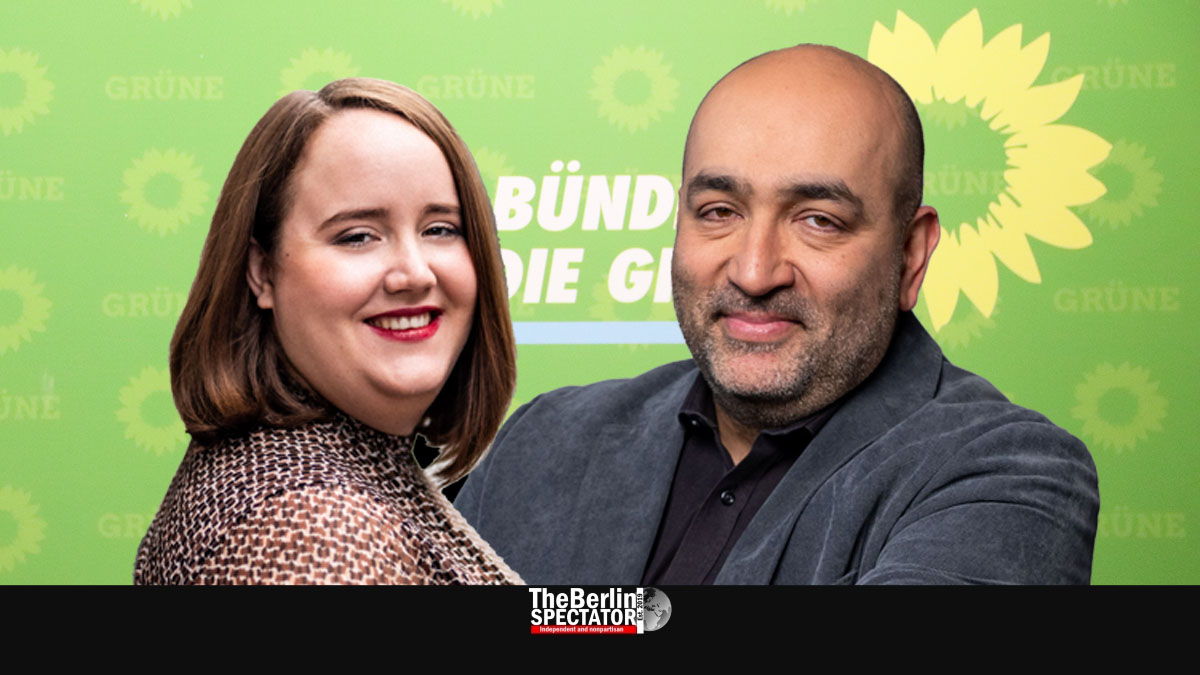 Ricarda Lang and Omid Nouripour are the new chairpersons of the German Greens. Both are interesting personalities. She is the youngest chairlady ever, and he was born in Teheran.

Berlin, January 31st, 2022 (The Berlin Spectator) — Ricarda Lang impresses her fellow Greens. She is only 28-year-old, but sounds a lot older. When the energetic young lady answers interview questions, she does so confidently, as if she had been in politics for many decades. If they had to become part of a book, her spontaneous statements would not have to be edited. This is how precise and well worded they are. Ricarda Lang is good at speaking standard German, but she cannot hide her Swabian origin completely, because the voiced “s” most Germans use gives her trouble.

As a left-winger in the Green party Ricarda Lang might have the inner urge to fight out conflicts in Germany’s new government coalition, which also includes the center-left Social Democrats and the center-right Free Democrats. One central demand of hers is the combination of climate protection and social justice. “There cannot be justice without climate protection”, she told the delegates at the Green party convention this past weekend.

Ricarda Lang had to deliver her speech via a video feed from the shared apartment she lives in because she tested positive for Corona just before the big event. Her physical absence did not keep 75.9 percent of the delegates to vote for her as one of two co-chairpersons who will lead the party in the coming years. The former leaders Annalena Baerbock and Robert Habeck vacated their positions because they have enough work as Ministers in Chancellor Olaf Scholz’ government.

For the new co-leader and her colleague Omid Nouripour, who got 82.6 percent of the votes, things will not be easy. Many in the party are unhappy with the Green’s election campaign last year, even though the party ended up with its best result ever back in September. Many believe the Greens had the potential to become the strongest party and to grab the chancellery. In the polls, there was a point at which the Greens actually overtook everyone else. But then, several mistakes made them lose a lot of support.

There is another problem: Some Greens believe Baerbock and Habeck let the SPD, and especially the FDP, steal their blind during the coalition talks, before the new government was formed. Especially the fact that the former party leaders dumped their demand for a speed limit on the Autobahn is something some Greens have still not digested. To their opinion, they should have gotten the Transport Ministry and enforced this measure they had called for since the Green party was founded in 1980.

Omid Nouripour is 46 years old. He was born in Teheran in 1975. When he was 13 years old, his parents, both of whom are aviation engineers, decided to move to Germany. In Frankfurt am Main, he finished high school in order to study law and political science. Just like Ricarda Lang, he dropped out of the university without diploma. As opposed to her, he is considered to be part of the party’s ‘realist wing’. In his first interviews as co-chairman, Nouripour demonstrated a lot of self-confidence.

He will need it. With Mrs. Lang, he will have to make sure the Greens look into what went wrong before the big elections, but do so without damaging the image of Foreign Minister Annalena Baerbock. They will also have to deal with the latest scandal: In 2020, the party board members granted themselves “Corona bonuses”. Of course, this revelation does not make the Greens look too good. The same applies to the fact that the prosecution started looking into the matter.