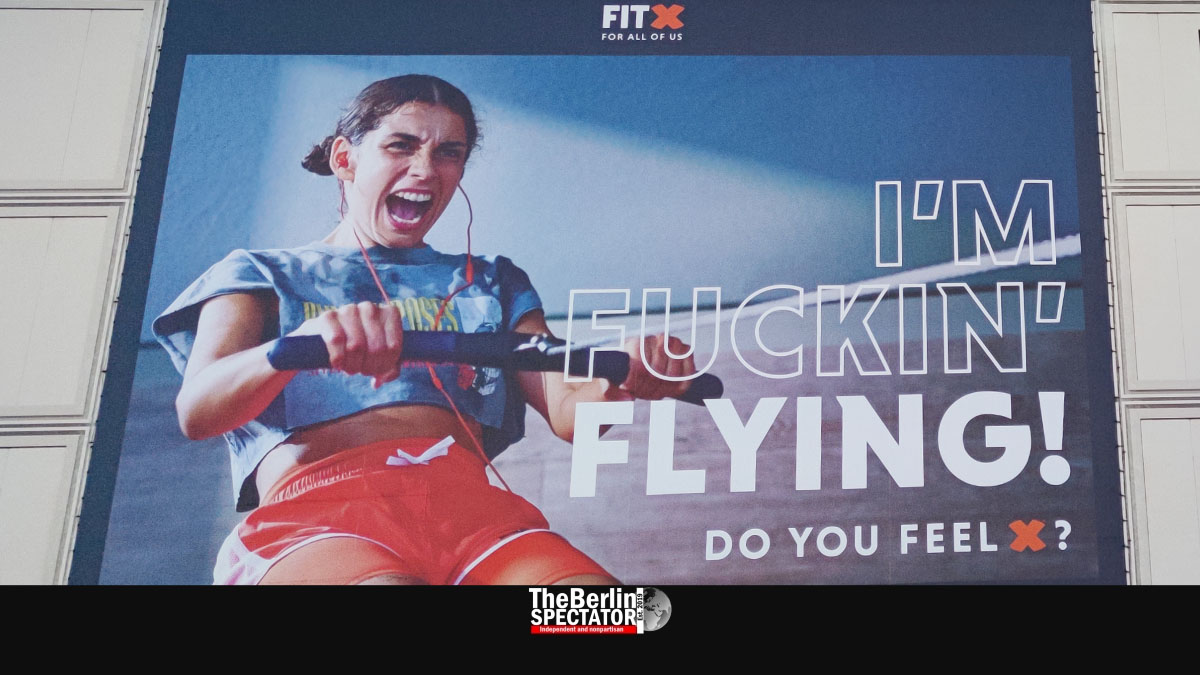 German businesses and authorities are desperately trying to attract attention by placing advertisements everywhere they can. Those who really want to stand out use ‘adult language’ in English. It seems to be working well.

Berlin, January 31st, 2022 (The Berlin Spectator) — In a German online ad for a vacuum cleaner robot, it says the product was “perfect for animal hair”. Who will remember this one? Hardly anyone. The next banner ad that pops up was made to sell SIM cards for cell phones. It says something about a big data volume. The slogan reads “Überall zu Hause” (“At home anywhere”). In this case, the artwork looks good. Still, it is a conventional ad. It might draw some interest, also because the offer is attractive, but most people will likely forget this ad within seconds, as they open the next website.

Every day, everyone is being drowned in advertisements all day long. They are being placed on big billboards in the city, printed in newspapers, they pop up on the Internet or appear in our post box. On top of all of this, radio spots and television ads constantly reach us. Since there is an advertising overkill, agencies or individuals who create those campaigns need to be very creative in order to make sure the message hits home. In the case of the German government’s new ad campaign for Corona vaccinations, it did not work too well. “Vaccinations help”, the first banners in the series say. How is this supposed to convince anyone? And how come this rather lame campaign reportedly costs 60 million Euro (66.9 million U.S. Dollars or 50 million Pounds Sterling)?

In former Chancellor Angela Merkel’s government, at least one high-ranking member, Transport Minister Andreas Scheuer, knew what he had to do. In early 2019, he ordered an advertising campaign for the use of bicycle helmets and insisted it needed to be memorable. The message was supposed to be the obvious: Helmets should be worn for safety reasons. What should the ads have said? “Don’t forget to put on your helmet when you ride your bike”? Yawn. Or how about “Just wear it”? This one would have been better, but not really memorable. The advertisements the German Ministry of Transport published read “Looks like shit. But saves my life”. Yes, in English.

The Germans seem to react to English advertising slogans. And they love their anglicisms, especially when they contain four-letter words. In 2012, the English word ‘shitstorm’ became ‘Anglicism of the year’. It is being used in Berlin’s government quarter and even in the TV evening news. No, the Germans will not use their own four-letter words in commercials or TV broadcasts, but English ones. In advertising, what the Americans call ‘adult language’ apparently works well. “Best fucking burger in town.” Who would not remember a self-made sign with this slogan? It was hung up by a restaurant owner, next to the entrance to his business in Berlin’s Graefekiez neighborhood two years ago.

Recently, FitX, a German gym chain with 95 branches all over the country, put up a new ad at Berlin’s Alexanderplatz, a square which basically is the center of the universe in the sense that absolutely everyone drives, rides or walks by all the time. This giant billboard ad shows a young lady who is training at a gym, looking very determined and sweating like hell. The slogan reads “I am fuckin’ flying!”. Yes, this is a memorable ad.

We live in the 2020s. Almost everybody swears. They do in movies, in ministries, at the college and everywhere else. Four-letter words are widely accepted. So, why not make use of them? One interesting question, a less rhetorical one, has not been answered: Why do the Germans use English four-letter words in their ads, instead of their own? Maybe because they do not sound quite as vulgar, at least to Germans?

Apart from standing out, ads that contain words that were considered bad in the last century have another advantage: They are being mentioned in articles like this one. That way, they will reach far more people than they would have if they had been boring.