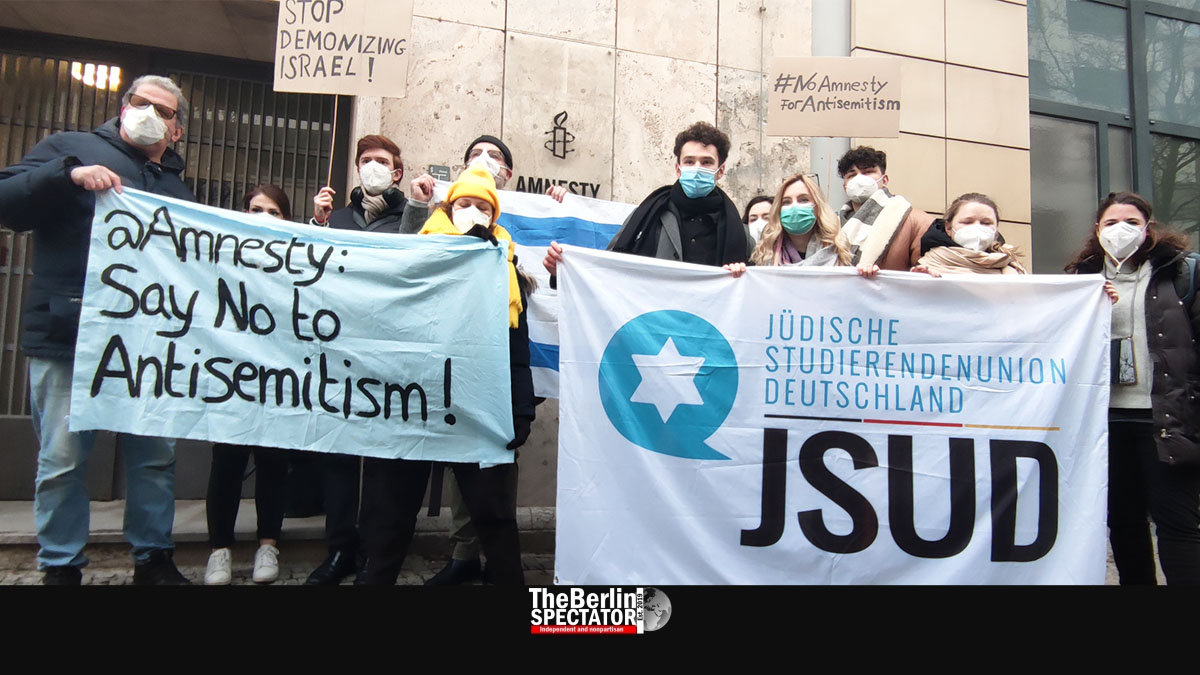 In front of Amnesty International’s office in Berlin, members of the Jewish Student’s Union staged a protest on Tuesday. The group wants the human rights organization’s German division to distance itself from the latest anti-Israeli report its U.K. division released.

Berlin, February 1st, 2022. Update: 2:06 p.m. CET (The Berlin Spectator) — Jewish organizations in Germany are furious about Amnesty International’s (A.I.) latest report on Israel. In it, A.I. accuses the only Jewish state in the world of Apartheid, which was “a cruel system of domination and a crime against humanity”.

“Our report reveals the true extent of Israel’s Apartheid regime. Whether they live in Gaza, East Jerusalem and the rest of the West Bank, or Israel itself, Palestinians are treated as an inferior racial group and systematically deprived of their rights.” This is what Amnesty International’s Secretary General Agnès Callamard actually said. “We found that Israel’s cruel policies of segregation, dispossession and exclusion across all territories under its control clearly amount to Apartheid. The international community has an obligation to act.”

The Central Council of Jews in Germany condemned the report. Josef Schuster, the Council’s President, said releasing a report of this kind was negligent because it would fuel antisemitism based on anti-Israel bias, which was already widely spread in Europe. In Germany, Jewish schoolkids were confronted with hostilities in many cases, Schuster stated. A.I. in Germany needed “to take responsibility and distance itself from the antisemitic report”.

According to the International Holocaust Remembrance Alliance’s Working Definition of Antisemitism, which Germany and many other states have signed, claiming that the existence of Israel is a racist endeavor, which is what A.I. obviously did in its report, is antisemitism. The same applies to “applying double standards by requiring of it a behavior not expected or demanded of any other democratic nation”.

In front of Amnesty International’s HQ in Berlin, the Union of Jewish Students in Germany (JSUD) organized a quick rally and one bigger protest. In the morning, eleven students and other supporters appeared on site and held signs saying “Stop demonizing Israel” and “No Amnesty for antisemitism”.

JSUD’s President Anna Staroselski told The Berlin Spectator, it was “problematic to deny Israel its right to exist”, which was exactly what A.I.’s report was doing, while demonizing the state. Volker Beck, a Green politician who also took part in this morning’s rally, stated Amnesty International’s U.K. division had spread antisemitic propaganda for years. He said, the 200-page report onesidedly villainized Israel’s reaction to the Palestinian violence without actually addressing the latter. Also, the report was recasting the conflict between Israel and the Palestinians into a racial clash. What it said about Israeli laws was plain wrong as well.

Sigmount Königsberg, the Jewish Congregation’s Commissioner for the Fight Against Antisemitism, said if Israel would implement all demands A.I.’s report contained, the state would cease to exist. Amnesty International denied the Jewish people the right to self-determination, Königsberg stated. At 5:00 p.m., JSUD’s second protest in front of A.I.’s Berlin office was going to take place.

For the World Jewish Congress, its President Ronald Lauder commented on A.I.’s report. He said it highlighted, once again, the repeated bias Israel was targeted with as the only Jewish state. “By issuing this one-sided and blatantly politicized report which totally ignores both Palestinian acts of terrorism and Israel’s obligation to defend its citizens against such terrorism, Amnesty International UK is consciously participating in the ongoing insidious campaign to demonize the State of Israel.”

Amnesty International Germany told The Berlin Spectator it would not answer questions about the report at this time. The Berlin office released a text in German which contains the same accusations against Israel. In the last paragraph, it says Amnesty International Germany had a “special responsibility” because “the systematic annihilation of Jewish persons” had been planned and implemented in this country. Therefore, A.I. Germany was not planning any activities related to the report on Israel.

About 21 percent of Israel’s population are Arabs. They have the same rights, become commanders in the armed forces, judges, MPs and doctors. Besides, they are the only Arabs in the entire Middle East who have the right to take part in free, democratic elections. In the past decades, Israel has tried to reach a peace accord with the Arabs who started calling themselves Palestinians in the 1960s, but they rejected all proposals, even though those deals would have given them their own state. At the same time, Israel has been pulled into numerous wars it did not want.

Germany: Will the Corona Restrictions be Eased in March?