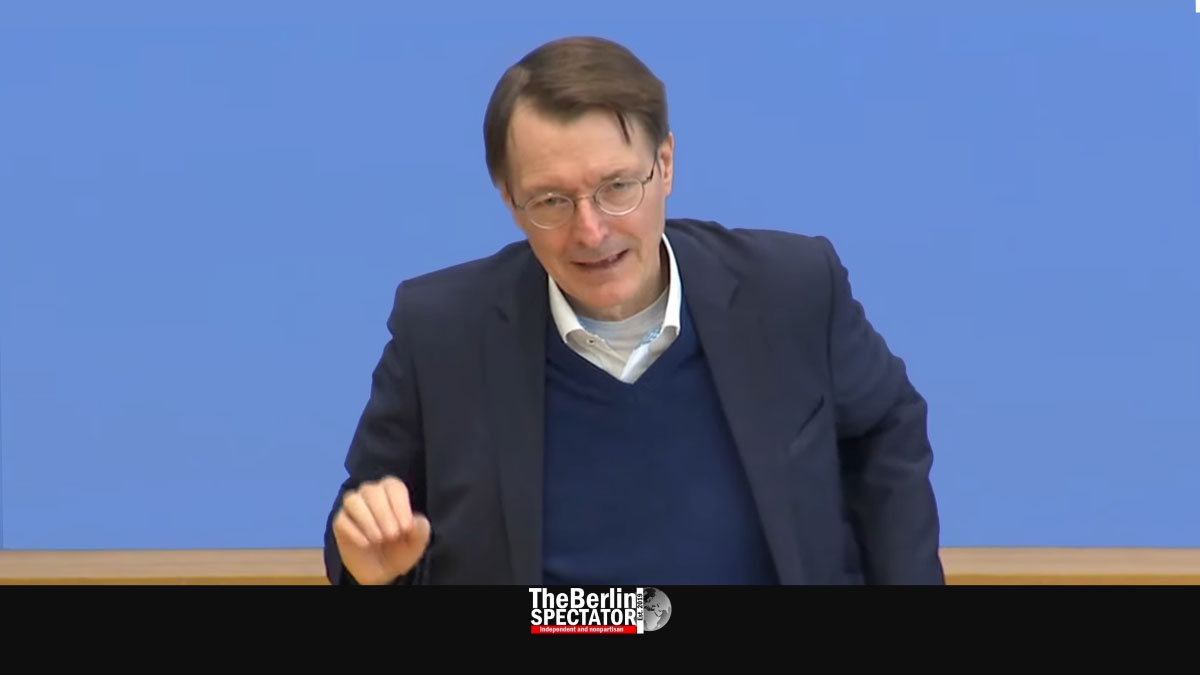 Health Minister Lauterbach firmly rejects opening steps at this moment. In a newspaper interview, he said what Germany had achieved in the course of weeks should not be ‘gambled away’.

Berlin, February 6th, 2022 (The Berlin Spectator) — On Sundays, the most interesting interviews with Berlin politicians usually appear in the ‘Bild am Sonntag’ weekly. Today is no exception. Professor Karl Lauterbach is Germany’s new Health Minister. From his perspective, the fact that neighboring Denmark just threw all Corona restrictions overboard, in spite of its extremely high Seven Day Incidence, is irrelevant.

Germany is in a different situation. For instance, it has far more unvaccinated citizens above 60 years of age and its vaccination rate is lower. For the Berlin government, just letting the Omicron wave infect everyone is not an option. “Our strategy has worked well, so far”, Lauterbach told ‘Bild am Sonntag’. “If we were to ease the restrictions too early, we would needlessly jeopardize our own success. Also, we would risk new, more dangerous infections and a prolongation of the wave.”

He said what the Federal Republic had achieved in the course of weeks should not be gambled away in a few days. He was referring to Germany’s infection numbers. At first glance, they look extremely high, because they are. But, in comparison, the country seems to be getting through the Omicron wave relatively well because it took measures early on. The contact restrictions and other rules Berlin put in place in December and January slowed down Corona to some extent. As a result, the German health system did not collapse.

The opinions expressed by representatives of the conservative opposition may sound different, but they are actually not so far away from what Lauterbach is saying. Bavaria’s First Minister Markus Söder told the same newspaper, Germany could “open a door in the Omicron wall” and possibly turn the pandemic into an endemic. “Once we can be sure the health system will not be overburdened, liberties should not stand behind, as they did in earlier phases of the pandemic”, the Governor stated.

The federal government is not denying that opening steps should be taken once the situation improves. But it still wants mandatory vaccinations of the kind the conservative-Green government coalition in neighboring Austria just put in place. Persons from 18 years of age are forced to get immunized against Corona, unless they are pregnant or suffer from certain pre-existing conditions. Starting in mid-March, those who do not adhere will have to pay hefty fines if caught.

In spite of the rising increasing infection numbers, some federal states in Germany are easing their Corona rules now. Even though Hesse’s First Minister Volker Bouffier was part of all Corona conferences with Chancellor Olaf Scholz, at which he agreed to the Corona rules that were supposed to apply in all of Germany, his government decided to get rid of the ‘2G rules’ in shops. This German abbreviation stands for ‘vaccinated or recovered’. But, starting tomorrow, anyone will have the right to enter any shop in the state of Hesse. Wearing FFP2 standard masks is mandatory though.

According to the Robert Koch Institute, 133,173 persons in Germany got infected with Corona in the past 24 hours, 14,000 more than last Sunday. The country’s Seven Day Incidence just reached yet another all-time high. It is now 1,400.8. Bavaria overtook Berlin. It just became Germany’s Corona hotspot yet again, with an Incidence of 1,756.0. The capital stands at 1,727.9. And Germany’s vaccination campaign is slowing down while the pandemic is not.

Berlin: Changes to the Corona Rules Apply from Today