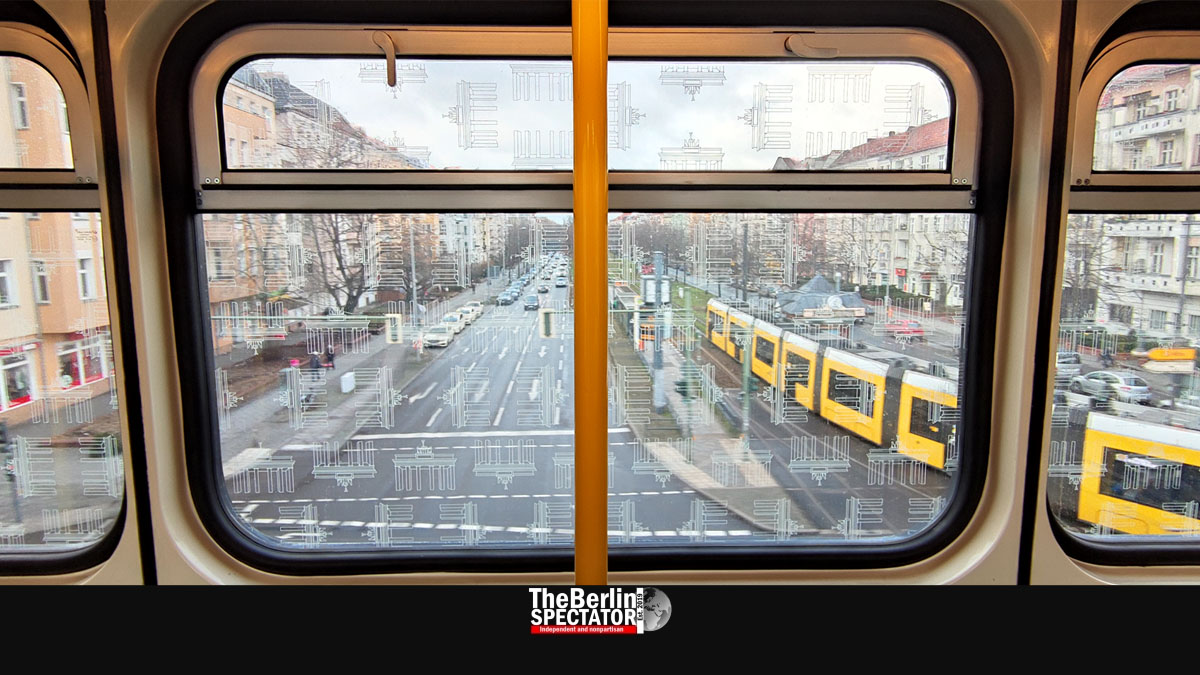 Tourists who come to Berlin want to see the city. On ‘U-Bahn’ trains, they notice the view out the windows is limited because they are covered with protective foils that feature countless copies of a sketch of Brandenburg Gate. This is supposed to change.

Berlin, February 7th, 2022 (The Berlin Spectator) — In pre-Corona times, more than a million tourists per month visited Berlin. They came from other parts of Germany, of Europe, of the world and probably of the universe. Some liked to party, others preferred to experience opera or theater performances. Quite a few insisted on eating Currywurst or doner kebab or both. But all tourists had one thing in common: They wanted to see Berlin.

The thousands of visitors who moved around in the city on ‘U-Bahn’ trains at any given moment noticed the view out the window was sort of limited. In most cases, they did not see a thing because those trains move back and forth in dark, rat-infested tunnels. But, on a few lines, the U1, U2 and U3, the trains use overhead tracks too, just like the Subway does in parts of Brooklyn/NY. They would provide good views and photo opportunities from up there if their windows were not covered with foils that feature thousands of copies of a sketch of Brandenburg Gate.

In the years to come, the Gate is supposed to disappear, according to the ‘Morgenpost’ daily, meaning the view will improve substantially. Berlin’s main public transport provider BVG ordered hundreds of new subway cars. The price tag is 3,1 billion Euro (3.55 billion U.S. Dollars or 2.62 billion Pounds Sterling). Deliveries are expected from late 2022 until 2032. On those new U-Bahn trains, Brandenburg Gate sketches will not obstruct people’s view. The application of completely transparent foils is planned.

With or without Brandenburg Gate, those foils have a purpose. They are supposed to keep idiots from scratching the windows, and from damaging them in other ways. Getting rid of damage, including graffiti, does cost a lot of money all the time. Foils on windows help the BVG prevent some of it. The ‘Morgenpost’ quoted a spokesperson who said the company wanted to try and see whether transparent foils would do the job.

There are even better news. This time, it is about the BVG’s buses. A total of 1,400 are part of the state-owned company’s fleet. They are being used on a total of 201 lines in Berlin. Of course, many of them get stuck in traffic all the time. A genius invention called bus lane is supposed to help here. “Public transport is attractive when it passes the congested car traffic”, the BVG’s CEO Eva Kreienkamp accurately stated.

The BVG already has 114 kilometers (71 miles) of bus lanes. Now, 11 kilometers (7 miles) are supposed to be added. Bus lanes are a science. The most efficient ones are reserved for buses only, meaning they cannot be used as bike lanes or parking spots for delivery trucks. But building those is complicated since they have to be in the middle of the street rather than next to the curb. In many cases, Berlin’s streets do not provide enough room for sidewalks, bike lanes, lanes for motorists and separate bus lanes.

In part, the billions of Euro required for those new ‘U-Bahnen’ (plural form), and the pocket change needed for bus lanes, are supposed to be covered by income generated by ticket sales. But, as it turns out, many Berliners and visitors refrain from purchasing them. In 2021, 6.9 million passengers were checked on ‘U-Bahn’ trains. Exactly 286,598 had to pay fines since they had not paid the fare.

From the 9.3 million passengers who were asked to show their tickets on buses, 302,000 did not have any. The fine is 60 Euro (69 Dollars or 51 Pounds). Fare dodgers who get caught three times have to expect criminal charges. Those who refuse to pay might end up in jail.