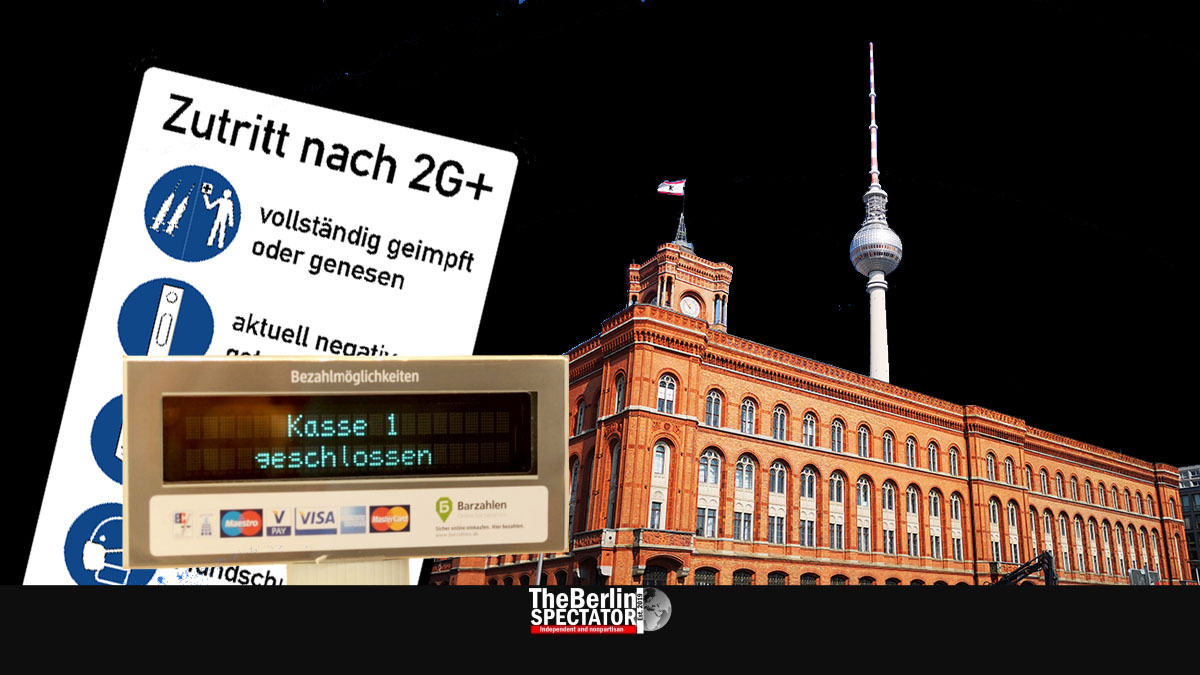 The federal states of Berlin and Brandenburg announced they would dump a Corona rule known as ‘2G’ which applies in shops. It keeps unvaccinated persons from entering non-essential retail businesses. Instead, they want to rely on masks.

Sofia/Bulgaria, February 8th, 2022. Update: 10:13 a.m. CET (The Berlin Spectator) — In the German-speaking world, ‘2G’ stands for “geimpft oder genesen”, vaccinated or recovered. ‘2G’ is what it says on signs at the entrances to most shops in Berlin and Brandenburg. At this stage, unvaccinated individuals may only enter supermarkets, pharmacies and drug stores. They are banned from going to any other kinds of shops. But this is supposed to change.

In Berlin, the Senate intends to take an official decision on the new approach next week. This means the easing of the Corona rules for shops will probably apply after February 18th, 2022. On Fridays, Berlin’s official bulletin is printed. Any new regulations need to be announced there, at least a day before they are actually being put in place. But, as soon as today, Governing Mayor Franziska Giffey and her Senators were going to discuss those changes.

The ongoing Omicron wave required an adjustment of regulations in many areas, Mrs. Giffey stated on Monday. In shops, everyone would have to wear FFP2 standard masks because they provided the best protection from Corona infections. According to the Governing Mayor, the new approach will help retail businesses and their employees. She was referring to the fact that they are forced to check everyone’s vaccination certificates as long as the ‘2G’ rule still applies.

Since the Corona pandemic reached Germany in early 2020, Berlin and Brandenburg have often put in place uniform rules, also because they did not want people to move back and forth between the two states more than necessary. In this case, Franziska Giffey and Brandenburg’s First Minister Dietmar Woidke want to take the same approach as well.

The announcement about an easing of the rules in shops was made in spite of the fact that a record number of Germans and residents of other nationalities are being infected right now. In the past 24 hours alone, 169,571 new cases were reported. Germany’s Seven Day Incidence just reached another all-time high. On Tuesday morning, it stood at 1,441.0.

The federal state with the highest infection numbers of them all, Bavaria, wants to suspend Germany’s mandatory vaccinations for caregivers even before the law was supposed to apply for the first time. Governor Markus Söder announced his state would “act most generously” in this regard. He stressed he wanted compulsory immunizations for everyone, but in the Omicron wave the partial rule which affected caregivers was not helpful. From March 15th, 2022, nurses, doctors, other hospital employees and caregivers are supposed to be required to prove they were vaccinated against Corona.

Germany’s Health Minister Karl Lauterbach is not exactly happy about Bavaria’s plans. The Bavarian state government needed to take the law seriously, he stated. This was about the protection of patients and nursing home residents. Lax rules could endanger people’s lives, Lauterbach added. And they damaged the credibility of politics.

Söder wants to make sure care facilities will still have the number of caretakers they need after March 15th. He fears there might not be enough employees left if unvaccinated persons are actually banned from doing their jobs. In spite of the extremely high infection numbers, he also wants to get rid of the curfew that applies in Bavaria’s food service industry. Right now, all restaurants and pubs have to close at 10:00 p.m..

In addition, the First Minister intends to give cultural venues the right to fill up to a maximum of 75 percent of their capacity. This morning, Bavaria’s Seven Day Incidence was 1,819.1. No other state is even close.

On Tuesday in the late morning, Karl Lauterbach said, this was not the right moment for easing Corona restrictions. The peak of the Omicron wave had not even been reached, and there were 100 to 150 Corona-related deaths every day. Lauterbach stated the discussion about lifting Corona rules that was going on in Germany right now startled him.