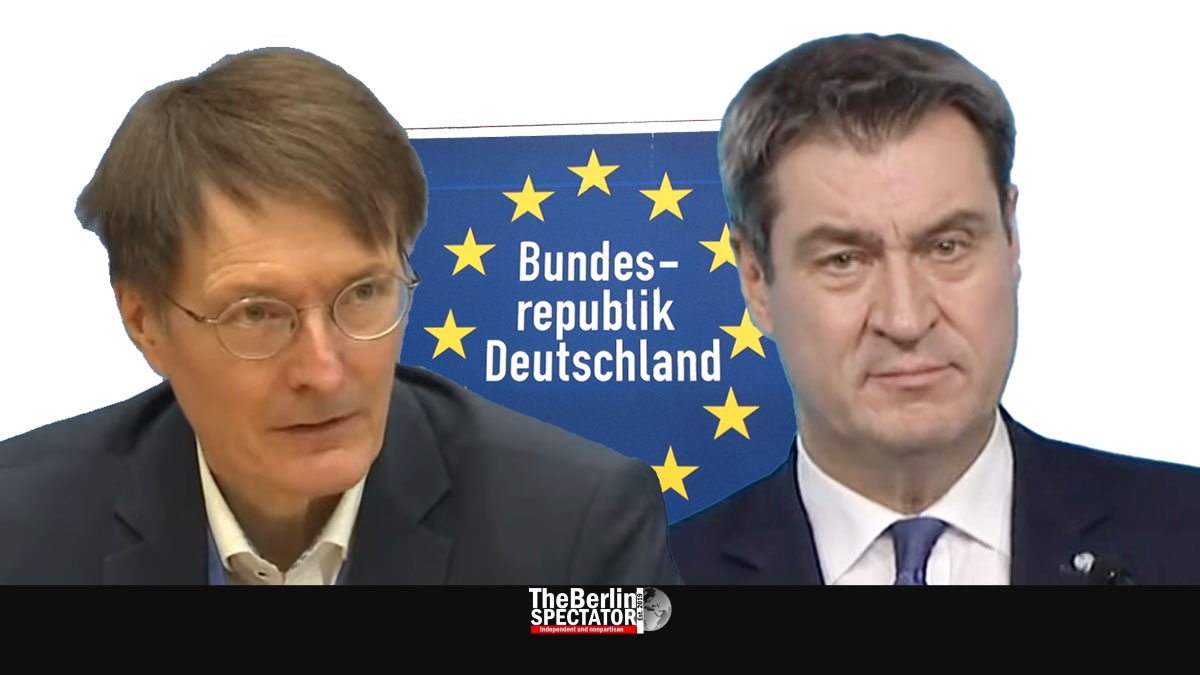 While the ongoing Corona wave is still causing extremely high infection numbers, a big argument has erupted between the conservative ‘union parties’ and Health Minister Lauterbach. Is this actually about Corona? Or is it about scoring off the Berlin government?

Sofia/Bulgaria, February 9th, 2022 (The Berlin Spectator) — Some eleven months ago, Chancellor Angela Merkel had a problem. Some Governors, or First Ministers, from Germany’s federal states insisted on showing how generous they were. So, they started arguing against Corona rules they themselves had agreed to shortly before. And they started throwing them overboard. Mrs. Merkel fought back by pushing a law through the Bundestag which forced them to play ball. This happened at a moment at which the Corona infection situation was dangerous.

Now, the next episode of this kind has commenced. If this was a Netflix series, it would have to be entitled ‘Insurrection Against Our Own Decisions’, starring Karl Lauterbach as Karl Lauterbach, Friedrich Merz as Friedrich Merz and Markus Söder as Markus Söder. Yes, there is a new federal government. Angela Merkel’s CDU has become an opposition party. Under its new chairman Merz, the conservatives seem to have noticed that Corona rules can be used to give Chancellor Scholz and his people a wipe.

On Monday, Bavaria’s First Minister Markus Söder, who heads the CDU’s conservative sister party CSU, had said his state would not implement the mandatory vaccination law that applies to nurses, doctors and caretakers because, otherwise, nursing homes and similar facilities would not have the manpower they needed. On Tuesday, Health Minister Karl Lauterbach slammed the Bavarian Governor. The Corona situation was not under control yet. It was wrong to jeopardize a successful strategy. Söder had set a dangerous signal by moving away from compulsory immunizations for caretakers. The Minister also mentioned the legal aspect in this. A First Minister could not just say a law would not be followed in his state.

Not so long ago, Söder was one of the first politicians who demanded a law of the kind he seems to be boycotting now. On Tuesday, it turned out he was not the only one who refused to play ball. The approach against decisions that were taken by Chancellor Olaf Scholz and all First Ministers, and against a binding law, was arranged within the ‘union parties’ CDU and CSU. All of a sudden, more of their Governors argued against those mandatory vaccinations in front of television cameras.

It gets more complicated. Those ‘union party’ representatives are not the only ones who want to drop Corona rules even before the Omicron wave has even reached its peak. A government party, the center-right FDP, wants to ease the restrictions. On top of it all, several federal states, including some that are being ruled by Scholz’ SPD, already announced they would lift the ‘2G rules’ in most shops. Soon, unvaccinated persons will be allowed to enter them again. This will be the case in Berlin and Brandenburg.

At the same time, the infection numbers are still alarming. The Robert Koch Institute reported 234,250 new cases today. The record of 248,838 new infections was reached on Friday. Today, the Seven Day Incidence is 1,450.8, the highest it has ever been. The good news is that it seems to be increasing at a lower pace and that the German health system has not been overburdened so far.

Minister Lauterbach wants to make sure this does not change. What his new foes actually want, especially those who were among the more cautious players when Mrs. Merkel was still in office and who have made 180-degree turns since, is not entirely clear. Is this really about Corona? The answer is a matter of interpretation.