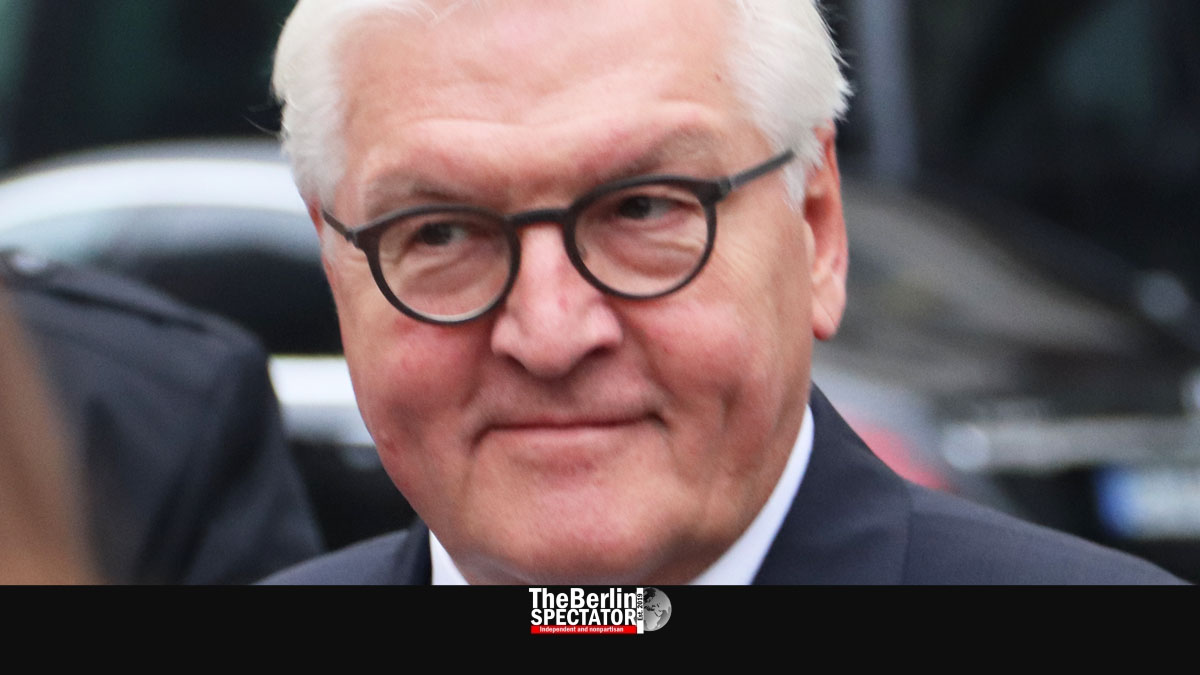 Interesting people are part of the Federal Assembly which will elect the next Federal President on Sunday. They include a former Chancellor, a general, scientists, an astronaut, comedians, actors, a drag queen and a nun.

Berlin, January 8th, 2022. Update: Sofia/Bulgaria, February 13th, 2022, 08:21 a.m. CET (The Berlin Spectator) — The outcome is a foregone conclusion. On February 13th, 2022, Germany’s Federal assembly will definitely give none other than Frank-Walter Steinmeier another five years. Or he will give them to the country, by serving it. Four of the parties that are part of the Berlin Bundestag (or even five, depending on how we count them) want him to remain in office.

Gerhard Trabert, the candidate for the far-left ‘Die Linke’ does not have the votes needed to win. Neither do Max Otte, the man the extremist right-wing AfD nominated, or Stefanie Gebauer from Brandenburg. The ‘Freie Wähler’ (‘Free Voters’) coalition wants her to take over.

While the outcome of the election is already known, other aspects are interesting here, including the make-up of the Assembly. It has 1,472 members half of whom are the members of the Bundestag. The other half was elected by Germany’s state parliaments. There are very prominent delegates, including former Chancellor Angela Merkel, and less prominent ones. The parties in the states put together a rather diverse Federal Assembly.

Dieter Nuhr, a well-known comedian, will be voting. So will Dirk Zöllner, the founder and lead vocalist of the German band ‘Die Zöllner’. Doctors are part of it. So are scientists, nurses, mayors, high-ranking soldiers, former ministers and governors, athletes, a drag queen by the name of Gloria Viagra, a nun, union people, the publisher Friede Springer, reporters, managers, and former civil rights activists from the former GDR. Even Alexander Gerst, an astronaut who took part in two space missions, is part of the Assembly.

Frank-Walter Steinmeier is a respected Federal President. Since the Corona pandemic commenced, he has held televised speeches to the nation in which he asked the Germans to hang in there, to get vaccinated and not to follow the extremists and conspiracy theorists who keep on protesting against immunizations and other anti-Corona measures. He was the one who insisted Germany’s Corona victims needed to be commemorated and organized a big ceremony for this purpose at which he spoke as well.

In 2020, when part of the world commemorated the victims of the Holocaust, 75 years after the liberation of Auschwitz, he held several impressive speeches at ceremonies in Auschwitz itself, in Yad Vashem and at the Berlin Bundestag. “The worst crime was committed by my countrymen”, the President stated in Israel. He also found the right words on May 8th, 2020, when the 75th anniversary of the defeat of Nazi Germany was commemorated. He reminded his nation that “freedom and democracy are our mission”. At one point during his first term, he was criticized for congratulating the evil Teheran regime on the 40th anniversary of the Islamic Revolution. This ‘mishap’ led to the question whether too much diplomacy is harmful.

Frank-Walter Steinmeier, wo turned 66 on Wednesday, did not come out of nowhere. He headed the chancellery for Chancellor Gerhard Schröder. In Angela Merkel’s first grand coalition, the Social Democrat was Foreign Minister and Vice Chancellor. His own party, the SPD, obviously supports a second term for him, but so do the Greens, the center-right FDP and even Germany’s conservative “union parties” CDU and CSU. The extremist right-wing ‘AfD’ and the far-left ‘Die Linke’ are the two Bundestag parties that do not support him, but they do not stand a chance, meaning they will not be able to prevent a reelection with the 223 votes they have in total. ‘Die Linke’ presented its own candidate on January 11th.

In Germany, the President does not head the government, but he is powerful anyway. He signs new laws, appoints the Chancellor and the Ministers and he can even dissolve the Bundestag. At the same time, he has ceremonial obligations and is basically the main representative of the Federal Republic of Germany. When kings and queens visit Germany, he gets busy. But he also meets with ‘regular people’ and talks to them, and he intervenes when there are important national discussions by commenting on them and putting them in perspective. Frank-Walter Steinmeier will continue to do so for another five years.