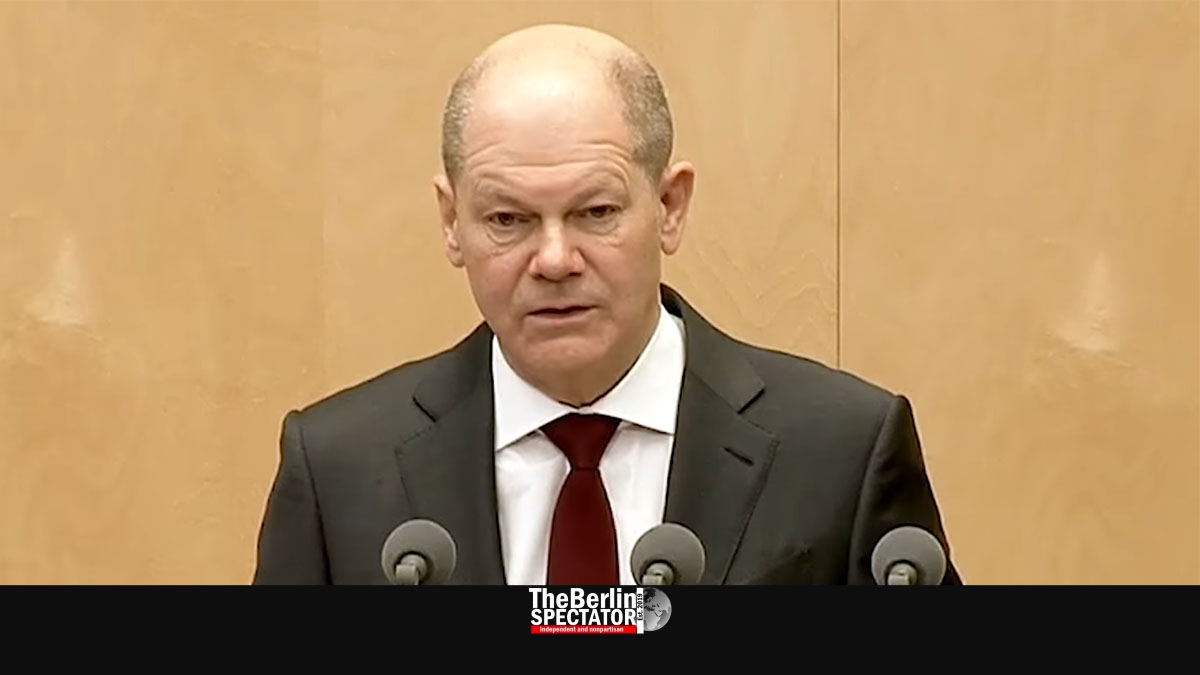 At the Bundesrat in Berlin, Chancellor Olaf Scholz said the peak of the Omicron wave was in sight. Therefore, an opening step could be taken now, and more later.

Sofia/Bulgaria, February 12th, 2022 (The Berlin Spectator) — A tired-looking Chancellor Olaf Scholz came to the Bundesrat on Friday. In a speech he delivered he said the German health system had withstood the ongoing Corona wave so far. This fact showed that “our measures do work”. He stated vulnerable groups had been protected. This needed to be the case in the coming weeks as well, also because there were almost 3 million Germans above 60 years of age who had not been fully vaccinated against Corona, and 2.2 million individuals in the same age group who had not gotten booster shots.

According to scientific insights, the peak of the Omicron wave was in sight, Scholz stated on Friday. For this reason, a first opening step would be discussed at the next Corona conference. It is scheduled to take place on Wednesday and includes the Chancellor as well as the First Ministers from Germany’s federal states. According to Scholz, additional opening steps will be considered at a later time because the government does not want to gamble away the successes Germany has registered. At the same time, the country would be prepared incase the infection numbers increased again, Scholz stated at the Bundesrat, which is the legislative body that represents the sixteen states Germany has.

Vaccinations were the way out of the pandemic, which was why the government would continue to attempt to convince people of their efficacy, the Chancellor vowed. He also said there were people who needed protection the most, namely sick persons and the oldest individuals. This was why mandatory vaccinations for nurses, doctors and caretakers were so important.

Both the government and the largest opposition parties, CDU and CSU, want an incremental easing of Corona restrictions. The CDU’s new Secretary General Mario Czaja told the ‘Neue Osnabrücker Zeitung’ daily, he understood people were longing for a “freedom day”. But the right way to go was a lifting of Corona rules in several steps. Caution was necessary, and decisions needed to be taken based on scientific data.

In the meantime, the mandatory vaccination law Scholz’s government wants is taking shape. At the Berlin Bundestag, MPs of the three government parties SPD, ‘Bündnis 90/Die Grünen’ and FDP presented a draft bill. If it passes, all adults will be informed about Corona immunizations, counseled on the matter and finally vaccinated. If the law passes the parliament, everyone from 18 years of will need certificates that prove they were vaccinated three times from October 1st, 2022. Alternatively, they can have documents that prove they recovered from COVID-19. Pregnant women and persons who cannot be vaccinated for medical reasons will be exempt.

The new Corona numbers the Robert Koch Institute released are still alarming. In the past 24 hours, 209,789 new infections were reported, while the Seven Day Incidence reached 1,474.3, which is a new all-time high. But the Incidence seems to be increasing at a lower pace. Since yesterday, 198 Corona patients died.

Berlin Wants Residents to Book Hotel Rooms in their Own City