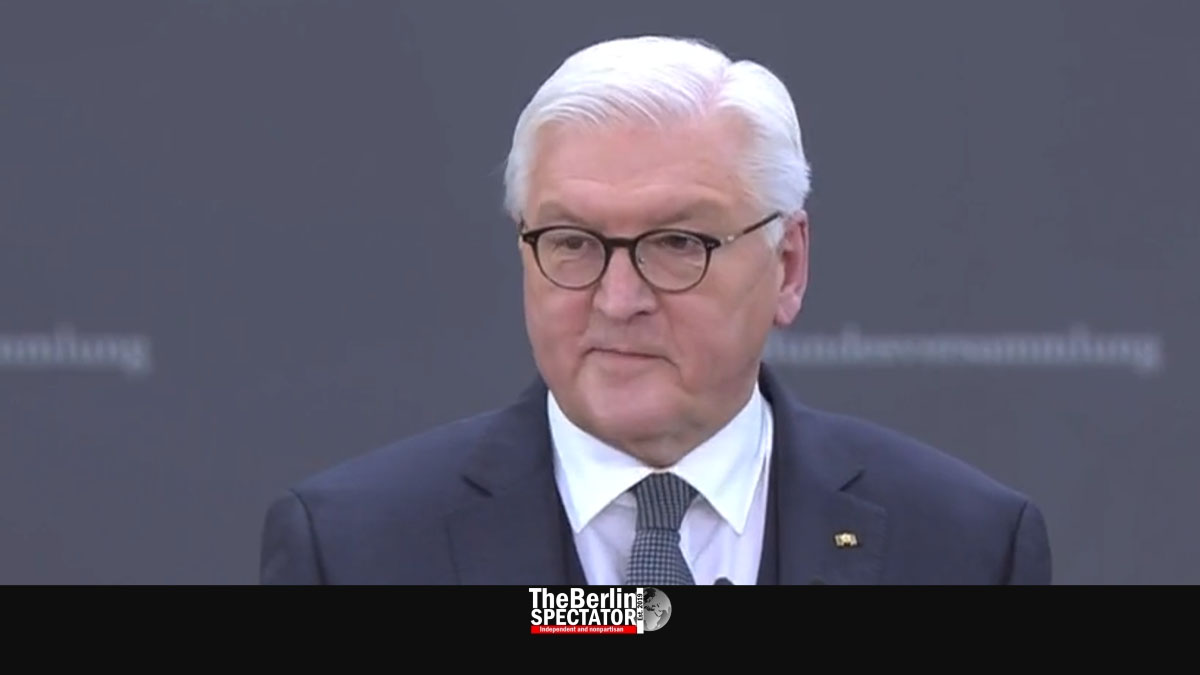 Sofia/Bulgaria, February 13th, 2022 (The Berlin Spectator) — After 7:00 a.m. this morning, a long line developed in front of the Reichstag building in Berlin. More than four hours before the Federal Assembly was scheduled to commence next door, at Paul Loebe Haus, its members were supposed to get tested for Corona. This early, the temperature in Berlin was -1 degree Centigrade (30 degrees Fahrenheit), which is why waiting out there was probably not enjoyable. Nor were the roll calls the parties performed once their people were finally inside.

The Federal Assembly has 1,472 members, half of whom are the MPs. The others got chosen by Germany’s state parliaments. They had the right to pick any German citizens above 40 years of age. For this reason, the Assembly is very diverse. It even includes actors and comedians. Since five parties supported Steinmeier, namely his own center-left SPD, the left-wing Greens, the center-right FDP as well as the conservative ‘union parties’ CDU and CSU, the incumbent did not really have to worry about the result.

Frank-Walter Steinmeier ended up getting 1,045 of 1,472 votes. Once he had won, he said there was imminent danger of a war in Eastern Europe. Russia was responsible for this situation. “I appeal upon President Putin. Loosen the sling around Ukraine’s neck. Join us in looking for a way that preserves peace in Europe”, Steinmeier stated. “I can only warn Putin not to underestimate the strength of democracy.” He said the build-up of troops at the Ukrainian border could not be misunderstood. Germany’s President stressed the people in Ukraine had the right to live without fear and threats, to self-determination and sovereignty.

Steinmeier also mentioned the Corona crisis. He wanted to help heal societal wounds that had developed during the pandemic. He also vowed he would not get out of the way of the dispute with radical opponents of the Corona policy, including those who were ready to use violence.

Frank-Walter Steinmeier has eleven predecessors. Some were very popular Presidents, including the late Roman Herzog, the late Richard von Weizsäcker and the Late Walter Scheel. Christian Wulff and Host Köhler ran into issues. The problem about all twelve of them is their gender. Not a single woman has held the highest office in the Federal Republic.

More Important than Ever

In Germany, the President does not head the government, as he or she does in the United States of America and many other countries on this planet. He has other tasks, which include signing new laws, appointing the Chancellor and the Ministers, and dissolving the Bundestag in case of emergency. At the same time, he has ceremonial obligations and speaks to the national about national challenges such as disputes or pandemics. Germany’s President represents the entire country.

The most important word in the job description is nonpartisanship. While the Federal President is in office, his or her party membership is being shelved. That is because the President is the one official who speaks for everyone. He also speaks to everyone. He does not defend his (former and future) party, but democracy. In times like these, in which an extremist right-wing party like the AfD is represented in the Bundestag and all state parliaments, and in which many Corona deniers use the pandemic to attack the state and democracy itself, this aspect has become more important than ever in the history of the Federal Republic of Germany, which started in 1949.

Bärbel Bas, the Bundestag’s President, mentioned the situation around Ukraine as well, in her opening remarks. She stated all means democracy offered needed to be used to prevent an escalation. “War only knows losers”, she said. She also greeted all Assembly members, including former Chancellor Angela Merkel, who got standing ovations.