Hamburg: When the Elbe River Came into People’s Bedrooms 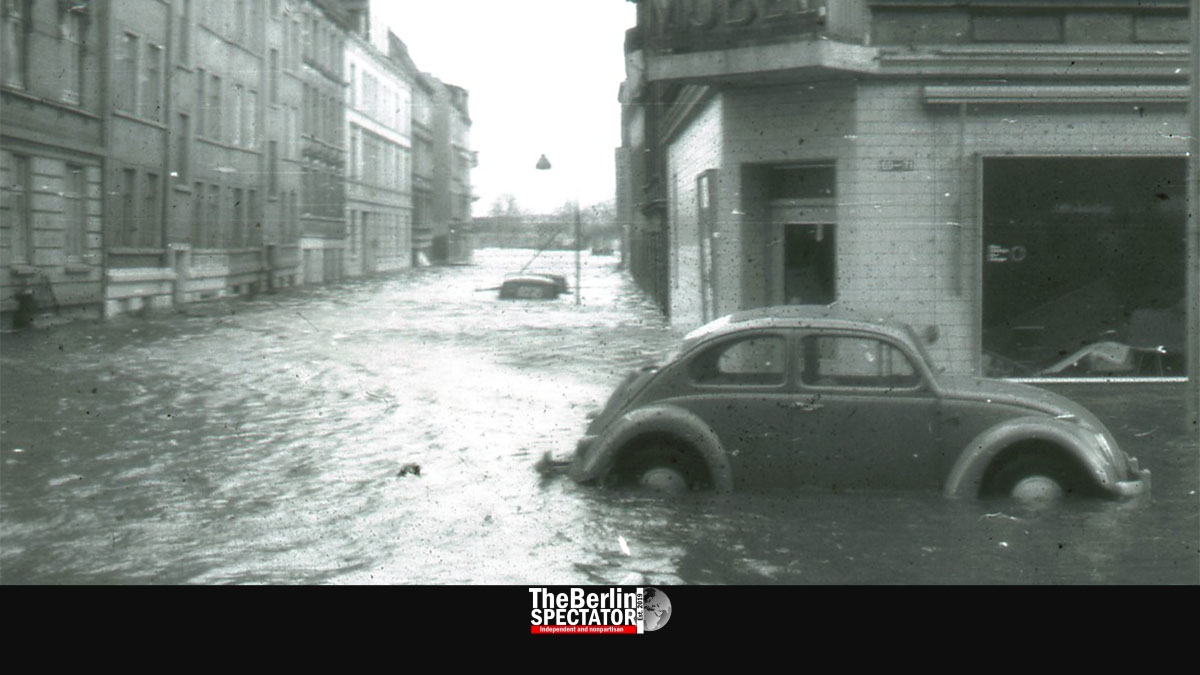 In Wilhelmsburg, a borough in Hamburg that is located between two arms of the Elbe River, people started going to bed. A storm surge had been announced. But hardly any residents knew their lives were in danger until it was too late.

Berlin, February 15th, 2022 (The Berlin Spectator) — On February 12th, 1962, the entire Noth Sea coast was affected by a tide surge. A winter storm made the water levels rise some 2 meters (6.5 feet). Because of a giant low weather system over north-western Europe, the storm had nowhere ago. Four days later, in the late evening of February 16th, a hurricane brought death and grief to the northern-western part of what was West Germany at the time.

In Hamburg alone, 315 people died. The total number of deaths was 340 and there were many injuries. The story of the North Sea flood in 1962 is one of failure and neglect, but also of initiative and bravery. It happened in times in which the number of television channels people could receive was one. ARD TV did not warn its viewers on time, in spite of a request by the Sea Weather Authority. In part, this problem had technical reasons.

Obviously, nobody in Hamburg or anywhere in the world had smart phones they could have received severe weather warnings on. Nobody had personal computers either. With this invention, forecasters and other weather experts could have come to the right conclusions earlier. Residents in Wilhelmsburg and other parts of Hamburg and the authorities in the city would have been alerted.

Peak of the Iceberg

But all of this was only the peak of a big iceberg of problems. Only fifteen years before the big North Sea flood happened, the Allies defeated fascist Nazi Germany. During bombing raids on Hamburg in 1944 and 45, levees along the Elbe were damaged. After 1945, they were repaired with the only material there was no shortage of, namely rubble. But, as a result, the levees could not withstand the pressure they were under on February 16th, 1960, exactly 60 years ago.

Due to the level 9 (severe) storm system that covered north-western Europe, the Norwegian Sea pushed a lot of water into the North Sea. From there, it got into the Elbe and Weser rivers. Before the floods took place, the low tide in Hamburg was comparable to the usual high tide. But, at this moment, at about 8:00 p.m., hardly anyone expected the water to rise as high as it would. All ferry traffic was stopped at 9:00 p.m. because the water in the Elbe was rough, almost like on the world’s oceans. It also flooded the first streets along the Elbe.

Then, hell broke loose. Wilhelmsburg became a disaster zone, the entire Port of Hamburg was flooded badly. This storm tide even flooded Rödingsmarkt in the city’s oldtown. People who lived in lower areas, close to the river, were surprised in their living rooms and beds. Hundreds could not escape. Others climbed on the roofs of their apartment blocks where they waited for rescue for many hours during this cold and stormy night. There were residents who climbed on trees because it was their only chance for survival.

More problems made things a lot worse than they already were. Germany mostly relied on transmission lines above the ground. Therefore, the storm caused electricity and telephone outages. This issue cost many lives because the authorities were affected too. Neither could they be alerted, nor did they have the possibility to warn or contact anyone on the phone once they finally understood what was going on. The fact that the Hamburg authorities ignored the warnings they received from coastal towns also contributed to the catastrophe that night.

High-ranking officials just stayed at home, even when a state of emergency was finally declared late at night. Hamburg’s First Mayor Max Brauer was on holiday. On February 16th, 1960, hardly anyone seemed to have the faintest clue who was responsible or what needed to be done, except for one person. Helmut Schmidt, who would be Chancellor of the Federal Republic a decade and a half later, was Police Senator in Hamburg at the time. The leadership style he brought in finally made the authorities move. He started giving orders at a make-shift operations center.

Because of his experience as a former MP who had dealt with defense policy issues, Schmidt had good contacts in the Bundeswehr, West Germany’s armed forces, and he knew high-ranking NATO officials. Even though he had absolutely no authority of this kind as a Hamburg Senator, he made sure military helicopters would move in early the next day, to save people.

In the morning of February 17th, 1960, the extent of the disaster became evident. Bodies were floating in the Elbe, buildings were destroyed and badly damaged. Hamburg actually gave up the Waltershof neighborhood after the flood because it had been washed away. There was debris everywhere.

Since 1960, there have been numerous storm surges in Hamburg. By now, the city’s levees are more stable and higher. The information age makes transmissions a lot easier. Hamburg also has emergency plans that can be put in place quickly and a system that includes automatic barriers which will block access to the streets along the Elbe river and the port when the danger grows.

On the eve of the 60th anniversary of the flood, Hamburg’s First Mayor Peter Tschentscher said it had brought a lot of sorrow to the city. At the same time it had shown that Hamburgers stood together in emergency situations. Since, the city’s disaster management had been reorganized.

Photo at top of page by Gerhard Pietsch/GFDL (see license)

Corona Policy: Germany to Get Rid of All ‘Pervasive Protection Measures’ in Three Steps