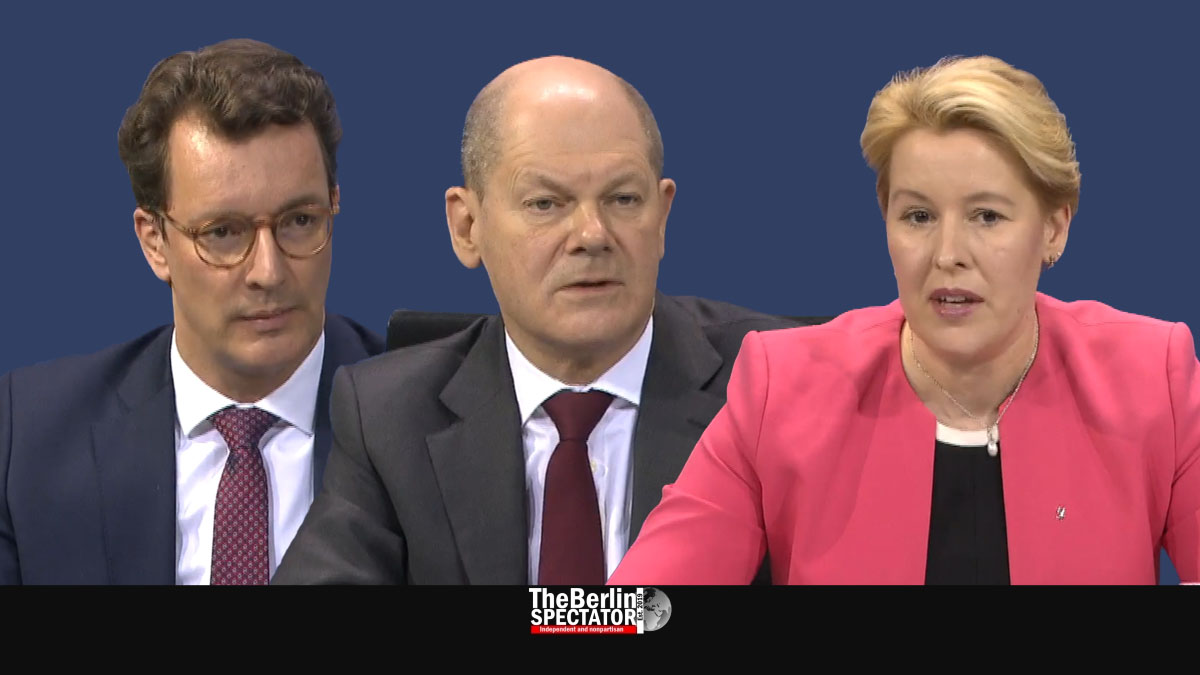 Olaf Scholz and Germany’s Governors just decided to remove most Corona restrictions in three steps until March 20th, 2022. For now, more people will be allowed to gather and shopping will become easier for unvaccinated persons. More restrictions will be removed in the next few weeks.

Berlin, February 16th, 2022. Update: February 17th, 2022, 06:21 a.m. CET (The Berlin Spectator) — Today’s Corona meeting included Chancellor Olaf Scholz, twelve First Ministers, one State Secretary, two First Mayors and one Governing Mayor. As expected, the participants decided to go with a three-step plan. First, the contact restrictions and the ‘2G rule’ in non-essential shops will be lifted. This means that everyone, including unvaccinated individuals, will have the right to enter any shop as long as they adhere to the mask rule. At the same time, the number of people who may gather is not limited anymore.

More opening steps are scheduled for March 4th, before “all pervasive Corona protection measures” are supposed to go on March 20th, 2022 (see details here). Three days before, on March 17th, another Corona meeting will take place. After today’s discussion, Olaf Scholz promised he would make sure the federal states would be able to act against Corona after March 20th, when parts of the German Infection Protection Act expire, by working on legal requirements ahead of time.

He stated Germany could look ahead more confidently now because decisions had been taken in the past months which had made sure the country had gotten through this part of the pandemic better than other countries. He was referring to the ongoing Omicron wave. It looked like its peak had been reached, Scholz said. If things continued to develop as expected, the situation would constantly improve in the coming weeks.

There were less men and women in intensive care than there would have been without the measures Germany had taken, the Chancellor stressed. He said the number of new infections had not increased as much as experts had feared, because of Germany’s Corona policy. “We have reached our goal to protect the health and lives of as many people as possible. And we prevented another lockdown.”

Because of the contact restrictions that had been implemented, today’s situation had been reached, and because the right decisions had been taken in the past, the federal government and the states could ease the restrictions now, step by step, Scholz said. But he stressed Germany needed to continue to be careful, since the pandemic was not over. “The infection numbers are still high. We are just expecting them to drop soon”, he stated.

For this reason, everyone had to be convinced to get vaccinated against Corona, the Chancellor said. “We want to continue administering first shots, second shots and booster shots”, he insisted. “The next Corona variant could come around the corner at any moment and pose new challenges. We have to be in the position to react in this case.”

Scholz said in spite of the upcoming spring and the better times that could be ahead, the fact that the next fall and winter would be coming too should not be forgotten. Therefore continuing to vaccinate people and preparing mandatory Corona vaccinations was the right thing to do. The latter measure would be required once the weather got colder again, the Chancellor predicted.

Hendrik Wüst, the Governor of North Rhine-Westphalia and chairman of the Conference of First Ministers, said the states had agreed that a basic protection against Corona was required after March 20th. He was referring to the legal part Scholz had already promised to work on. Wüst also criticized the Robert Koch Institute for its recent decision to shorten the duration of the ‘recovered’ status from six to three months without informing the federal states in advance.

Berlin’s Governing Mayor Franziska Giffey said the people were expecting opening steps now. Those were justified because the peak of the ongoing Corona wave had been surpassed. Since the situation was improving, easing restrictions was necessary. Even before today’s decisions were taken, Berlin and other federal states had announced a retraction of some Corona rules.