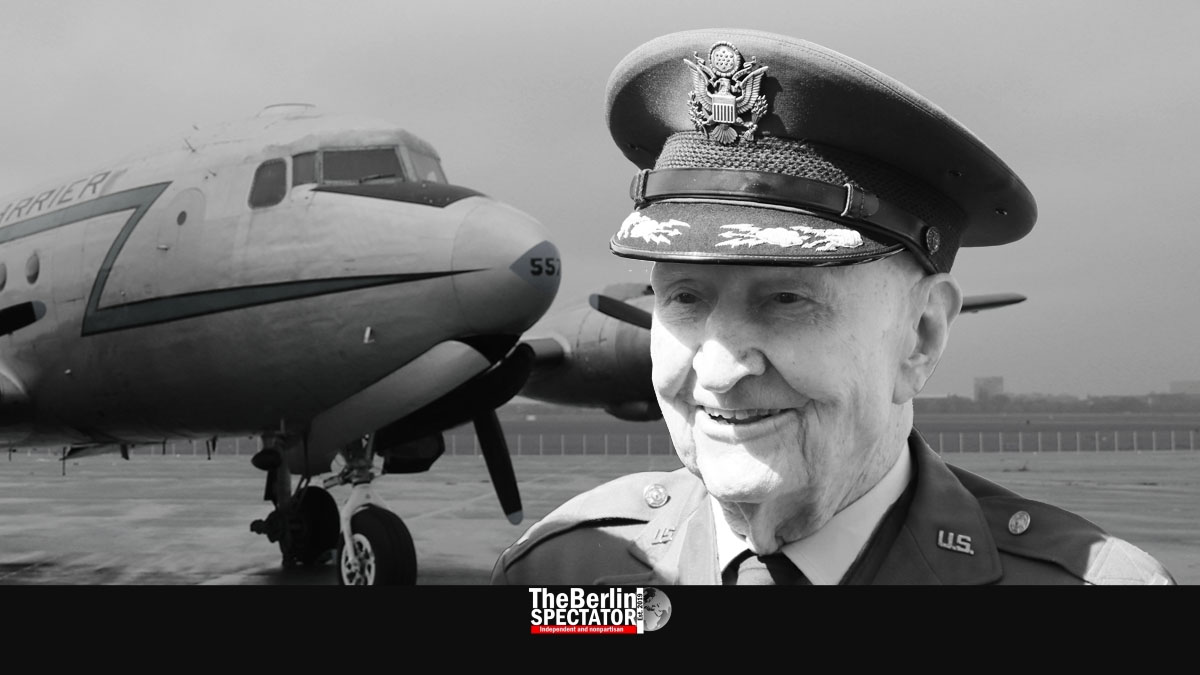 Colonel Halvorsen was a young U.S. Air Force soldier when Moscow blocked access to Berlin’s Western sectors in 1948. He quickly became the most famous ‘Raisin Bomber’ pilot. On both sides of the Atlantic, he will be missed.

Berlin, February 17th, 2022. Update: February 18th, 2022, 05:55 a.m. CET (The Berlin Spectator) — Berlin has friends all over the world, including in the United States in America. Some of them are not with us anymore, including John F. Kennedy and Ronald Reagan. On Thursday, Gail Halvorsen passed away.

If you were born on October 10th, 1920, and you die 101 years later, nobody will be surprised, but your loved ones will be sad they lost you. If your name was Gail Halvorsen, an entire city, an entire country, two continents will be sad. ‘Hal’ helped the children and everyone else in West Berlin, and he was connected to Berlin, including the reunited city, as long as he lived.

In 2019, at age 98, he came to the commemoration event that marked the 70th anniversary of the end of the Berlin Airlift he had been part of. He wanted to be there in 2020 as well, but Corona prevented him from crossing the Atlantic Ocean again. In a letter “to (former) Governing Mayor Müller and my dear friends in Berlin” he apologized and said “our thoughts and the gratitude in our hearts know no boundaries.”

It happened on March 25th, 1948. The Soviet Union restricted ground traffic to the American, British and French sectors in Berlin. In June, Moscow implemented a blockade that could have starved hundreds of thousands of people. But the Americans and other Allies organized the biggest airlift of all time. Colonel Gail Halvorsen was 28 years old when the Berlin Blockade and the Berlin Airlift commenced.

As one of the pilots who made sure the people in Berlin’s western sectors would not starve, by flying in food and other items they needed, he soon noticed children who were waving at him every time he flew in and out during daytime. It did not take long until he dropped chewing gum and candy for them whenever he flew in with more food for Berlin.

Franziska Giffey, today’s Governing Mayor, said Berlin had been Gail Halvorsen’s second home. He had become famous as a ‘Raisin Bomber’ pilot. His “wonderful gesture for the children is directly connected to Berlin’s post-war history.” Mrs. Giffey stated the Airlift had made “victors and occupants” friends. Gail Halvorsen had been their face, when the Western Allies had become “guarantors of freedom”.

“Halvorsen’s profoundly humane actions never was forgotten”, the Governing Mayor said. “He had many friends in our city and visited it many times, throughout his life.” Its citizens would miss “his sweeping drive”, which he even had had at a very high age. “With his next of kin and his friends, Berlin mourns this great person.”

Dennis Buchner, the President of the Berlin House of Representatives, stated Gail Halvorsen had visited the city state’s parliament several times “as a friend.” These encounters would not be forgotten, Buchner said. “We will miss him. Berlin lost a loyal friend. He will live on in our hearts.”

Emily Margarethe Haber, Germany’s Ambassador to the United States, said Gail Halvorsen had given hope to millions of Germans. “When food supplies were short during the Berlin Airlift, he dropped candy from his plane for the children of the city, replacing the fear of a military aircraft with dreams of a brighter future. When supplies and spirits were low, ‘the Candy Bomber’ made them soar!”