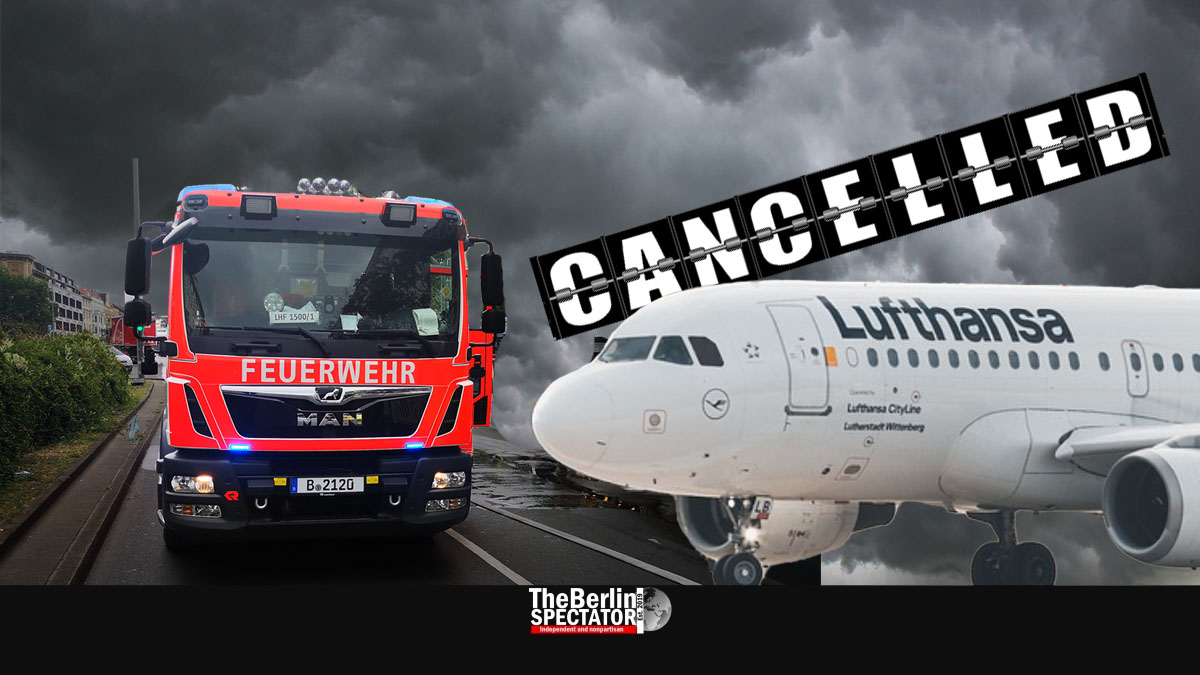 A major storm system hit Germany last night. Especially the northern half of the country is affected. The severe weather is not supposed to vanish until Friday, according to forecasters.

Berlin, February 17th, 2022. Update: 1:37 p.m. CET (The Berlin Spectator) — In Berlin, the Fire Department declared a state of emergency after 3:00 a.m. this morning because it could not cope with all weather-related operations on its own anymore. As a result, the city’s volunteer fire brigades were activated. This situation is being caused by a major storm which is creating havoc on Germany’s islands, along the North Sea and Baltic Sea coast, in the rest of northern Germany, in the Berlin-Brandenburg region as well as in Central Germany.

People Asked to Stay at Home

In the capital, the storm brought in heavy rainfall at night. For a while, it receded in the early morning hours, only to return a few hours later. Berlin is now expecting extremely strong winds with speeds of up to 130 km/h (81 mph). The authorities asked residents to stay in their homes whenever possible, and to keep windows and balcony doors closed.

Loose objects outdoors needed to be fixed, a statement by the Fire Department said. Berliners were asked to refrain from entering forests or parks, because of flying branches and falling trees. Similar warnings were spread by authorities in several parts of Germany. In both Berlin and Brandenburg, schoolkids were allowed to stay at home on Thursday.

Two and a half weeks after the last winter storm it went through, and exactly sixty years after the big storm surge of 1960, Hamburg is going through another one right now. The famous Fish Market was just flooded yet again. Until 5:00 a.m. the Hamburg Fire Department was part of 65 weather-related operations. A thick tree branch smashed into an ‘U-Bahn’ train in the late evening. Nobody was injured, but the trains on the ‘U1’ line could not move until the branch was removed.

Fire fighters also had to use their pumps to get rid of water that had flooded the Autobahn A7 around its Bahrenfeld exit. Another storm surge at the Port of Hamburg is being expected on Thursday afternoon. Hamburg’s largest cemeteries will remain closed today because of the danger posed by flying branches.

There is more trouble. According to German-language media, the cruise liner AIDAprima could not reach the Port of Hamburg on time. Therefore it is now battling the roough sea around the island of Helgoland while its passengers are still on board. The ship will not be allowed to come in until the storm recedes. At Hamburg Airport, most flights that were supposed to leave before noon had to be cancelled due to the storm.

At Germany’s biggest airport, in Frankfurt, things were not quite as bad. But many domestic Lufthansa flights, including those to BER Airport in Brandenburg and to Hamburg, were cancelled. At the same time, Deutsche Bahn was confronted with fallen trees on its train tracks and similar issues. Delays and cancellations were announced, also because the storm threatens all trains, especially outside the cities.

At this stage, the extreme weather mainly affects long distance trains. All connections in Schleswig-Holstein, Hamburg, Bremen, Lower Saxony, Mecklenburg-Hither Pomerania, Berlin and Brandenburg were cancelled until further notice. But these problems were felt in the rest of Germany as well because trains for the south that do not leave the north will not reach their destinations and mess up schedules down there too. Passengers are supposed to check the status of their trains in advance. Tickets that were purchased for specific trains today may be used in the next seven days.