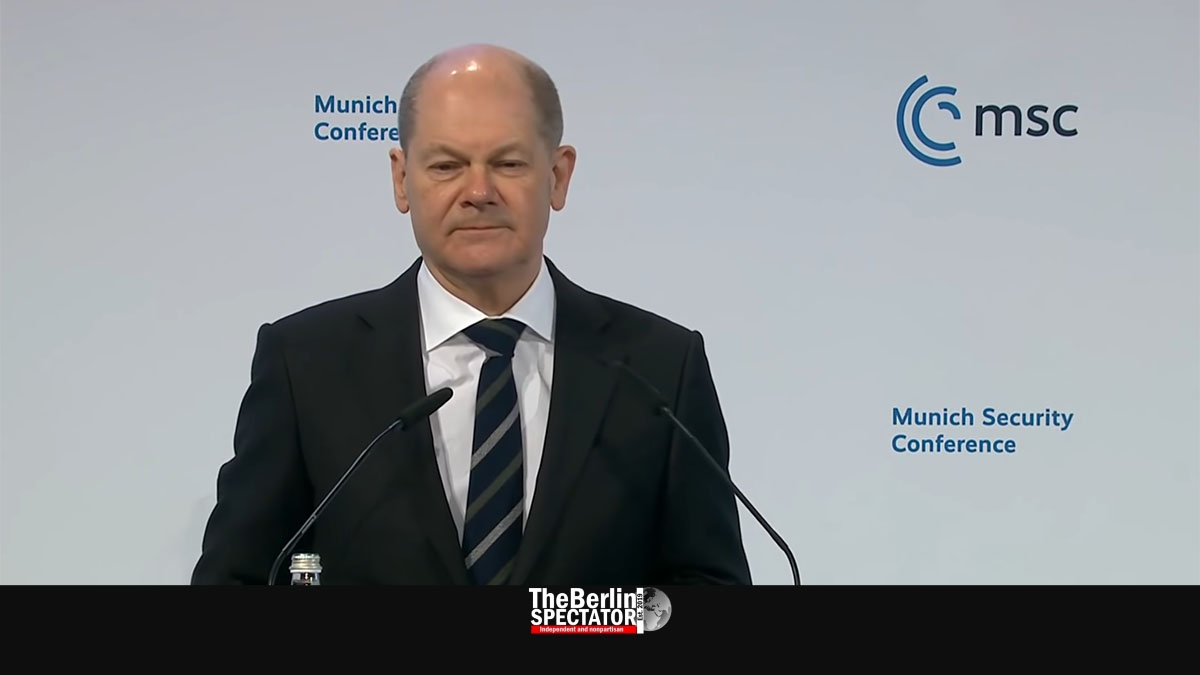 Lufthansa, Germany’s flag carrier, is about to stop its flights to Kiev and Odessa while the German Embassy in Ukraine told its nationals to get out of the country. In Munich, Chancellor Olaf Scholz warned Russia one more time.

Berlin, February 20th, 2022. Update: 7:53 a.m. CET (The Berlin Spectator) — When the aggressor tries to fabricate a pretense for war, which seems to be the case in Ukraine, the tension rises. When embassies ask their citizens to leave a country they believe could become a war zone, and when its main airline cancels most flights to the same state, things are definitely serious. Russia’s recent announcement according to which it was withdrawing its forces from the Ukrainian border turned out to be another lie.

Lufthansa Group runs several airlines in Germany, Austria and Switzerland. The company just announced it would “suspend all regular flights to Kiev and Odessa” until the end of February, or until further notice. Lufthansa was “constantly monitoring the situation” and would take decisions about more flights at a later time, a statement read. No airline wants to put its passengers or aircraft in jeopardy. But the German carrier’s flights to Lviv in western Ukraine are supposed to continue.

The next indication for the seriousness of the situation in Ukraine popped up when the German Foreign Ministry asked German citizens to leave the country. “Check whether your presence is necessary. If not, leave the country without delay”, an official statement read. Austria’s Embassy conveyed a similar message to its nationals. A “significant deterioration of the situation” was expected, also because the number of “incidents” in eastern Ukraine had increased substantially. The Foreign Ministries in Berlin, Vienna and other capitals would not order their embassies to send out messages of this kind if the danger was not big.

Exactly 1394 kilometers (866 miles) to the west of Ukraine, in Munich, Western world leaders gathered at the Security Conference (MSC), an event the timing of which was perfect. This edition was not so much about security in the entire world, but mainly in Ukraine. Obviously, the Russian government was not represented this time.

At the MSC, U.S. Vice President Kamala Harris said the conference had not taken place “under such dire circumstances” since the Cold War. “Today, as we are all well aware, the foundation of European security is under direct threat in Ukraine.” The U.K.’s Prime Minister Boris Johnson said this was a moment of great danger for the world, which was why it had never been more important “to uphold our unity” (quote translated back from German).

As Russia’s President Putin was busy starting yet another “military exercise”, one that involved nuclear-capable missiles, Olaf Scholz appeared behind the microphone at the MSC. Again, he warned Russia of an attack on Ukraine. “A military aggression against Ukraine would be a big mistake”, the Chancellor said. For any further violation, Russia would have a very high price “politically, economically and geostrategically”.

The aspiration was to resort to diplomacy as much as possible, “without being naive”. Scholz added this was “about nothing less than peace in Europe”. There was a danger of war on the continent and the risk had not been averted. Nothing justified Russia’s military buildup with 100,000 soldiers around Ukraine, Scholz stated. No decision on a NATO membership for Ukraine would be taken anytime soon, he said, referring to an aspect Russia had made a causus belli. Generally, every state had the right to freely choose any alliance it wanted to become a member of.