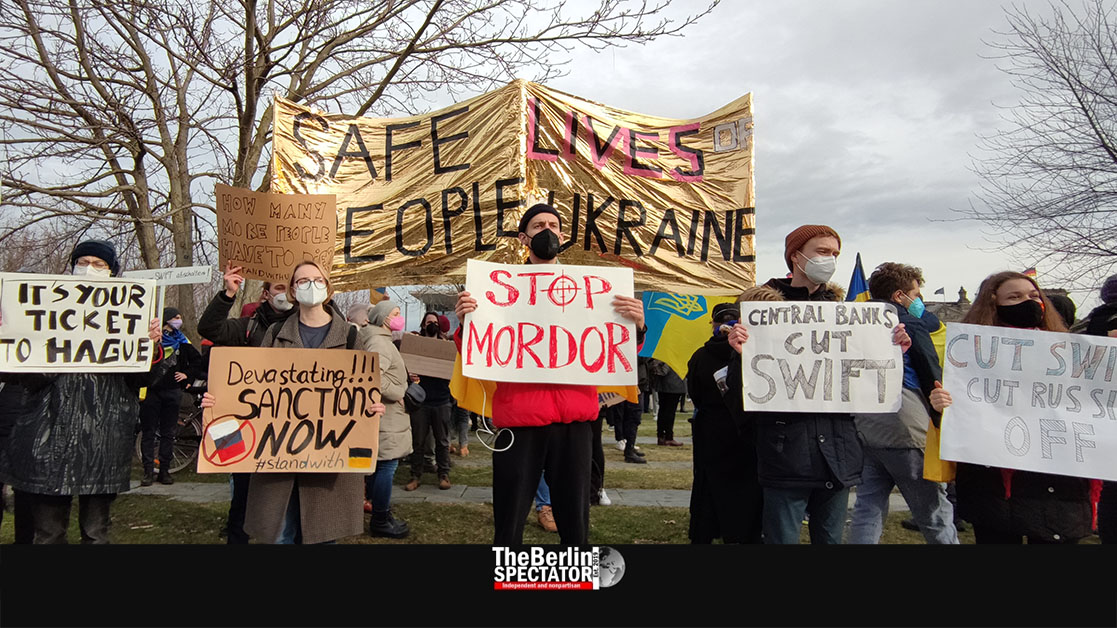 In Berlin, hundreds of protesters rallied against Russia’s war in Ukraine. In front of the chancellery, they demanded hard sanctions against Moscow. Some called for weapons for Ukraine.

Berlin, February 24th, 2022 (The Berlin Spectator) — About 1,000 Ukrainians, Germans and people of other nationalities or origins took part in a big protest against Vladimir Putin’s war on Ukraine. From Unter den Linden, the boulevard where the Russian Embassy is located, they went to the chancellery. This is where they gathered for about two hours.

Many protesters held signs saying “Stop the Russian invasion!”, “Sanctions now!”, “Stop Putin!”, “Russia Stay Away!”, “Weapons for Ukraine!”, “The war is back. Stand with Ukraine!”, or “Do something!”. A demonstrator who seemed to be Russian carried a sign that read “Putin isn’t Russia. We are against the war”.

Some protesters stayed in front of the Russian Embassy, including a group of Ukrainian and Russian friends. “No to the war!” it said on a sign they held, in Russian and German. Another one read “Stop the air raids on Kharkov, Kiev, Odessa!”. A man next to them used the F-word twice on his sign. The message was the same, but the wording was somewhat different.

Prayer Against the War

In the morning, there had already been a demonstration against Russia’s attack in Berlin’s city center. Yet another one was announced for 5:00 p.m. CET at Brandenburg Gate, and one more in Berlin’s very international Wedding borough. At Berlin Cathedral, a prayer against the war was supposed to take place too.

Because of the heated atmosphere in the German capital, the Berlin Police Department announced it would protect “relevant objects” more than usual. The authority did not elaborate, but probably meant the Russian and Ukrainian Embassies and other institutions affiliated with those countries. Dozens of police officers were on site during all of today’s protests. No incidents were reported.

The Berlin Senate is preparing for the arrival of refugees from Ukraine. At the Berlin House of Representatives, Environment Senator Bettina Jarasch stated both the Senate and the state parliament needed “to get ready for what might be coming in the next weeks”. She said Berlin was already talking to the federal government about accommodating people who would flee from the war in Ukraine.

Representatives of the conservative opposition commented on the situation too. For the CDU in Berlin, Kai Wegner said he had never thought he would experience a war in Germany’s direct neighborhood in his lifetime. He called Putin a “despot” and said Germany, Europe and the World needed to send a clear message to Moscow.