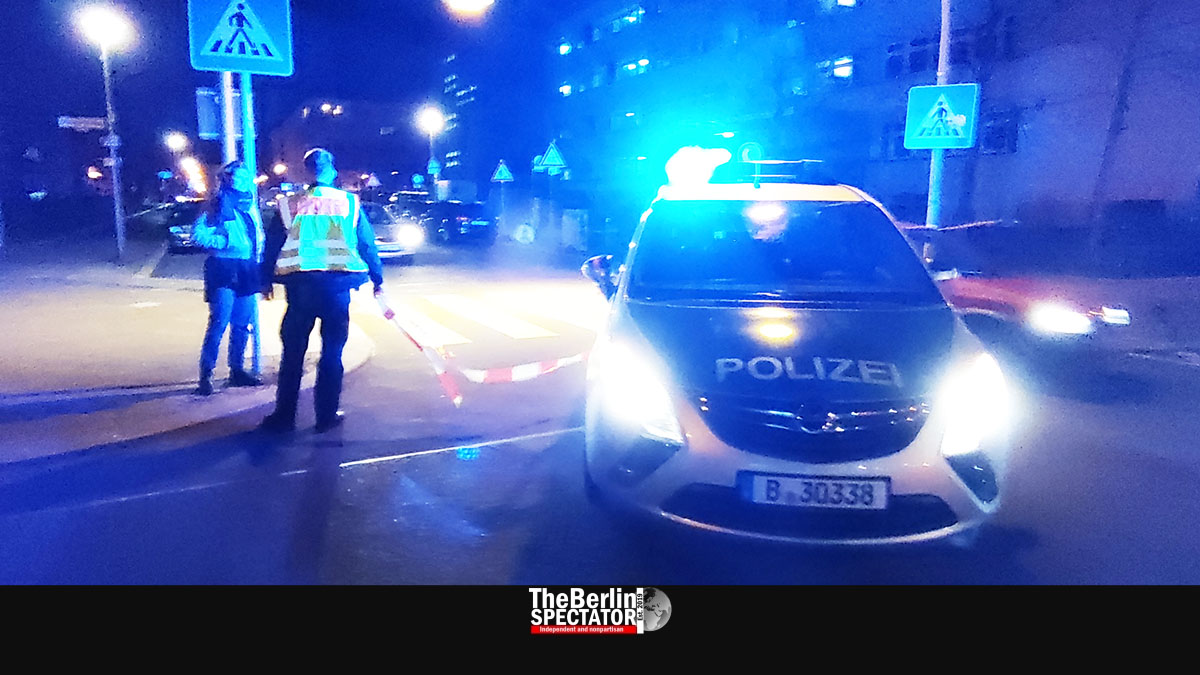 Berlin, February 25th, 2022 (The Berlin Spectator) — At a construction site in the less posh part of Berlin’s Prenzlauer Berg borough, a crane operator unintentionally picked up an American WWII bomb with his machine on Thursday. He was lucky it did not go off. Because the explosive with a weight of 500 kilos (1,102 pounds) was unearthed and moved, Berlin’s experts had to go ahead an defuse it on the same day.

Before the city’s experienced bomb disposal unit could do its job, 9,000 residents in the area needed to be evacuated. The police set up a perimeter with a radius of 250 meters (273 yards) which included Anton Saefkow Park, part of Kniprodestrasse and part of Danziger Strasse, a main traffic artery in Berlin’s Pankow district in the city’s northeast.

Two hundred officers were part of the operation. Two of them circled the area in a police van equipped with loudspeakers. Their announcement said all residents needed to vacate their homes “now” and expect to be away for several hours. Inhabitants were told to make sure their stoves were switched off and to check on their neighbors. If anyone was not able to move, the police would come and help. Usually, these announcements are made in Turkish, Arabic and English as well, but this time the Police Department stuck to German.

While the announcement was played over and over again without interruption, other officers went from door to door. They ordered everyone to leave immediately. Ambulances were called in to transport sick and handicapped persons. An emergency shelter was set up at the Velodrom, which usually serves as an indoor track cycling arena.

At all entry points to the perimeter, police officers made sure nobody entered. At the intersection of Danziger Strasse and Hans Otto Strasse, some individuals got permissions to go to their apartments quickly in order to get items they urgently needed. One lady wanted to go home after a long run, in order to take a shower and put on dry clothes. It took her a few minutes to convince the cop in charge to let her go. “Make it quick”, he told her.

A few steps down the street, representatives of Berlin’s public transport provider BVG were busy preparing for a temporary shutdown of tram line M10. They said the Police Department was going to tell them when to stop those trams, shortly before the bomb disposal unit would defuse the explosive. Two bus lines had to be shut down in the afternoon. The ‘S-Bahn’ train lines S41, S42, S8 and S85 were affected as well. In this case, Deutsche Bahn had to deal with it, since they are running these trains.

After midnight, the Berlin Police Department announced the bomb had been defused. Everyone was allowed to return home.

At the end of World War II, the Allies bombarded Nazi Germany from above. A total of 310 bombing raids, during which more than 45,000 bombs were dropped by the U.S. Air Force and Britain’s Royal Air Force, targeted Berlin. Thousands of explosives did not go off. On a regular basis, they are being found on construction sites.