Berlin: Big Protest Against Russia’s War in Ukraine to Take Place on Sunday 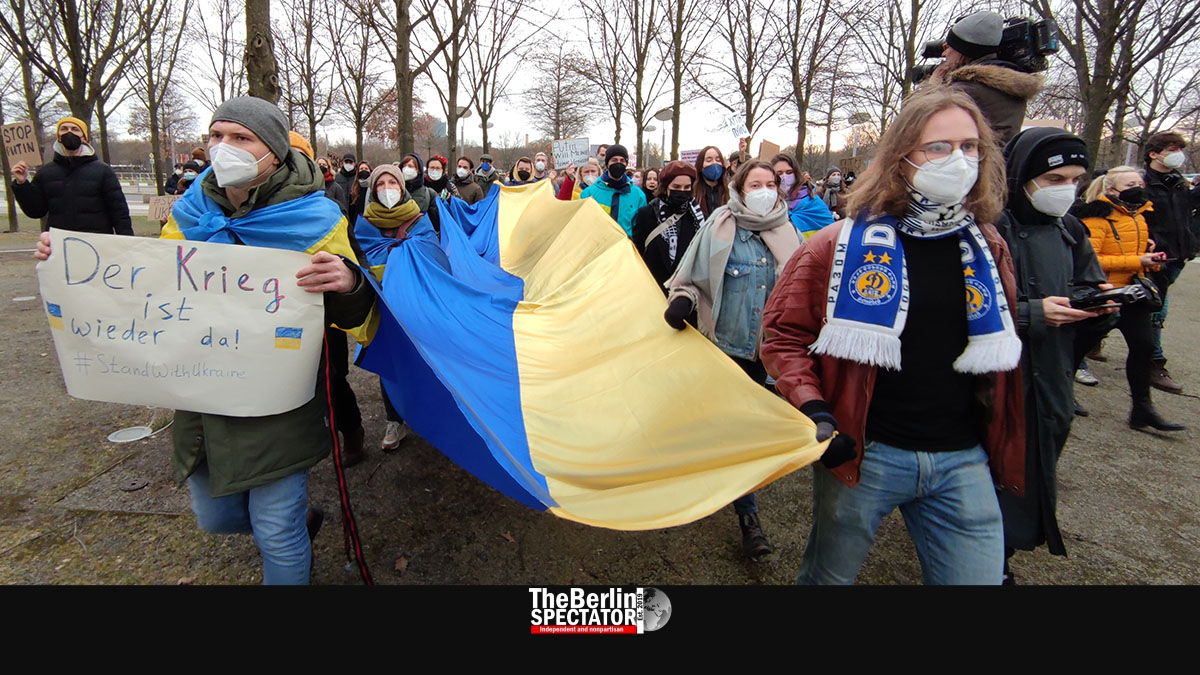 In Berlin, an alliance consisting of numerous organizations announced a rally against President Putin’s war of aggression in Ukraine. The protest was registered for 20,000 people. Smaller demonstrations take place every day.

Berlin, February 26th, 2022 (The Berlin Spectator) — Every day, people protest against Putin’s war in Berlin, including on Friday, when thousands sang songs for peace at Brandenburg Gate. The State Music Council had invited members of choirs and other musicians to join in. Hundreds of participants sang ‘Where Have All the Flowers Gone’ and other fitting songs.

All day long, Berliners of Ukrainian origin, but also Germans and even Russians protested against the war in front of the Russian Embassy at Unter den Linden, one of Berlin’s most famous boulevards. On Friday afternoon, hundreds rallied against the Russian attack on Ukraine in front of the chancellery again. It’s inhabitant, Chancellor Olaf Scholz, is on their side. He, Foreign Minister Annalena Baerbock, Health Minister Karl Lauterbach and Germany’s President Frank Walter Steinmeier have condemned the war in the strongest terms.

This weekend, a large demonstration is supposed to take place on Strasse des 17. Juni, between Brandenburg Gate and the Victory Column. It is scheduled to commence on Sunday at 1:00 p.m.. ‘Stop the War. Peace for Ukraine and all of Europe’ is the event’s motto. A human chain was supposed to be formed at the event. This part was called off though because of the ongoing Corona pandemic. But the rally itself will take place.

The German Federation of Trade Unions is among the organizers. So are the Verdi union, environmental groups, Christian organizations and left-wing initiatives. “A war is going on in our neighborhood”, a mutual statement said. “We call on the Russian government to cease all attacks immediately, to leave Ukraine and to restore its territorial integrity.” Putin was waging his war against Europe as well, against Germany’s democracy and the liberal system of values, the organizers stated.

Sunday’s big demonstration was registered for 20,000 people. Also because the weather will be nice and sunny, according to forecasters, even more people could take part. A smaller protest entitled ‘Russians do not want war’ is scheduled to take place on Sunday at 3:30 p.m. in front of the Russian Embassy in Berlin. This event also is a commemoration for Boris Nemtsov who was murdered in Moscow exactly seven years earlier, to the day, after he had organized a protest against Russia’s war in Ukraine.

Today, on Saturday, a smaller protest against Russia’s war was announced at 2:00 p.m. at Brandenburg Gate. More spontaneous demonstrations with the same message will like take place as well.