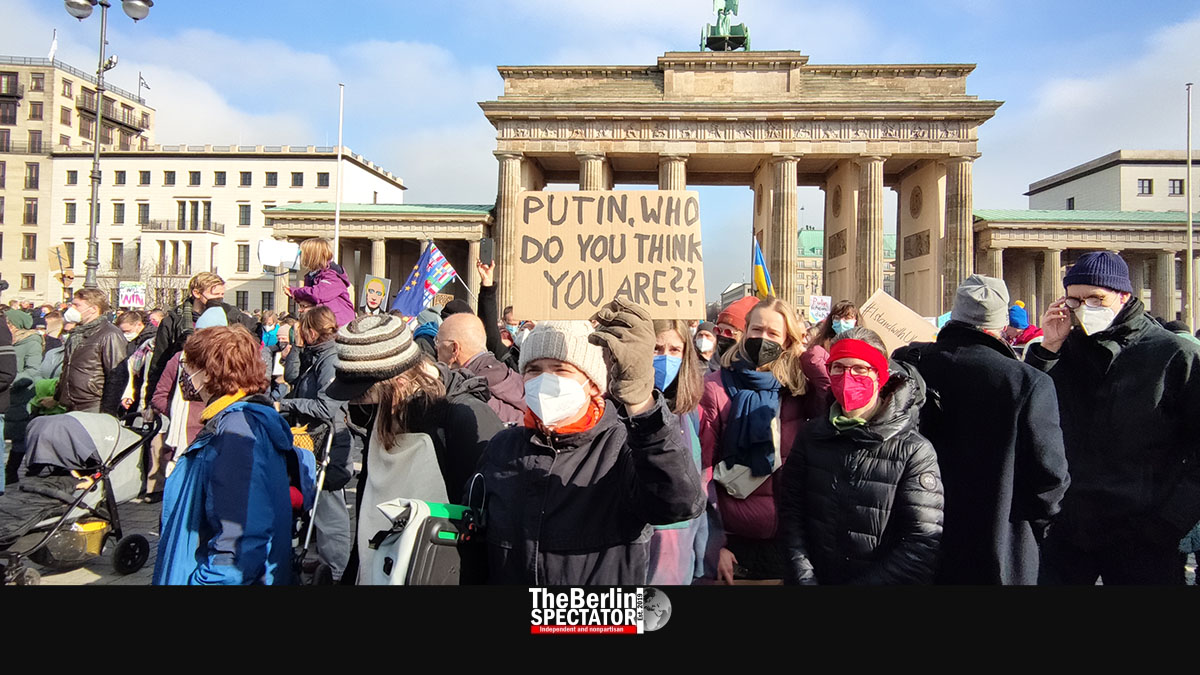 In Berlin, this was the largest demonstration in a long time. Huge crowds demanded an end to Russia’s war in Ukraine. It felt like the entire city was on its feet.

Berlin, February 27th, 2022 (The Berlin Spectator) — According to the organizers of today’s protest against Russia’s war, half a million participants were there. The Berlin Police department mentioned “a low six-digit figure”. No matter what exactly the number might have been, it is safe to say that a whole lot of people joined the rally.

All Over the City Center

The event was supposed to take place on ‘Strasse des 17. Juni’, between Brandenburg Gate and the Victory Column. But when it was already taking place, more and more Berliners walked towards the location. While they did, they already protested. In fact, the rally covered the better part of Berlin’s eastern city center. At 2:15 p.m. CET, 75 minutes after the rally officially commenced, thousands were still in front of Red City Hall, and even more on ‘Unter den Linden’ boulevard.

Countless cyclists, families, couples and groups of friends were part of it. They spoke Ukrainian, English, Spanish, German and other languages. When the masses tried to walk by the Russian embassy, they were slowed down. The police had closed part of the boulevard in front of it, obviously for safety reasons, which was why it was hard to get through.

Once people reached Brandenburg Gate, the space behind it, on its Western side, was full already. Many of those who chose to go by ‘U-Bahn’ train had to walk more than they anticipated because the police were forced to shut down ‘Brandenburg Gate’ station when it got overcrowded. Letting more people in would have been dangerous.

Hundreds of officers were present at the protest, but they knew in advance this would be a peaceful crowd. What they did not know was that there would be many more than the 20,000 protesters the organizers had registered.

At the rally, Annette Kurschus, the chairlady of the Council of Lutheran Churches in Germany (EKD) was among the speakers. She said Russia’s attack on Ukraine was a crime. Now was the time to stand by the side of the people of Ukraine and of Russia. For the Verdi union, its chairman Frank Werneke stated the demonstration was “a strong signal of solidarity with Ukraine”. Peace in Europe needed to be restored.

Many of the hundreds of thousands of participants held signs. Some of them were creative. On some of the signs, the word ‘peace’ could be read in many languages, including in Russian. Apart from the popular “No war!” sign, there were those that said “Stand with democracy!”, “Putin, who do you think you are?”, “Send arms, not prayers!” or “Putin go f… yourself!”.

Many participants followed the rules which included wearing protective masks. The distance part was not really followed since there were too many people.