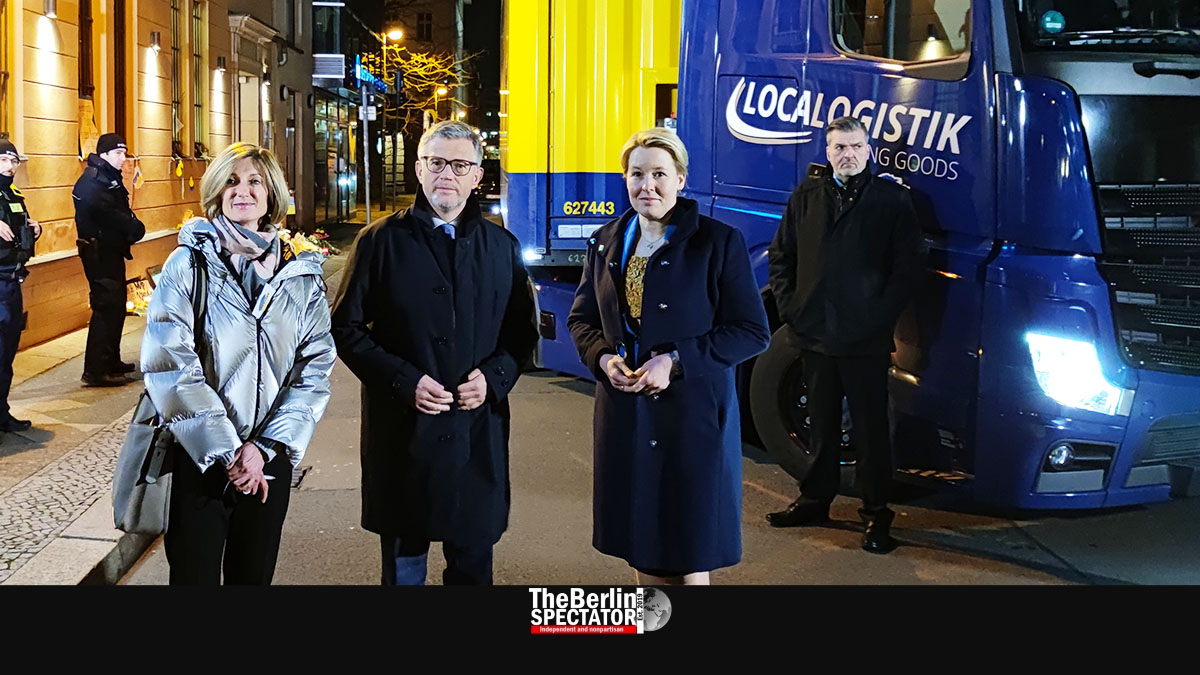 On Monday, the Ukrainian Ambassador in Germany asked Governing Mayor Franziska Giffey for medication and material for hospitals in his country. A day later, a big shipment was on its way.

Berlin, March 2nd, 2022 (The Berlin Spectator) — According to Andriy Melnyk, the Ukrainian Ambassador to Germany, hundreds of Ukrainians have been killed in Russia’s war of aggression against his country, and thousands have been injured. For this reason, Ukrainian hospitals badly need supplies. This is what he requested in an e-mail to Berlin’s Governing Mayor Franziska Giffey.

Melnyk’s message arrived in Mrs. Giffey’s inbox on Monday. She talked to Vivantes, the state-owned healthcare company that runs several hospitals. On Tuesday night, its spokesman Christoph Lang told The Berlin Spectator, a truck full of supplies had been prepared. On 30 pallets, bandages, protective masks, doctor’s white coats, disinfection fluid, infusion bottles, other kinds of supplies and medication had been put together.

The material was part of Germany’s national reserve for emergencies. More was already ordered, meaning the supplies that are going to Ukraine will be replaced quickly. The delivery for Ukraine was collected at a warehouse in Berlin’s Spandau borough, before it was picked up big a big truck on Tuesday. At the Ukrainian Embassy, Franziska Giffey, Andríy Melnyk and Vivantes’ human resources manager Dorothea Schmidt saw off the truck late last night.

In front of the Embassy, the Governing Mayor said the Ambassador had updated her on the situation in Ukraine. In return, she had informed him about Berlin’s activities. For instance, the Senate just set up a crisis committee. Its task is to help Ukrainian refugees in Berlin. More accommodations were being sought, Mrs. Giffey stated, because more and more war refugees were arriving. For now, Berlin is preparing for 20,000 of them.

Ambassador Melnyk said, he was thankful for the solidarity with his people. He said he expected Ukrainian cities to be besieged by the Russian troops. For that reason, more people would have to flee their country. Terrible video footage from Kiev, Kharkiv and other cities had been broadcast today. The Ambassador also said the Ukrainian people would never forget the help that was provided now.

For Vivantes, Dorothea Schmidt said it was important to help in this situation. When the aid request had come in, her company had checked what it could provide. There were enough supplies to send off a second truckload soon. The driver of the truck told The Berlin Spectator, he would go straight to a logistics center in eastern Poland. From there, Ukraine was going to organize the transport across its border and to hospitals in need.

In front of the Ukrainian Embassy, Berliners have placed flowers and candles on the street to commemorate the victims of Russia’s brutal war and to show solidarity. Signs that call for peace were added as well.