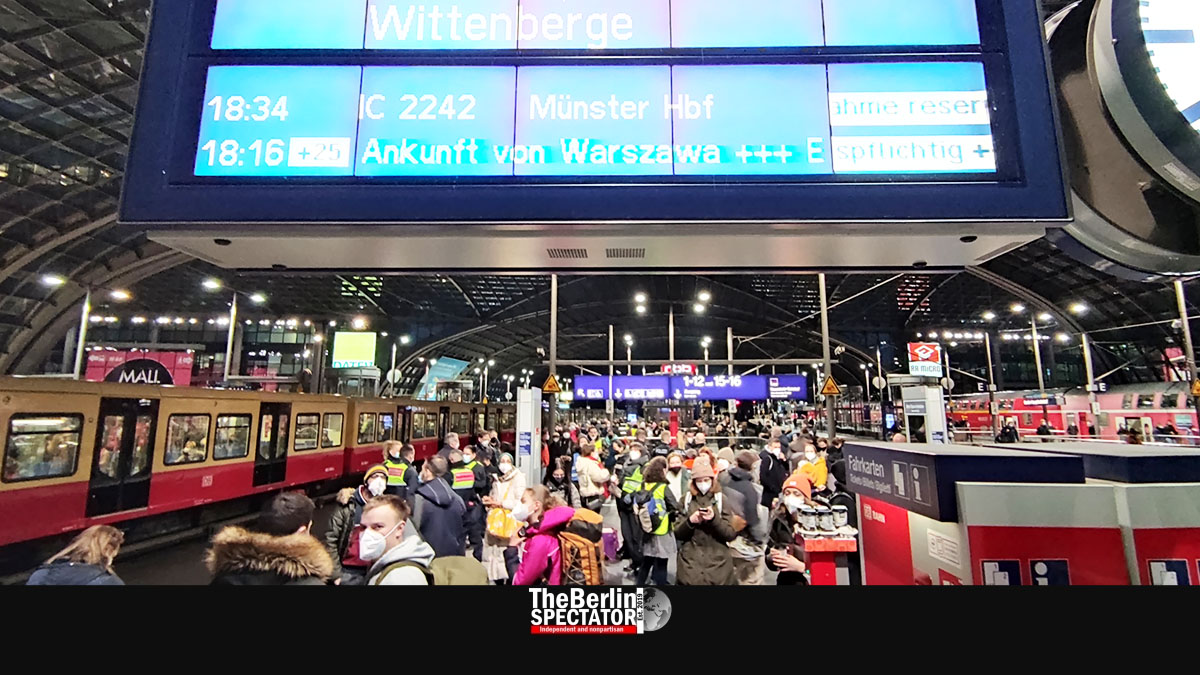 Several trains with hundreds of war refugees from Ukraine arrived in Berlin on Wednesday night. At Central Station, countless volunteers and the police welcomed them. Berlin’s finest were at work here.

Berlin, March 3rd, 2022 (The Berlin Spectator) — Yellow vests used to have a negative connotation because of what was going on in France some years ago. Not anymore, at least not in Berlin. Today’s yellow vests are volunteers at the German capital’s Central Station. On Wednesday evening, they helped more than 1,000 Ukrainians, mostly women and children, who fled the Russian war against their country. Many expatriates of African origin who got out of Ukraine as well travelled with them.

At 6:20 p.m., two trains from Poland, one from Warsaw and the other one from the eastern part of the country, with several hundred refugees each, were approaching Berlin, both of them with big delays. While they came closer and closer, some 40 yellow vests were gathering at the stairs to platform 14. Julia, a young Canadian from Edmonton, explained things to them.

There would be Ukrainian refugees who intended to travel to other German cities or other Western European countries, she said. While they needed to be guided to a specific ticket counter, the others would be given the information they needed, along with snacks, beverages and hygiene articles, before they would be taken to Berlin’s refugee accommodations.

At the same moment, four Jehovah’s Witnesses were getting ready to pick up Ukrainian members on platform 14, while dozens of volunteers got into position up there too. Their task was to welcome the refugees and show them the way. All helpers had little stickers on their vests, with abbreviations for the languages they speak. It was a very international bunch that included Ukrainians, Russians, Germans, one Spaniard and one Frenchman.

Carola Seiler was waiting on Platform 14 as well. She knew two trains full of Ukrainian war refugees would arrive up there within 20 minutes. The big sign she was holding said “Mother + baby + child until April 16th”, and the abbreviations for the three languages she speaks, German, English and French. Mrs. Seiler was one of many Berliners who wanted to help by accommodating refugees in her home. On a lower level of this giant train station, more families, couples and flat mates offered beds too.

At some point, the train from Warsaw finally arrived. Some of the women who got off seemed to be worried, probably about their families back home in the war. Also they did not know what to expect at first. But then, they heard welcome messages in Ukrainian and Russian. When they saw all of those volunteers, some of them looked relieved. It is hard to imagine what kind of ordeal they must have gone through before and during their trip.

It took some 10 minutes until all refugees had been guided to where they were supposed to be. Those who intended to stay in Berlin and did not know anyone in the city stood in line for snacks, toys, clothes and other items that were provided. It did not take long until the second train from Poland arrived on platform 14, with even more war refugees. Once its doors opened, Central Station was crammed indeed.

Police officers helped people get off the train, by taking their little children and suitcases out of there. Once they were on the platform, the mostly young volunteers took over. All of them were very friendly and obviously eager to help. Berlin’s finest were at work here. And they were needed. A total of five trains from Poland arrived on Wednesday, the last one late last night.

According to Berlin’s Senator of Social Affairs, Katja Kipping, the number of arriving Ukrainians has been soaring in the past few days. On Monday, 350 war refugees arrived. On Tuesday, there were 1,400, and yesterday, the number definitely was a lot higher, again.

From Central Station, those who wanted to stay in Berlin were taken to refugee hostels in several boroughs, including Buch, Friedrichshain, Neukölln, Reinickendorf and Spandau, in shuttle buses. Ukrainian war refugees do not have to pay for their trips on Deutsche Bahn’s long-distance trains or for Berlin’s public transport. They can also visit all public baths in the city for free. Governing Mayor Franziska Giffey is expecting 20,000 refugees to arrive in Berlin, for now. This number may be reached rather soon. According to the RBB radio and TV network, Berlin already asked neighboring Brandenburg to accept some of the refugees who arrive in the capital.