Berlin: Just Another Day at the Train Station 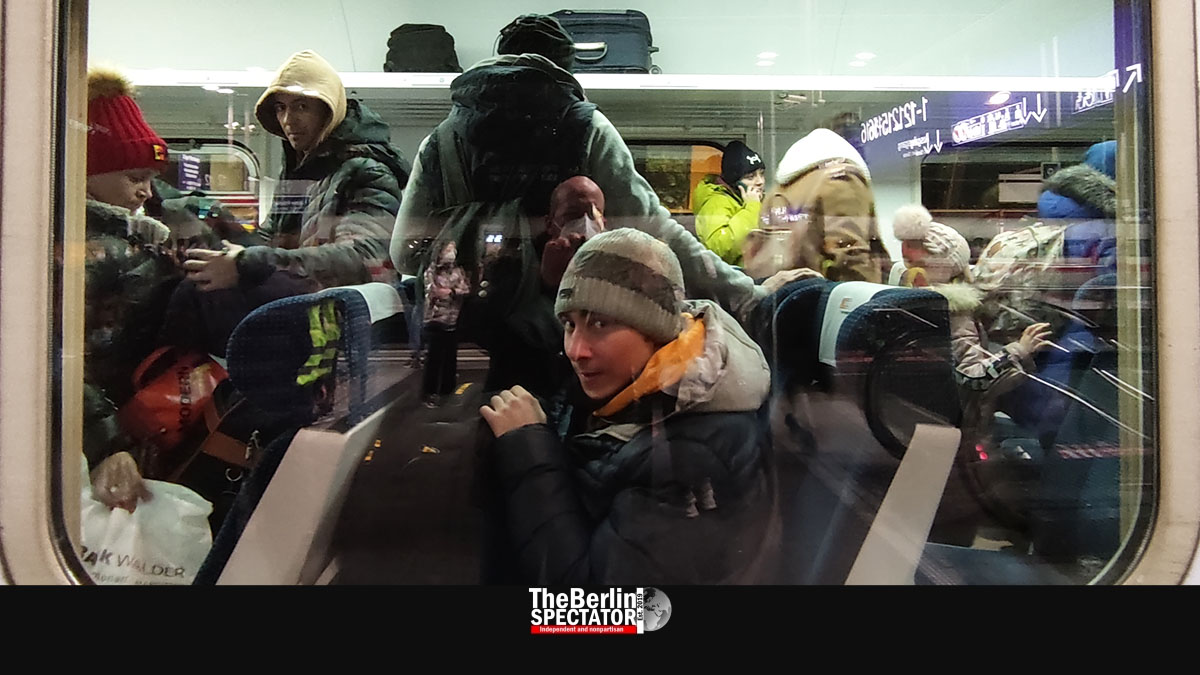 Berlin’s Central Station is the gate to Western Europe. That is why thousands of war refugees from Ukraine arrive here every day. Without those hundreds of volunteers and their efforts, there would have been a big mess.

Berlin, March 5th, 2022 (The Berlin Spectator) — Berlin will not be able to cope with the influx from Ukraine on its own for much longer if it continues the way it started on Monday. Almost 20,000 have already come, 3,000 of them have been accommodated in Berlin. Most refugees arrive at Central Station, which is the gate to Western Europe, from the perspective of Ukraine.

Not all refugees are Ukrainians. Many citizens of African states who studied or worked in Kiev are among them, people like Lookman Rahman from Nigeria. His smart phone contains two video clips of a Russian attack on an industrial area in the Ukrainian capital. He filmed the footage himself. A big explosion can be seen in those clips, and a giant cloud of smoke. To Rahman, getting out of there was the only option.

So, he and his family packed up their most important things and left. At the train station in Kiev they were separated. His family was allowed to board a westbound train, he was not. Because Lookman Rahman is not a Ukrainian citizen, the Ukrainian Army could not make him fight, meaning there was no reason for keeping him back. They did anyway. “I think it was racism”, he told The Berlin Spectator. On Friday morning, he did not know where his family was. He intended to take a rest in Berlin, call them on the phone, and join them wherever they are.

Hundreds of Africans were among the thousands of refugees who were welcomed in Berlin on Friday. Many of them are from French-speaking countries and have ties to Paris or other French cities. This led to an issue. The seats on all of Deutsche Bahn’s (DB) trains to the French capital that leave Berlin in the next two days are sold out. A young German volunteer in a yellow vest said she had approached one of DB’s high-ranking managers who had come to check the situation at Central Station and explained the problem to him.

A few hours later, DB organized long-distance buses for the trip to Paris. It did not take long until the next issue arose: Dozens of African men were not allowed to enter those coaches. Deutsche Bahn insisted the first ones were for women and children only. Some affected refugees had to wait for up to twelve hours until they were finally allowed to board one of those buses to Paris.

All trains that arrived in Berlin from the border between Ukraine and Poland, or from the Polish-German border, were delayed, some by more than two hours. According to the announcements at Central Station, this had to do with “police activity” or “delays abroad”. Whenever one arrived, the many volunteers on site were prepared. Benny from El Salvador was one of them. “I just wanted to see what was going on here after I dropped off my child at the kindergarten, but ended up becoming a volunteer”, he explains.

He was one of those who took position on the first floor of the giant station. Benny’s task was to guide the refugees to the basement, where free snacks, beverages, clothing, shoes and hygiene articles were available. Down here, some 50 Berliners gathered and offered to accommodate refugees in their homes. Whenever someone voiced interest in staying with Berliners, a volunteer made an announcement through a megaphone. That way, Berliners who wanted to help were put in touch with those in need.

Upstairs, on platform 14, a train from Poland arrived every two hours, on average. When their doors opened, overzealous security guards employed by Deutsche Bahn ordered volunteers, the ones who did most of the work, to stay back. The guards, some of whom looked rather scary with their military hair cuts and none of whom spoke the required languages, wanted to be the first ones to come in contact with the refugees from Ukraine.

Many of the volunteers were Ukrainians and Russians who live in Berlin. The Russian a German lady spoke sounded very fluent too. She said she was an interpreter. The helpers who were at Central Station on Friday, approximately 200 of them, were connected to a Telegram channel which contained the arrival times and frequent updates on all of those the delays.

Just below platform 14, at a ticket office, refugees who wanted to continue to other destinations stood in line. The tickets were given to them for free. Downstairs, in the basement, between all of those stands with free sandwiches and soda, the German Red Cross set up a tent earlier this week. Nico Schönemann, the director of operations down there, told our reporter the doctors and medics there had treated persons with injured or swollen feet quite a lot, because of long distances they had to walk when they left Ukraine.

Exhaustion was dealt with too. Some refugees complained about soar throats and headaches. A few suspected Corona cases had come to the Red Cross tent, Schönemann stated. In the evening, even more doctors and medics were busy treating patients.

Not all war refugees who arrived at Berlin’s Central Station on Friday were humans. Quite a few dogs were spotted. One couple came with their dog Brenzi, a real cutie, and a cat in a cage. They were going to stay the night in Berlin and continue on towards Barcelona on Saturday, where they have relatives.

Eight Kilometers (5 miles) away, further west, at Berlin’s long-distance bus terminal, some 40 volunteers were busy at about 1:00 p.m.. Some of them prepared sandwiches, others were on the lookout for buses from Poland, but most of these helpers just waited. They said 21 buses with refugees from Ukraine were supposed to arrive at some point during the day, but nobody knew when exactly they would get there. The ‘Malteser Hilfsdienst’, an emergency service similar to the Red Cross, has two large tents at the bus terminal. They help refugees with medical issues and provide food as well.

Berlin’s Governing Mayor Franziska now wants the federal government to help the city deal with all the refugees. Neighboring Brandenburg has already agreed to accommodate some of them because Berlin’s refugee accommodations are filling up quickly. The Senate is already looking into renting entire hotels for people who arrive from Ukraine.

Berlin would not be able to cope with this challenge without the volunteers. Some have criticized the fact that hardly any officials had shown up at Central Station. But Franziska Giffey and her Senator for Social Affairs, Katja Kipping, did go there on Thursday. On the RBB TV and radio network, Mrs. Giffey defended the city state. Everyone was doing their part, including Berlin, she stated. This was a big challenge.

On Friday, 120 Jewish orphans from Odessa arrived in Berlin as well, on two buses. The trip took longer than two days. The kids and their attendants were accommodated by the Jewish organization Chabad Berlin. Israel’s Ambassador to Germany Jeremy Issacharoff welcomed them.