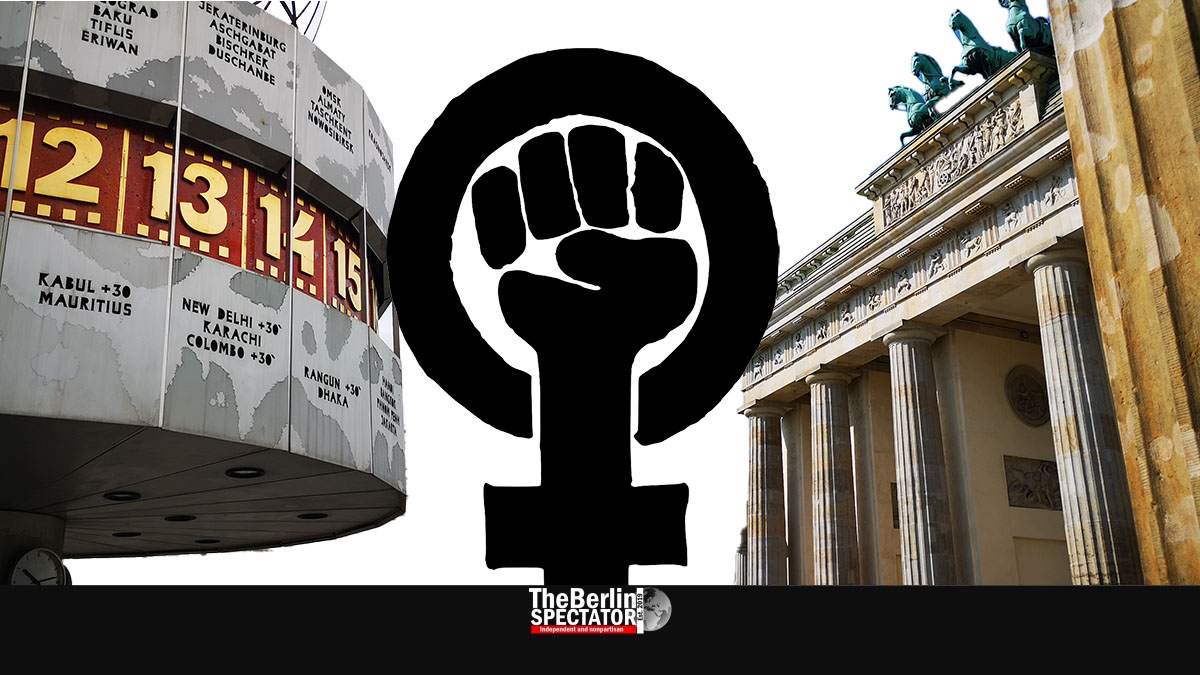 In Germany, Berlin is the only federal state that made International Women’s Day an official holiday. Berlin’s first female Governing Mayor Franziska Giffey will spend the day with a female ‘U-Bahn’ train driver and check the share of women in the police.

Berlin, March 6th, 2020. Update: March 5th, 2022 (The Berlin Spectator) — Celebrating the feminist movement’s achievements of the past century is one of the purposes of International Women’s Day on March 8th, which was turned into an official holiday in the city state of Berlin in 2019. But the fight for equality is not over. Making people aware of this fact is the second purpose of the holiday.

It was Clara Zetkin, a German socialist and feminist, who spoke about the idea of establishing an International Women’s Day at the Second International Socialist Women’s Conference which took place in Copenhagen in the summer of 1910. The original idea came from the United States of America though, where socialist women had already decided to have such a day.

Back then, it was mainly about women’s suffrage. Today, it depends. In Germany, feminists, both female and male ones, still criticize the fact that, in many companies, women earn less than men for the same work. And the critics do have a point.

Also the double or even triple burden many women carry continues to be a relevant subject. Men work. Then they come home and watch soccer matches. Many women, on the other hand, come home from work in order to keep on working. They deal with the kids and the household before they watch Netflix for five minutes while falling asleep after a tiring day, a far busier one than their husbands had.

While these may be the main issues in Europe, International Women’s Day is also about solidarity with women in other parts of the world, where they have far less rights, if any, or where the injustice is far more grave. Violence against women, for instance in parts of Africa, where female genital mutilation is just one of many severe problems, is another aspect.

As a matter of fact, adopting this new holiday was not entirely about women or the injustice they are facing, but also about having a new holiday. Germany’s other federal states, especially in the more religious south of the country, have far more holidays. Bavaria has 13 while Berlin had 9 before it got the new one.

Franziska Giffey is the first female Governing Mayor of Berlin who was elected. Louise Schröder held the job provisionally from 1947 to 1948, without being elected. For Mrs. Giffey, a new sign was installed next to the main entrance of Red City Hall. It says ‘Die Regierende Bürgermeisterin von Berlin‘. In German, the female form of the word ‘Mayor’ has two additional letters, the ‘i’ and the ‘n’ at the end. They probably put the male version in storage, in case it is needed again at some point.

Governing Mayor Franziska Giffey will spend International Women’s Day in the city. To be precise: She will be down there in Berlin’s dark ‘U-Bahn’ tunnels with train driver Claudia O’Sullivan and Eva Kreienkamp, the CEO of the state-owned company. Afterwards, she intends to join a patrol that includes police officers and security guards employed by Berlin’s main public transport provider BVG. According to Red City Hall, the focus of Mrs. Giffey’s activities on the holiday on Tuesday is on professions dominated by men.

Of course, a federal state does not need an official holiday in order to mark International Women’s Day. In Hamburg, Equality Senator Katharina Fegebank is scheduled to discuss “equal care and the challenges for sustainable feminism” with guests. She will also talk to Tatyana Martynova, a teacher from Odessa, via video chat. This will be about the situation of women in Ukraine during Russia’s war of aggression.

We have a favor to ask: As of March 6th, 2022, twelve readers are supporting The Berlin Spectator on a monthly basis. We appreciate everybody’s help a lot. Thank you so much! You know who you are.
But, The Berlin Spectator needs more supporters. Right now, we receive a low three-digit amount per month. The first digit is a 1. In order to make this a more stable project, the amount would have to be quintupled, at least.
This is the obvious question to you: Would you consider supporting The Berlin Spectator?
Even small donations help. You can choose between one-time contributions and monthly ones. And you have the choice between Paypal and Patreon. You can check out our Donations Page first. Thank you.

Berlin: Just Another Day at the Train Station