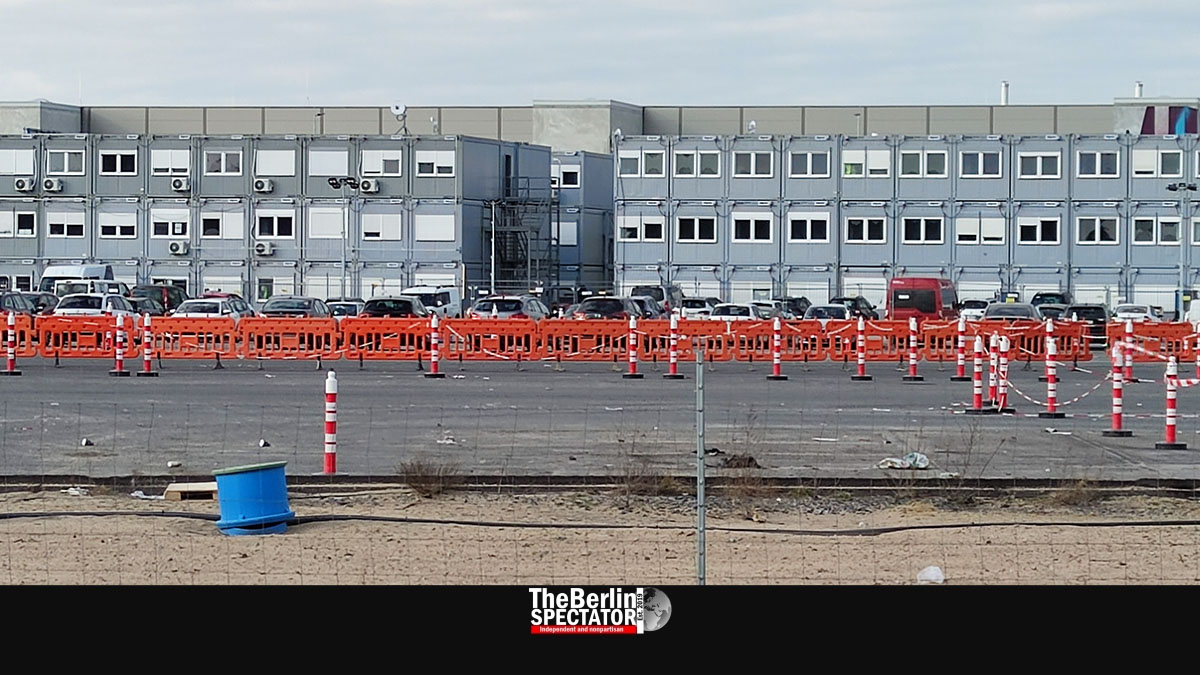 Less than three years ago, in 2019, Elon Musk announced Tesla would build a ‘Gigafactory’ in Brandenburg province. Exactly 843 days later, part of the factory was ready to rumble. Then, a new problem arose. Will Musk have to hit the brakes again?

Berlin, March 6th, 2022 (The Berlin Spectator) — In Germany, approval procedures can take a decade because, when it comes to big projects like factories, many hurdles have to be taken. In Berlin and elsewhere in Germany, politicians keep on stating those procedures needed to be sped up and what not.

When your name is Elon Musk and you intend to implement a major industrial project, the Germans will help you. Brandenburg’s state government wants Tesla so much, it even set up a Tesla taskforce. Its sole purpose is to guide the American electric vehicles manufacturer through the confusing jungle of German laws and regulations, and to accelerate the whole thing. Those efforts were successful, at least in part.

In early 2019, a tree plantation was removed from the premises Tesla purchased at the Freienbrink industrial park just outside Berlin. At its own risk, Musk’s company started erecting the ‘Gigafactory’ while environmentalists staged protests against the auto giant. In the summer of 2021, Musk had wanted to commence manufacturing Teslas with the ‘Made in Germany’ label, but Corona and those German regulations slowed him down.

Then, on Friday, March 4th, 2022, the authorities in Brandenburg finally approved the project by sending a permit to Tesla. The document reportedly has 536 pages and contains a long list of requirements the company has to fulfill. Once it does, the final operating license will be issued. Of course, this was good news. Tesla announced they would get it done within two weeks. This would have meant they could have started producing those ‘Berlin Model Ys’ at the end of this month. Some 2,000 vehicles were already made during test runs.

Both Tesla and the Brandenburgers were glad they finally had come this far. “Brandenburg is the federal state of climate-neutral mobility”, Governor Dietmar Woidke stated, 843 days after the project in his state was announced by Elon Musk. The ‘Gigafactory’ was Germany’s first big industrial project that combined carbon neutrality with the creation of jobs, he said. For a few hours, everything looked fine.

Then, late on Friday night, The Administrative Court in Frankfurt (Oder), Germany’s smaller Frankfurt located at the Polish border, found a procedural error which has implications. When Brandenburg’s Environment Agency issued a permit for the delivery of millions of tons of additional water for the factory, it forgot to involve the public which had the right to comment on the decision. This process will have to be made up for. Obviously, both the inhabitants in the area and Tesla need water. The factory will use 1.4 million cubic meters (50 million cubic feet) of it per year.

Now, the court decision could cause another big delay. In theory, it could jeopardize the entire project. For now, Brandenburg has the option to suspend the implementation of the court decision until the matter is resolved. That way, a long delay could be prevented, at least in part. What all of this means is that nobody really knows when the official production will actually commence.

We have a favor to ask: As of March 6th, 2022, twelve readers are supporting The Berlin Spectator on a monthly basis. We appreciate everybody’s help a lot. Thank you so much! You know who you are.
But, The Berlin Spectator needs more supporters. Right now, we receive a low three-digit amount per month. The first digit is a 1. In order to make this a more stable project, the amount would have to be quintupled, at least.
This is the obvious question to you: Would you consider supporting The Berlin Spectator?
Even small donations help. You can choose between one-time contributions and monthly ones. And you have the choice between Paypal and Patreon. You can check out our Donations Page first. Thank you.