Germany: A Weekend that was All About Ukraine 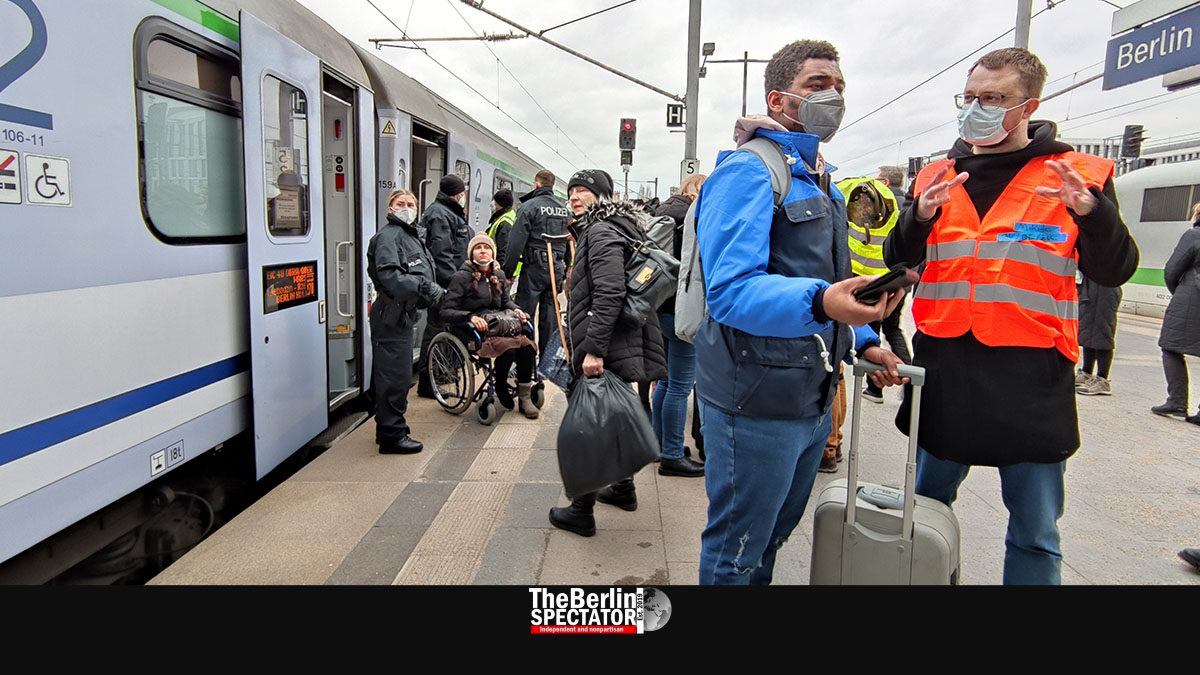 Thousands of Ukrainian war refugees arrived in Berlin this past weekend. So did Israel’s Prime Minister Naftali Bennett who discussed Vladimir Putin’s war with Chancellor Olaf Scholz. More protests against the attack on Ukraine took place in Berlin and Hamburg.

Berlin, March 7th, 2022 (The Berlin Spectator) — Germany has two Frankfurts. The smaller one is located right at the German-Polish border in Brandenburg. At its rather small central station, dozens of Federal Police Officers were on duty all weekend long. Their task was to check the thousands of passengers on all trains that came in from the Polish-Ukrainian border and Warsaw before they got to Berlin.

Hardly any refugees stay Frankfurt. Some change into shuttle trains from there to Berlin. That is why only three volunteers were present on platform 10 on Saturday. A young Polish lady who has been living on the German side of the Oder river for a decade said some of the Ukrainian refugees had questions that needed to be answered. Other than that, there did not seem to be too much work for helpers in Frankfurt. In the tent the Red Cross set up in front of the station, only tiny medical issues had been treated, a representative told The Berlin Spectator on site.

Some 100 kilometers further west, things looked very different. At Berlin Central Station, more and more Ukrainian refugees came in and got off those trains all the time, almost 24 hours per day. On Sunday at 2:55 p.m., a delayed train from Warsaw arrived on platform 14. The Polish locomotive engineer stopped far too early. As a result, getting off the train was complicated for passengers in the last four rail carriages which had not been pulled to the platform.

Dozens of helpers in yellow vests and Federal Police officers ran towards the train. When they got to the end of the rather long platform, mostly women, children and elderly people were already disembarking with their luggage. A woman and her teenaged children held each other right there and took the first selfie in Berlin. A few steps away, three policemen helped a woman in a wheelchair.

Most Ukrainian refugees who arrive in Berlin, and people of other nationalities who lived in Ukraine until they fled because of Russia’s war, were guided to the station’s basement where they got snacks, drinks, medical help and accommodations offered by Berliners. On Sunday afternoon, about fifty of them were there. So were the police, because there is a problem.

While most people who offer to accommodate refugees have honorable intentions, there are exceptions. Officers approached single men in the crowd and talked to them in order to prevent attempted sexual exploitation of refugees or similar disgusting behavior. On a regular basis, those hundreds of volunteers at the giant station were told to keep their eyes open in this regard, in messages they received via Telegram. But private accommodations for refugees are needed. At some point late on Saturday night, a hundred Ukrainians were at the station, but nobody was there to offer them beds to sleep in. During the day, the situation is a lot better.

Between countless stands at which helpers offered water, snacks, clothing and hygiene articles to the refugees, a lady in charge told The Berlin Spectator there were too many volunteers during the day, but not enough late at night and early in the morning. From about 11:00 p.m. and from 7:00 a.m., helpers who speak English, or ideally Russian or Ukrainian, were needed. But anyone who intended to join needed to talk to the volunteers in orange vests first. They set up their makeshift-HQ, consisting of a few tables, close to the McDonald’s restaurant in the basement of Berlin Central Station.

One of the many helpers upstairs, on platform 14, was a young lady born in Kharkiv who is a Berliner by now because she has lived in the German capital for so long. While she was waiting for the next train with refugees from Ukraine in order to help them, she was busy communicating with her own grandparents in Kharkiv via Viber. They were trying to come to Germany too, because of Russia’s attacks.

“The problem is that people who were supposed to get them out of the city took the payment for this service but never showed up again.” The volunteer said her uncle had paid those criminals. Now, they were trying to find another opportunity to get to Poland. She was hoping to welcome her grandparents on the platform she was standing on, at Berlin Central Station, as soon as possible.

In walking distance from Central Station, at the chancellery, two men discussed the situation in Ukraine a few hours earlier, on Saturday in the late evening hours. That was when Israel’s Prime Minister Naftali Bennett arrived directly from Moscow, where he had discussed a ceasefire and the situation of the Jewish community in Ukraine with Russia’s President Putin. Israel will be sending a mobile hospital there next week. It is unclear whether the Moscow talks led to any breakthrough. Neither the Israeli government nor the German one volunteered information after Chancellor Olaf Scholz had discussed things with his Israeli colleague whom he had also met a few days earlier, in Jerusalem.

Another few steps down the street, at Brandenburg Gate, Bosnians from the free part of their country protested against the attempts of Serbian separatists in the town of Pale to turn their area into a ‘Republika Srpska’ (‘Serb Republic’). This happened on Sunday afternoon. On a podium behind Brandenburg Gate, a speaker said the war in Ukraine had commenced this way. A dictator had supported separatists there too. The Bosnian protesters in Berlin expressed their solidarity with the Ukrainian people.

Two larger protests against the Russian war took place yet another few steps away, in front of the Russian Embassy in Berlin, and at Bebelplatz square. In both cases, Ukrainians, Germans and protesters of other nationalities demanded an end to Putin’s war and more sanctions against Russia. The largest protest of this kind took place on February 27th, 2022. Hundreds of thousands of people took part.

Some 280 kilometers (174 miles) north-west of Berlin, in Hamburg, tens of thousands of people participated in a rally against the war. First Mayor Peter Tschentscher was part of the demonstration. Youth organizations, unions and the Ukrainian community in Hamburg had called on people to join the event.

Just like the protesters and volunteers, the German government was busy on Sunday. It heard Governing Mayor Franziska Giffey’s calls for help. Berlin will not be able to cope with the growing number of refugees on its own much longer. That is why the Ministry of the Interior hired buses to take Ukrainians and other war refugees from Berlin to other federal states. All states, except for Bavaria and Hamburg, are involved in the effort to accommodate everyone. But many of those buses returned to their bases because hardly anyone wanted to use the service provided.

We have a favor to ask: As of March 7th, 2022, thirteen readers are supporting The Berlin Spectator on a monthly basis. We appreciate everybody’s help a lot. Thank you so much! You know who you are.
But, The Berlin Spectator needs more supporters. Right now, we receive a low three-digit amount per month. The first digit is a 1. In order to make this a more stable project, the amount would have to be quintupled, at least.
This is the obvious question to you: Would you consider supporting The Berlin Spectator?
Even small donations help. You can choose between one-time contributions and monthly ones. And you have the choice between Paypal and Patreon. You can check out our Donations Page first. Thank you.