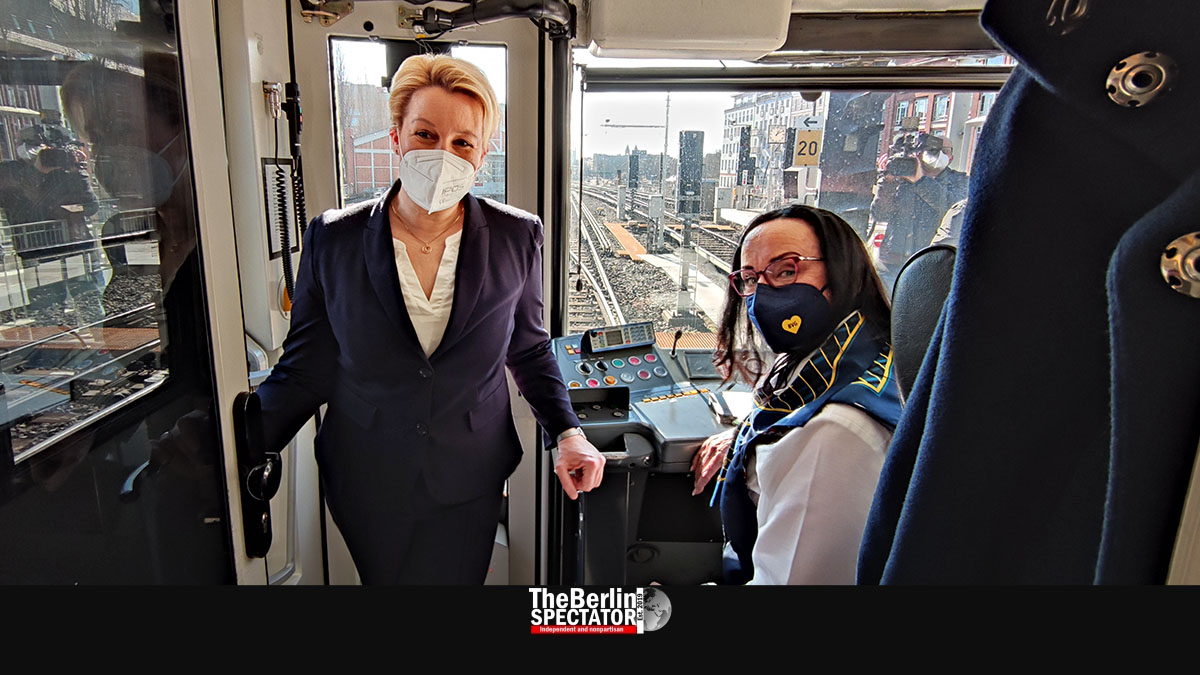 International Women’s Day is an official holiday in the city state of Berlin. Governing Mayor Franziska Giffey took the opportunity to talk to women in professions dominated by men.

Berlin, March 8th, 2022 (The Berlin Spectator) — It was sunny and a bit warmer in Berlin on Tuesday. Some flowers popped out of the soil prematurely. Even more cyclists were on the streets. So were the first bikers in leather jackets on loud Harley Davidsons. Probably because of the nice weather, Governing Mayor Franziska Giffey picked an ‘U-Bahn’ station that was part of the elevated railway on the ‘U3’ line, namely ‘Warschauer Strasse’. Who would want to be down there in a tunnel on a day like this one?

Claudia O’Sullivan was the ‘U-Bahn’ train driver she joined in the driver’s cab. The two ladies talked about being a woman in a predominantly male profession. Before Franziska Giffey Giffey arrived, Mrs. O’Sullivan told The Berlin Spectator she was a real Berliner, but since she had been married to an Irishman her last name was still Irish. She said International Women’s Day was “probably more important to women who are weaker” and had not gained acceptance in their professions yet.

Franziska Giffey sees it differently. “I am glad to be able to join women who are working on Women’s Day and to gain an insight into their everyday work”, she stated. “We need a work environment in which women can work in typical men’s professions just as well as men can work in typical women’s jobs. This is what I am working for as Governing Mayor. Women can do it all, including driving trains or being cops.” Apparently, they can be Governing Mayor as well.

‘The Most Female Senate’

After a 16-minute ride, Mrs. Giffey and her entourage got off at ‘Wittenbergplatz’ in former West Berlin’s city center. Here, she spoke to female police officers and security agents employed by Berlin’s main public transport provider BVG. The state-owned company’s CEO Eva Kreienkamp was there too. In front of the station and on the way back to ‘Warschauer Strasse’, the cops told the Mayor about their work and the situation of women on this kind of job.

Germany has come a long way, but it has not succeeded completely. “In regard to equality, Berlin is at the top in many areas”, Franziska Giffey stated. The gender pay gap was lower than in other federal states, the share of women in the corporate boards of state-owned companies in Berlin was 55 percent. “Since December, we also have the most female Senate ever”, the Governing Mayor said. There are seven female Senators and four male ones. But there was still a lot of work to do, she added.

Help and Protection for Refugees

Of course, this International Women’s Day was about Ukraine too. “My thoughts are with the women in Ukraine who are going through a lot of grief and need to flee from their country with their families”, Mrs. Giffey said. “Many of them arrive in Berlin these days. We continue to stand with them. We help them in this terrible situation and provide protection.”

Many Women’s Day rallies took place in Berlin today. Several of them were protests against Russia’s war as well. In front of the Russian Embassy, Olena Taran, a young woman from Kiev who has been a Berliner for a long time, told a crowd of protesters Russia’s war was “fought against everything that is dear to us”.

We have a favor to ask: As of March 8th, 2022, thirteen readers are supporting The Berlin Spectator on a monthly basis. We appreciate everybody’s help a lot. Thank you so much! You know who you are.
But, The Berlin Spectator needs more supporters. Right now, we receive a low three-digit amount per month. The first digit is a 1. In order to make this a more stable project, the amount would have to be quintupled, at least.
This is the obvious question to you: Would you consider supporting The Berlin Spectator?
Even small donations help. You can choose between one-time contributions and monthly ones. And you have the choice between Paypal and Patreon. You can check out our Donations Page first. Thank you.