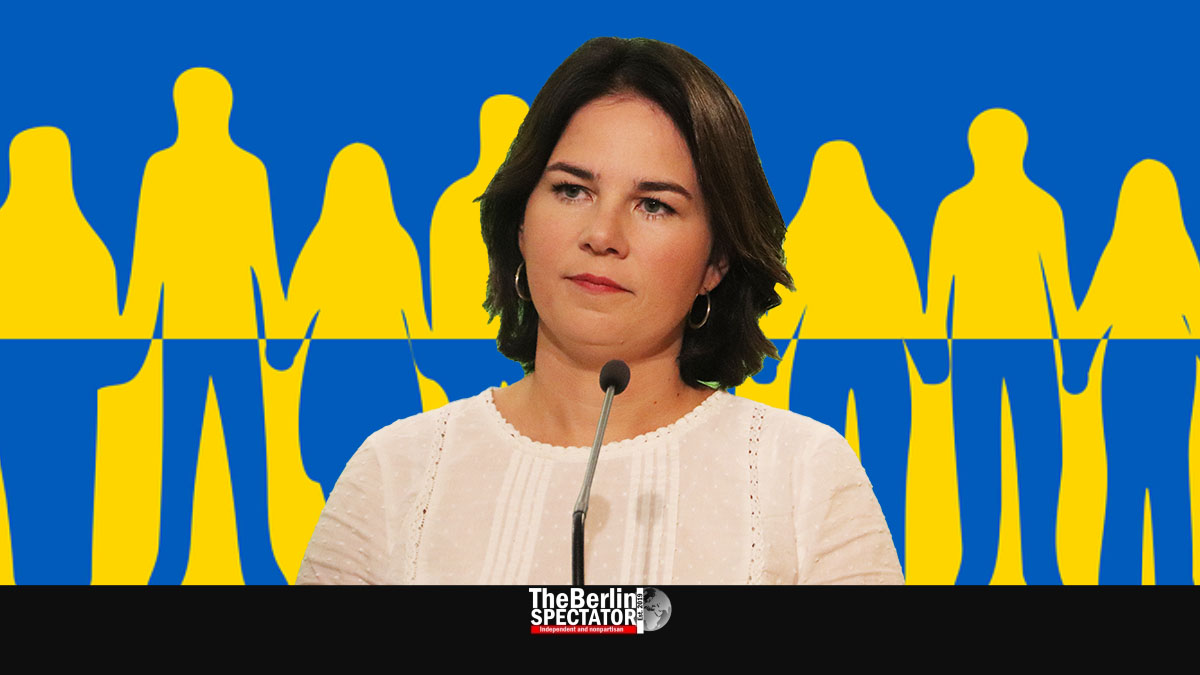 On the eve of International Women’s Day, Germany’s Foreign Minister Annalena Baerbock told the women of Ukraine Europe would stand by their side. She also had a message for Russian women. In Berlin, as many as 17 Women’s Day rallies are supposed to take place today.

Berlin, March 8th, 2022 (The Berlin Spectator) — For an event about equality, Germany’s Foreign Minister Annalena Baerbock conveyed a message to the women in Ukraine. “We see you. We stand by your side. We are doing everything in our power in the humanitarian field, and by telling President Putin to end this hideous war.”

‘This is not Your War’

Mrs. Baerbock also addressed women in Russia and Belarus: “We see you as well. This is not your war. Your sons have to fight a fight they did not choose. With a lot of acknowledgement, we look at the many women in both Russia and Belarus who protest against this unacceptable aggression”, the Foreign Minister said. “Some of you are young, some are grandmothers who have experienced war themselves. In spite of it all, you take to the streets, you risk your own freedom in order to stand up for freedom and justice. I bow to you.”

All over Germany, rallies and events were scheduled to take place on International Women’s Day. In the city state of Berlin, this day even is an official holiday, meaning few residents work and most shops are closed. As many as 17 demonstrations with subjects related to women’s rights were going to take place. In Alexanderstrasse, in front of the ‘House of Teachers’ one of those rallies was scheduled to commence at 10:00 a.m..

At 11:00 a.m. in front of the Russian Embassy, a protest entitled ‘Women and Mothers in all Countries, Unite!’ was going to begin. Obviously, this is a demonstration against Russia’s war in Ukraine and for women’s rights. More Women’s Day rallies are scheduled to take place at 11:00 a.m. at Nettelbeckplatz and Rosa-Luxemburg-Platz, two squares.

Yet another one was announced at the same hour in front of the Russian Embassy. The two rallies there might unite into one. ‘Roses for Clara’ is the motto of another demonstration at 12:00 noon at the Clara Zetkin monument. The communist activist started fighting for women’s rights in the late 19th century and initiated International Women’s Day.

On top of it all, a ‘Purple Ride Feminist Bicycle Protest’ commences at Mariannenplatz square at noon, another rally for equality at the same hour at Brandenburg Gate, and one for nurses and other female employees at the Virchow Clinic. This one is supposed to start at 12:45 p.m. at Augustenburger Platz square. There is another demonstration at Brandenburg Gate. At 1:00 p.m., the participants will look into the successes of the German women’s movement and list demands.

Even more Women’s Day events were announced for 1:00 p.m. at Brandenburg Gate (yes, it is the third one at that location), at 1:00 p.m. at Hasenheide 106 (‘Feminist Reading’) and at 1:30 p.m. at Dieffenbachstrasse 1 in Kreuzberg. At 2:00 p.m., a bicycle protest for women’s rights commences at Rosa Luxemburg Platz square. One radical protest entitled ‘Lets fight the f****ing Patriarchy!’ was announced for 2:00 p.m. at Stralauer Platz square.

Women’s Rights in Turkey and Afghanistan

Related articles:
The Berlin Perspective: ‘Happy Women’s Day. Could You Iron My Shirt?’ (column)
Berlin: The Emancipated City and its Women’s Day Holiday

We have a favor to ask: As of March 6th, 2022, thirteen readers are supporting The Berlin Spectator on a monthly basis. We appreciate everybody’s help a lot. Thank you so much! You know who you are.
But, The Berlin Spectator needs more supporters. Right now, we receive a low three-digit amount per month. The first digit is a 1. In order to make this a more stable project, the amount would have to be quintupled, at least.
This is the obvious question to you: Would you consider supporting The Berlin Spectator?
Even small donations help. You can choose between one-time contributions and monthly ones. And you have the choice between Paypal and Patreon. You can check out our Donations Page first. Thank you.